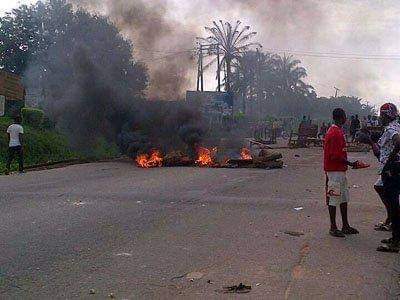 Twenty suspects have been apprehended by security operatives in connection with the crises in Ikare -Akoko and Owo in Ondo state.

The State Commissioner of Police, Mr Bolaji Salami, made this known while briefing newsmen in Akure over security situation in parts of the state.

Crisis erupted in Owo during the week when members of the Odua People’s Congress and members of a secret cut clashed.

The crisis has claimed two lives while two houses were set ablaze.

In Ikare, Chieftaincy crisis has caused unnecessary tension, forcing the state government to impose curfew in the ancient community.

Salami said the suspects would be charged to court anytime members of the Judicial staff Union of Nigeria suspend their ongoing strike.

The CP said that those involved in the crises in the two communities will not be allowed to go unpunished.

The Commissioner of Police, Ondo State Police Command, CP Salami Amidu Bolaji had on wednesday led other Heads of Security Agencies in Ondo State to visit the troubled Ikare-Akoko in Ondo State.

At the Palaces of the Chiefs of the two warring factions, CP Bolaji called for the maintenance of the existing truce that is already in place, saying Security Agencies in the State will not watch anybody taking the laws of the land into his hands, without taking decisive legal means of halting such misdemeanor.

On the curfew imposed on the Community, by the Governor of the State, His Excellency, Arakunrin Oluwarotimi Odunayo Akeredolu, SAN, CP Bolaji said the curfew is put in effect to prevent the escalation of the fracas which has seen many destructions as well as some fatalities within the short period it has lasted.

It would be recalled that Ikare-Akoko boiled up due to unnecessary rivalry amongst some chiefs in the Community, but to reduce the rate of escalated destruction, the Commissioner of Police, Ondo State Police Command, CP Salami Amidu Bolaji was quick to deploy his men to restore normalcy in the troubled Community.