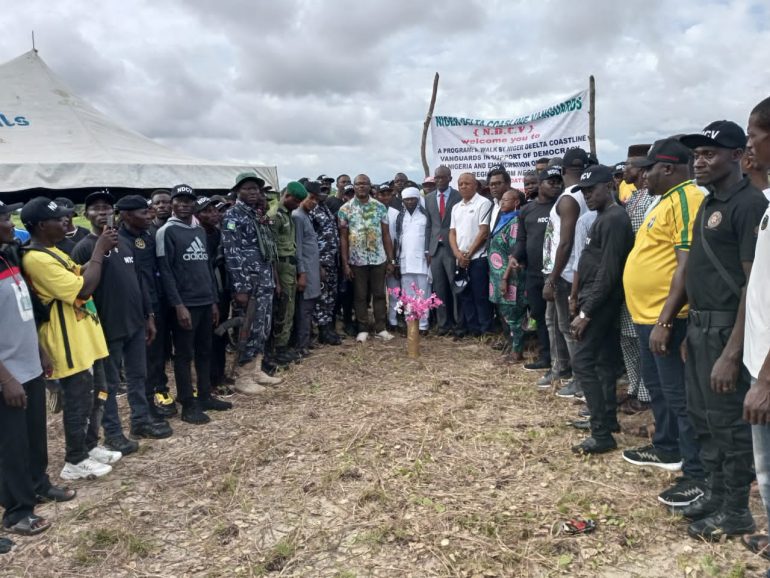 The group – Niger Delta coastline Vanguards (NDCV), has given conditions for supporting any of the presidential candidates in the 2023 general election.

One of the conditions according to the group of the agitators is that any candidate that will receive their nod is going to be ready to protect the group and its members’ interest.

The ex-militants and agitators under the leadership of Chief Omotuwa Job, the Akogun of Etikan Kindgom, insisted that the group would consult very well to know who to give endorsement among Presidential candidate.

The group made this known yesterday, Saturday 1st October, 2022 at a programme tagged “a walk by Niger Delta Coastline Vanguards in support of Democracy in Nigeria and Emmacipation of Niger Delta Region from Neglect” held at Ogo-Oluwayo community in llaje local government area of Ondo State.

Niger Delta Coastline Vanguards is the conglomeration of all the agitators in the states within the coastline of Nigeria.

In an address delivered by Barr. Olarotimi Omomuwasan Esq on behalf of the group, the agitators said, “we will support any Presidential Candidate in the forthcoming general elections, who is ready to protect the interest of the group and attend to the agitations of the group”.

“Through our findings, we recognized three major Presidential Candidates – Asiwaju Bola Ahmed Tinubu Of APC, Alhaji Atiku Abubakar of PDP and Peter Obi of LP, and by so doing, one out of these three candidates will be supported by our group in the forthcoming 2023 general elections, and we will only support whoever listen to our agitations.

“The devasting condition of the region as a result of oil exploration and exploitation is grossly incalculable to the degree that the traditional means of survival, such as fishing, farming and other means of survival have gone into extinction without superb government’s intervention for alternative means of survival by the people in the region.

“It would be recalled that we fought against the government and oil companies operating in our territory some years back to do the needful by ameliorating our condition. However, our actions and acts did not only cause huge loss to the government but to the oil companies and some other corporate bodies, and as a result of these huge damages, the Federal Government sought our understanding by calling several meetings through the Ondo State Government in November, 2017 that we should take path of peace in other for the Government to look critically into our yearnings and agitations”.

“Without any further delay, we agreed to the terms and conditions of the government by dropping our arms and ammunitions for grant of amnesty on the part of the Government by a way of skill acquisition programme, free education and other means of empowerment. Surprisedly, Government is yet to fulfill her part with the terms agreed upon since 2017 we had been disarmed”.

“Government is continuum and another opportunity to usher in another set of leaders who are to pilot the affairs of the country is far approaching and we have decided not to take a back seat but a front seat by causing our presence to be felt so that our agitations or yearnings against neglect would be timeoulsy attended to”.

The ex-militants and agitators under the leadership of Hon. Omotuwa Job, the Akogun of Etikan Kindgom are basically agitating that the hens that lay the golden eggs should be given what is due for it.

The leader of the group, Chief Job Omotuwa said the particular presidential candidate and other candidates to be supported by the group will be communicated to them after more consultations have been made.