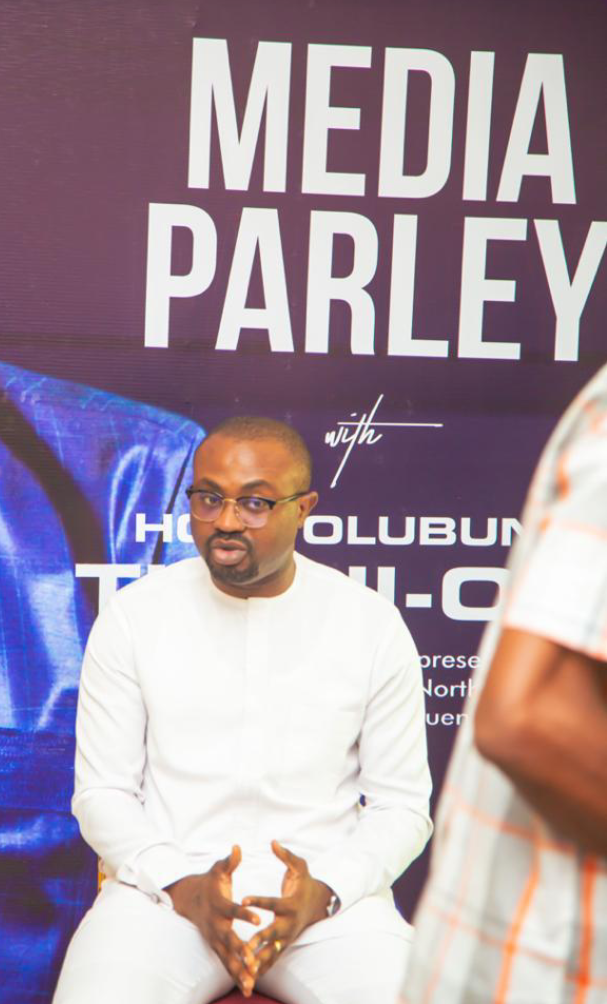 2yrs in office: Why I’m passionate about my constituency —Ondo Rep BTO

…….says “I will not relent until Ikare–Akoko is truly urbanised”

The lawmaker representing Akoko North East/North West Federal Constituency at the House of Representatives, Hon Olubunmi Tunji-Ojo has explained the reason why he is passionate about the development of his constituency in the last two years.

Tunji-Ojo who lamented that his constituency is one of the most backwards in terms of infrastructures and basic amenities in Ondo state, however said with the impact of the present administration of Governor Oluwarotimi Akeredolu coupled with his efforts, the narratives are now changing in the area.

Speaking at a Special Media Parley in Akure to mark his two years in office, the Federal lawmaker noted that he would continue to work to ensure that Ikare Akoko regains its status of urbanization.

The Chairman, House committee on NDDC said, “Anywhere in Nigeira,our yardstick for representation should be based on performance because poverty does not know a local government or a political party. If you are a poor man as a PDP or APC member, you are a poor man and if you are rich,you are rich regardless of wherever you are.

“So the basic barometer of life is about the standard of living of the people and that is what I think we should focus on and I want to believe that the leaders of Akoko Northeast and Northwest will rely on performance over sentiment when the time comes.

“As I said, it is not yet time to talk about politics now because that is not my priority. My at this point in time is to spend the next couple of years to see to the development of our people.

“My federal constituency is one of the most backwards infrastructurally in Ondo state but today, we are changing the narratives.

“We are solving challenges facing health sector in the area with provision of ambulances, mobile clinics and other equipment for the people to have better health service delivery.We have also equipped our hospitals with needed equipment worth over a hundred million naira.

“The question is ,two years ago, what was the status of the federal constituency and today,what is the status ? We have spent over 30million naira for free surgery from my own personal purse.

“So whenever any election comes,people should not judge me by the words of my mouth, but they should judge me by my performance.

“Ikare is the most urban area in Akoko land and the people of Akoko Northeast are not naive. They have the conscience to think about themselves and to know that the urbanization of ikare is what we have started and we are not relenting until ikare becomes truly urbanised in its real sense.”

According to Tunji-Ojo, “My biggest achievement is not being the member of House of Representative or being the chairman committee on Niger Delta Development commission, but it is the ability to put smiles on the faces of the people through effective representation”

The legislator who executed many roads, healthcare and educational projects as well as empowerment of his people in the last two years, advised against scrapping of the Senate, but stressed the need to ensure more funding of the National Assembly for greater performance.

On the 2023 general election, Tunji-Ojo insisted that he has no ambition to run for the seat of the Ondo North Senatorial district currently being occupied by a three term Senator, Prof Ajayi Boroffice.