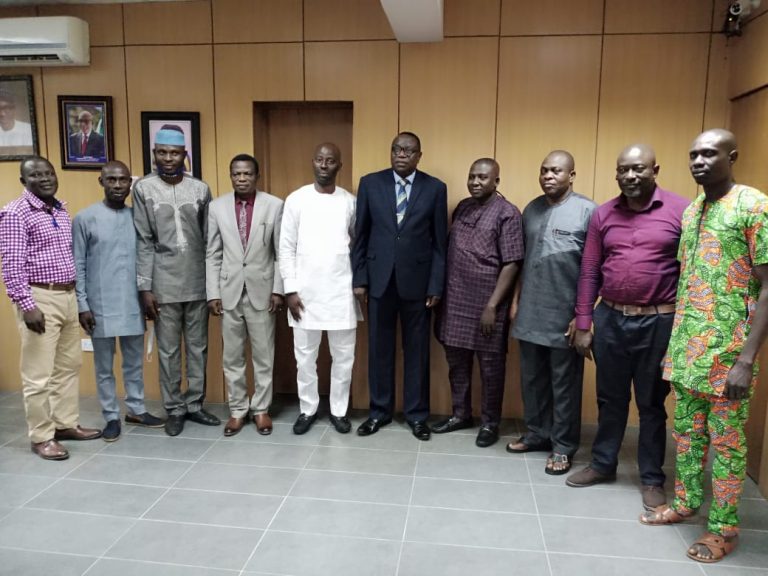 It was an Awesome Wednesday when the leadership of Adekunle Ajasin University, Akungba Akoko (AAUA) Alumni Owo and Akure Branches paid a courtesy visit on the New Vice Chancellor of the University Prof Olugbenga Ige on his emergence as the University’s sixth substantive Head.

The Akure Branch Chairman, Mr Alex Adeniyi congratulated the VC and expressed confidence that he’ll turn the fortune of the University for good.

He made some observations that are affecting members who are alumni from his branch based on complaints regarding their engagement with the University in the areas of transcript application process especially students copy, Certificate collection, Postgraduate programmes and also the University tuitions.

The VC expressed joy over the visit by the Executive members of the branches who came to his office.

The VC responded with assurances that most of those challenges have been surmounted with verifiable evidences.

The Owo branch Chairman Mr Saka Olokungboye who in turn spoke about the antecedent of the VC and his encounter with him during his undergraduate days,  narrated how the Prof Ige has been fair and firm to matters that concern students.

He urged the Vice Chancellor to use his good office to correct some irregularities being exhibited by the leadership of the umbrella Association.

In his response, the VC promised that a lasting solution would be proferred to the issues raised.

The VC appreciated the coming of the Akure and Owo branches to the University, reiterating that the university belongs to them and their positive impacts on the university will go a long way to project the image of the institution in a positive direction.