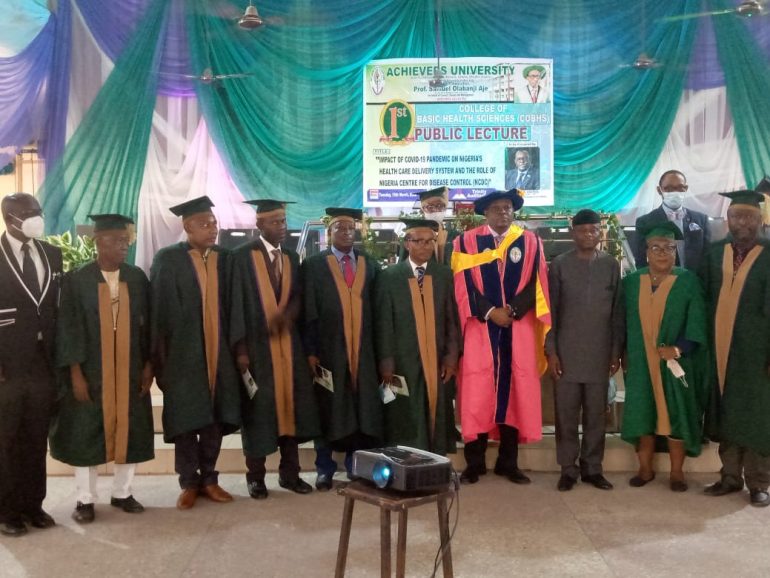 The Director General of Nigeria Centre for Disease Control (NCDC), Dr. Ifedayo Adetifa, has advocated for more research on Covid-19 vaccines, saying new findings by scientists will stem the tide of the virus.

The NCDC Boss, who projected into the future, and concluded that surest way to stave-off Covid-19 and its new variants currently bedeviling some part of the world is to scientifically x-ray the situation come up with a  vaccine.

Ifedayo stated this on Tuesday while delivering the First COBHS Public Lecture organised by College of Basic Health Sciences of Achievers University, Owo in Ondo State.

The lecture is titled “the impact of COVID-19 pandemic on Nigeria Healthcare delivery system and the roles NCDC” held at the University.

Ifedayo explained that NCDC played vital roles during the outbreak of the novel virus in March 2020, adding that Federal Government spent large amount of money to frontally tackle the pandemic just to safeguard citizens and non citizens.

In an incisive analysis on the outbreak of diseases in the country, Ifedayo stated that “2014 was Ebola, 2016 Polo reemergence  2017 was Meningitis & monkey pox, while in 2019 Lassa fever outbreak, 2020 COVID-19 was experienced globally and in 2021 cholera became a major pandemic in Nigeria.”

He further stated that over six million lives lost globally.

While giving the estimated money been allocated for pandemic, the NCDC Boss said, “By 2025, USD 28 trillion estimated cost to global economy, destroyed livelihood of millions, fractured societies and broken essence of normal life.

“Federal Government in collaboration with the States had devoted large chunks of their time and resources to inhibit the virus, this is even as the life expectancy is at 54% as at the year 2019”,  he said.

On his part, the Pro Chancellor of the Institution, Dr. Bode Ayorinde, acknowledged the spirited efforts of the University in making the virus reach its lowest ebb through the production of hand sanitizers.

He also said the Institution complied with all precautionary measures highlighted by medical experts in a bid to abrogate the pandemic.

However,  Ayorinde urged the students eschew restiveness, lure of lure and other forms of malaise.

The lecture was attended by members of the University Community including the institution’s Vice Chancellor, Prof Samuel Aje.