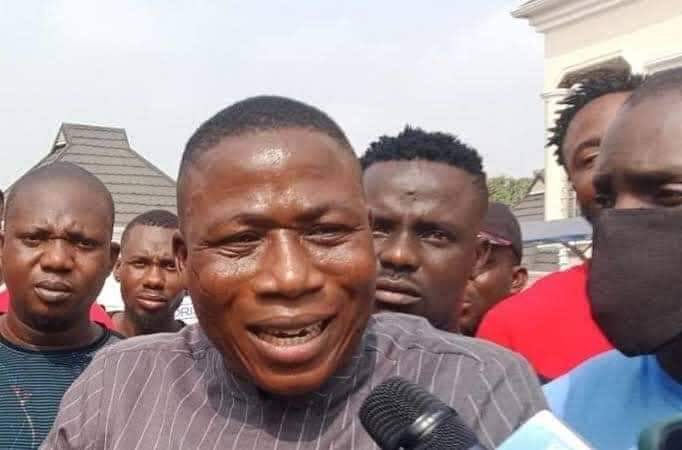 Igboho, who was arrested at Cadjèhoun Airport in Cotonou on Monday night, is being tried for immigration-related offences.

After three sessions, the court ordered the release of Igboho’s wife, Ropo, while the activist was returned to cell.

The sessions started at 10am and ended at about 8pm, but there were intermittent breaks during the hearing.

The hearing was adjourned till Friday, but it was gathered that the court might not sit today (Friday).

A member of Igboho’s legal team, Pelumi Olajengbesi, confirmed the development to The PUNCH on Thursday, adding that the team was hopeful that the court would grant bail to Igboho

Earlier, there was anxiety among supporters of the Yoruba Nation activist when he arrived at the court on Thursday.

A source said Igboho, who was arrested around 8pm on Monday by the International Criminal Police Organisation was arraigned for immigration-related offences.

The activist and his wife, were arrested at the airport when they wanted to catch a flight to Germany.

Recall that the Department of State Services raided Igboho’s residence in the Soka area of Ibadan at 1am on  July 1, 2021, arrested at least 12 of his associates and killed two others during the bloody raid.

The DSS spokesman, Peter Afunanya, later that day paraded the associates of the activist, displayed some passports including that of Igboho, AK-47 rifles, rounds of ammunition, African bulletproof vests, amongst others as exhibits.

The PUNCH had on Wednesday reported that Igboho’s predicament started when he issued and enforced a seven-day ultimatum on ‘killer herders’ in the Ibarapa area of Oyo State.

According to the report,   Nigeria’s Ambassador to the Benin Republic, and the immediate past Chief of Army Staff, Lt. Gen. Tukur Buratai (retd.), was pushing for the extradition of Igboho to the DSS headquarters in Abuja but Igboho’s lawyer, Yomi Aliyyu (SAN), insisted that his client could not be extradited because the 1984 Extradition Treaty between Nigeria, Benin and two others excluded political refugees like Igboho.

The PUNCH had reported that the Federal Government planned to extradite the activist on Wednesday but Benin Republic insisted that it would not be part of any process that was against due process.

Igboho and his wife have since been kept in police custody in Cotonou while his lawyers are in talks with the Beninise government to secure his release and stop his extradition.

On Thursday, many Yoruba-speaking supporters of the Igboho in the French-speaking country were seen at the court premises in solidarity with the 49-year-old activist.

The supporters were dressed in t-shirts which had inscriptions such as ‘Yoruba Nation now’, ‘Oduduwa Nation now’, amongst others emblazoned on them.

The Yoruba Nation proponents in Cotonou pleaded with the Government of Benin not to cave into pressure and extradite Igboho to Nigeria, alleging that the regime of the President, Major General Muhammadu Buhari (retd.), was desperate to crush Igboho and end the Yoruba Nation struggle.

One of the activist’s supporters, Mr Olorunwa Adekoya, said, “I am in Benin where Chief Sunday Igboho is detained. I saw him this morning and we spoke. I was not given enough time to speak with but he assured me that he is fine and there is no problem. His lawyers are with him presently. The law here is different from that of Nigeria where there could be miscarriage of justice. Igboho is not a terrorist.

“He is not a murderer or a kidnapper or a rapist. There was no case of murder at any of our rallies back in Nigeria. We appeal to the Beninise Government not to release him to the Federal Government of Nigeria.

“I urge all Christians, Muslims, and traditional worshippers to pray for Igboho. The attainment of Yoruba Nation will benefit Benin Republic a lot because Nigeria has foisted difficulty on Benin Republic by blocking the borders between Nigeria and Benin Republic, thereby stalling regional trade activities along the axis.”

Another supporter, who identified himself simply as Comrade Fatayo, said, “Sunday Igboho is a freedom-fighter and there is no evidence of murder against him. I appeal to those in authority here in Benin Republic to release him because if the government here hands him over to the Nigerian government, we do not know what would happen thereafter.”

“I implore the Government of Benin Republic not to extradite Chief Sunday Igboho because we all know what the Nigerian government is capable of doing,” Comrade Eniola added.

When contacted, a member of Igboho’s legal team, Pelumi Olajengbesi, told The PUNCH on Thursday that the team was hopeful that the court would grant bail to Igboho.

When asked whether Igboho would get bail in court, the lawyer simply told our correspondent, “We are hopeful”.

Olajengbesi restated his conviction that Benin Republic had shown itself to be a country that respects the rule of law and due process.

“The disposition of Benin Republic is that it is a country that respects the rule of law. We are making efforts that he is not repatriated wrongly to Nigeria. We are ensuring that everything is done in accordance to the law and we are very hopeful that we would succeed,” he stressed.

Former Director-General of the Nigerian Institute of International Affairs, Prof Bola Akinterinwa, said the Federal Government of Nigeria could not arm-twist Benin Republic into extraditing Igboho.

He said this was because Benin Republic, like other former French colonies, represents French interest in West Africa. Benin Republic (formerly known as Dahomey) gained full independence from France on August 1, 1960.

The diplomat, who spoke while featuring on PUNCH Online interview programme, The Roundtable, also advised the Federal Government to stop the use of force on agitators and explore amicable resolutions.

Responding to a question on the programme, the septuagenarian said, “At the level of Benin Republic, if you are talking about arm-twisting, an elephant, even a lion, as big and powerful as it is, if it is bitten by a small mosquito, then you can know the consequences. It is not a question that Nigeria is big and powerful that you can arm-twist anybody, no, it doesn’t work that way.

“So, even if you close borders all along, borders are not closed against the immediate neighbours, they are also closed against the French. So, any battle, any arm-twisting that you are thinking of should be put in the context of French interest and particularly the Francophone interest.

“Any misunderstanding between a Francophone country – whether an immediate neighbour or far distant neighbour – is necessarily an issue at the level of Nigeria and the Francophone community; they think alike, they work together, they address issues together.”