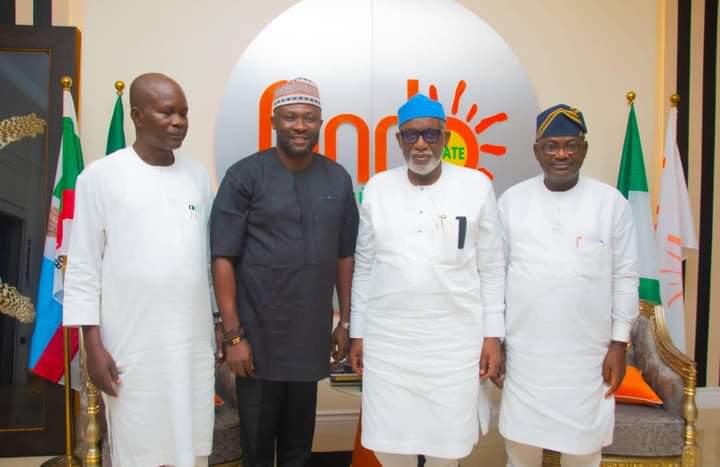 Ahead of the Ward Congress of the All Progressives Congress (APC) holding today Saturday, July 31, 2021, Ondo State Governor, Arakunrin Oluwarotimi Akeredolu, SAN, has received members of the congress committee.

The Chairman of the congress committee who is a former Governorship candidate of ADC in Ogun State, Gboyega Isiaka and the committee secretary, Lanre Balogun arrived in the sunshine state on Friday.

There are 203 wards across the state where ward congress will hold to elect new party executive to pilot the affairs of the APC.

As the ward congress of the ruling All Progressives Congress (APC) holds on Saturday, the Caretaker/Extra-Ordinary Convention Planning Committee (CECPC) of the party has warned against any move by members or group to organise parallel congresses.

The Secretary of the Caretaker Committee, Senator John Akpanudoedehe, in a two-page notice in Abuja to all members on Friday, said such individual or group risk being sanctioned.

Akpanudoedehe reminded all party members and stakeholders of the National Executive Council (NEC) resolution of 8th December 2020, which he claimed subsists and extends to the conduct of party members during the congresses.

The party said: “For purposes of clarity, may I re-state the relevant point in the resolution to wit: All pending litigations instituted by members against the party should be withdrawn forthwith, and going forward, no member should institute matters against the party, without exhausting the internal mechanism for conflict resolution, as enshrined in the party’s constitution”.

“Consequent upon the above, party members should please note that:

“(i) All activities that may be carried out by persons to put the party and its officers in a bad light, before, during, and after the congresses should be jettisoned.

“(ii) All activities or processes leading up to the congresses and thereafter which do not have the approval of the CECPC are exercises in futility. This is to say that: any purported; parallel congress, a parallel party organ, and or parallel party office, is, to say the least, a nullity.

“These divisive activities will not be tolerated.

“(iii) For the avoidance of doubt, the party shall deploy the full weight of the law as stipulated in section 21(D) of our party’s Constitution on anyone who perpetrates such unlawful Act(s) and also on their sponsors.

“All persons who are affected by Article 31 of our Constitution should apply for waivers as stipulated under sub. Section 3 of the said Article 31, is also clearly spelled out in the “Special provisions” of our guidelines.”