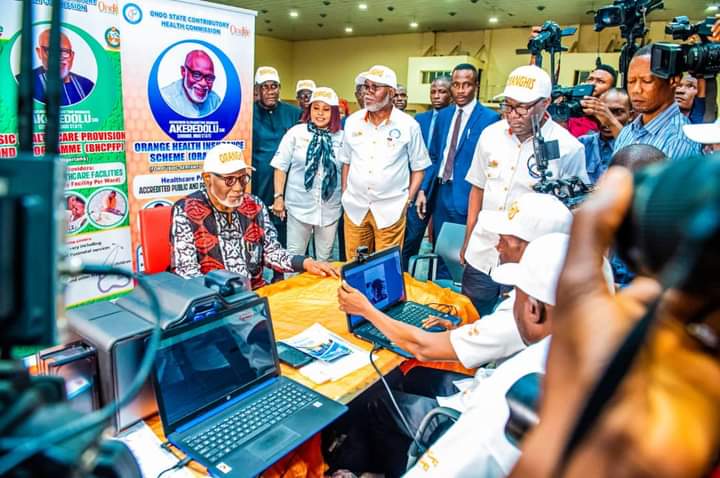 Similarly, this has also prompted the Governor to establish a permanent office complex of the Scheme in Akure.

Governor Akeredolu in his address opined that healthcare delivery system is in line with the fifth point of the REDEEMED agenda – “Effective Healthcare and Social Welfare”, so the Orange Health Insurance Scheme (ORANGHIS), designed for all political office holders and civil servants in Ondo state.

“The delight of any Governor in a developing country like Nigeria, is to be able to create a sustainable funding mechanism that lowers the financial barriers to healthcare for the citizenry.

“To this end, we have continued to demonstrate political will since on 6th February, 2018, when I signed into Law, the Bill establishing the Ondo State Contributory Health Commission and the Ondo State Contributory Health Scheme in response to the pressing global need to attain Universal Health Coverage (UHC) in accordance with one of the Sustainable Development Goals (SDGs)”.

“You will recall that we have begun the implementation of health insurance by paying the premium for pregnant women and children below the age of five years through a budgetary line for the Abiyamo Maternal-and-Child Health Insurance Scheme (AMCHIS) – the first health insurance product. I am glad to inform you that the Abiyamo scheme since 3rd December, 2019 till date, has recorded over 24,200 beneficiaries who have not had to pay a kobo for antenatal care, delivery services (including Caesarean Sections) and other allied services”.

“Thereafter, we approved the release of the State’s counterpart fund to the Federal Government-funded Basic Health Care Provision Fund Programme (BHCPFP) in order for another set of vulnerable persons in Ondo State to enjoy robust healthcare services.

“Today, 20,560 enrollees, made up of widows, retirees, aged, indigents, women and children below five years are the six categories of beneficiaries receiving care at the 203 Primary Health Care Facilities (1 per 203 wards) with referrals to general hospitals when required under the BHCPF programme. The beneficiaries pay no kobo for medical, surgical, gynaecology and several other health care services”.

“We are, therefore, glad that the Ondo State Contributory Health Commission has taken the health insurance conversation a step higher with the third product called Orange Health Insurance Scheme (ORANGHIS) which we are to officially kick-start for all public servants in Ondo State. In spite of the obvious economic constraints across Nigeria, we approved the joint contribution of 3% of gross salary of each public servant under a sharing ratio of 1.8% by the State Government and 1.2% by individual public servant, as the premium for a family health insurance plan, covering each public servant, one spouse and four biological children below the age of 18 years.

“It is on record that we are the only State Government, in recent times, that is taking up the responsibility of a larger percentage (60%) of the health insurance premium for public servants. We made the commitment to do so as part of the social welfare promise under the REDEEMED agenda”.

“I am aware that enrolment of public servants under ORANGHIS has commenced at a time that many of them truly need healthcare services which they cannot afford. It is a known fact that we are daily inundated with financial requests for health care. So, your little contributions under ORANGHIS have combined to form a pool of funds from which anyone of you who requires any of the health care services covered by the scheme would not have to pay a dime. Our government-owned and privately-owned hospitals that have been accredited under ORANGHIS would also soon wear new looks”.

Governor Akeredolu that the State Government’s percentage contribution and the premium deductions from public servants’ salaries to the Orange Health Insurance Scheme shall not wane.

“Furthermore, a fourth health insurance scheme known as Sunshine Health Insurance Scheme (SUNSHIS) for the informal sector that makes up about 95% of the population shall also commence in the nearest future to cover artisans, market women, commercial transport operators etc.

“I am also aware that pensioners and students shall have their own scheme too. This means that every resident of Ondo State will be brought into the safety net of the Universal Health Coverage”, Akeredolu said.

“It is a new dawn in Ondo State Public Service and health care delivery space as we get ready to commence access to healthcare under the Orange Health Insurance Scheme (ORANGHIS).

“Our robust ICT infrastructure has created a personalized health insurance page for every enrolled public servant. The benefit package (covered healthcare services) and guidelines on how the ORANGHIS scheme works shall be made available to all”.

The Commissioner for Health, Dr. Banji Ajaka in his address, stated that the Orange Health Insurance Scheme has brought light to the public service of Ondo State with it’s unique plans aimed at reducing the frequency of absenteeism from civil service due to sickness, prolong the lives of workers, increase the productivity of civil servants and political office holders and save the workforce from falling into poverty when they need health care.

Ajaka said, “From the creation  of the Ondo State Contributory Health Commission 3 years back, continuous development of the University of Medical Sciences Teaching Hospital, recent purchase of multi-million naira worth of medical equipment for some of our Primary Health Care Facility, establishment of the Ondo State Drug and Health Commodities Management Agency and to the commencement of the Orange Health Insurance Scheme today”.

Ajaka stressed that Governor Akeredolu’s tenure haa made giant strides in the health sector of Ondo state through the unassailable political will and commitment.

Prof. Dayo Faduyile, the Special Adviser to Ondo State governor on Health matters, stated in his remarks that the Orange Health Insurance Scheme  established for the public servants in Ondo State is the most pragmatic way to solving workers’ dwindling helath indicws, as out of pocket payment doesn’t health has failed woefully.

“I am sure with the success of the ORANGHIS, that our visionary Governor, Arakunrin Oluwarotimi Akeredolu, SAN, would ensure that the informal sector made up of market women, artisans, transport workers etc. and also students across our varioud Schools be captured in the next few months,” the SA said.

In his remarks, the state Head of Service, Pastor Kayode Ogundele, said workers’ welfare initiatives of Governor Akeredolu in Ondo State can be described as impactful, touching critical aspects of workers’ lives.

Ogundele said the formal launching of the scheme would enable workers in the state and their dependants to join the train of beneficiaries of easy access to quality health services.

While congratulating the workers for joining the beneficiaries, the Head of Service thanked the governor for embarking on such a welfare programme at this time despite the present economic challenges.

“Inspite of the glaring economic challenges, Mr Governor decided that the State Government will take up a significant part of the premium contribution of civil servants to enable them enjoy access to qualitative health care whenever the need arises,” Ogundele noted.

“From access to housing loans through the Federal Housing Scheme, to contributory pension schemes that ensures a peaceful retirement transition, and now to health insurance that will improve workers’ productivity and reduce untimely deaths among government workers; the State government continues to show more than a passing interest in our comfort and happiness. Remember, in all of these welfare innovations, the State government also has a corresponding financial commitment which it continues to meet.’

“In addition, health insurance is particularly important because it will significantly reduce the percentage of our salaries that we spend on health care services,” He added.

Also speaking at the event on behalf of the organised labour in the state, the Secretary of the Nigeria Labour Congress, NLC, Comrade Omokehinde Shado appreciated Governor Akeredolu for bringing the state to a global stage of best practice in health care delivery through his initiatives.

Shado particularly lauded the governor for conceding to payment of 1.8 per cent by the government while individual contributors would only pay 1.2 per cent of the total contribution.

The NLC Secretary assured the gathering that the labour movement in the state would continue to be a progressive partner with the state government.