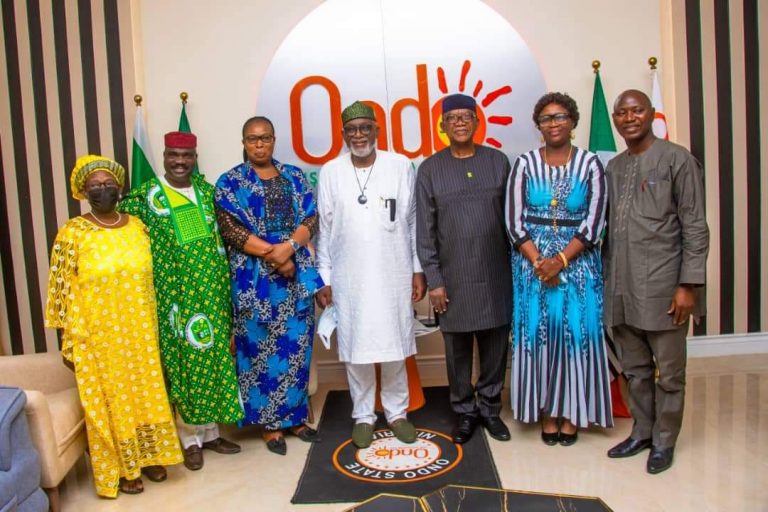 ….. As Pharmacists Pay Thank-You-Visit To Gov Over Appointment Of Colleague, Aladenola, As Perm Sec

Ondo State Governor, Arakunrin Oluwarotimi Akeredolu Aketi, SAN, yesterday expressed his readiness to promote all professions in the state, saying everyone must be given a fair chance.

The Governor spoke during a ‘Thank-You’ visit by Pharmacists in the country led by the National President of Pharmaceutical Society of Nigeria (PSN), Mazi Sam Ohuabunwa, and Association of Community Pharmacists of Nigeria (ACPN) also led by its National Chairman, Pharm Samuel Oluwaoromipin Adekola.

Governor Akeredolu noted that both Medical doctors and Pharmacists are in the same profession, stressing that no discrepancy should exist between the two.

Speaking on the appointment of Pharmacist (Mrs) F. B Aladenola as Permanent Secretary, Ministry of Health, the Governor said he had no hesitation because of his belief that she can do the job.

He enjoined the Pharmacists and everyone to support her while lauding her efforts, particularly at the public hearing on the bill for Ondo State Drugs and Health Commodities Management Agency.

Earlier, the National President of the PSN, Mazi Sam Ohuabunwa, presented an appreciation letter to the Governor in expression of their heart felt gratitude over the appointment of one of their own as Permanent Secretary.

He thanked the Governor for giving equal opportunity to all health care professionals to advance in their careers in the state public service.

According to him: ”I’m glad to lead this delegation to say thank you. We see it as a favour but you may not see it so. I’m sure you did what is right. I’m glad that you are setting good examples.”

The National President of ACPN, Pharm. Samuel Adekola described the new Permanent Secretary as a pride to Pharmacists across the country.

He thanked the Governor for blazing the trail and setting good examples.