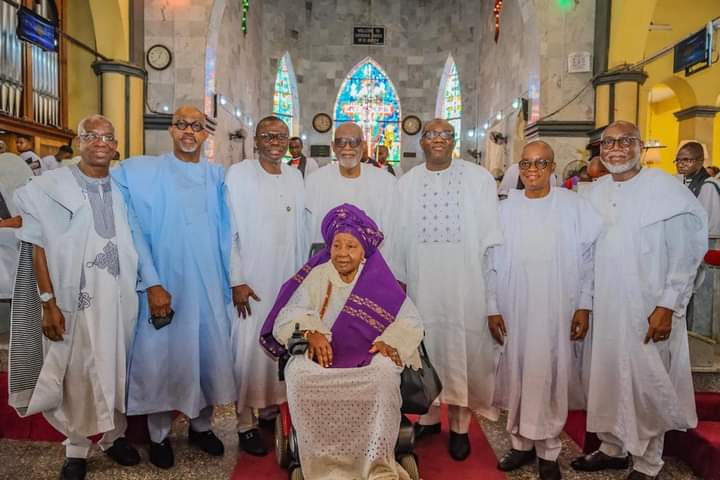 The ancient town of Owo in Owo Local Government Area of Ondo State was agog on Saturday as dignitaries from all walks of life stormed the town to celebrate the mother of the state Governor, Lady Evangelist Grace Akeredolu, who clocked 90 years recently.

The expansive Cathedral Church of St. Andrew, Imola, Owo, was filled to the brim.

Other eminent personalities who graced the event were Wife of the Governor, Arabinrin Betty Anyanwu Akeredolu; Deputy Governor, Hon. Lucky Aiyedatiwa; members of the state House of Assembly led by the Speaker, Rt. Hon. Bamidele Oleyelogun; Judges of the State High Court; Chairman of the All Progressives Congress in the state (APC) Engr. Ade Adetimehin; members of the state executive Council led by the Secretary to the State Government, Princess Oladunni Odu; and Chairmen of local Governments.

In his sermon, Bishop of Owo Anglican Diocese, Rt. Reverend Stephen Fagbemi, who spoke on “celebrating 90 years of uncommon Grace in the life of Grace”, noted that the kindness, love, grace and blessings of God are the factors that have kept Lady Evangelist Grace Akeredolu alive in good health and joy.

He charged the congregation to be careful not to abuse the grace of God in their lives but make judicious use of it for the benefit of mankind.

The Bishop congratulated Mama Akeredolu and prayed God to continue to sustain her in good health, favour and sufficient grace as she continues with the journey of life.

In his remarks, the first child of the celebrant who is also the Governor of Ondo State, Arakunrin Akeredolu, appreciated God for the grace which his mother has received so far, noting that she has lived well.

In her remarks, Arabinrin Betty Anyanwu Akeredolu described Lady Evangelist Akeredolu as a prayer warrior who loves her children wholeheartedly.

Some of the children and grandchildren of the celebrant including Prof. Oluwole Akeredolu, Kola Akeredolu, Oluwafemi Akeredolu and Modupe Adeyinka appreciated God for keeping their mother alive in good health to celebrate the landmark 90th birthday.

Royal fathers at the event include Olowo Of Owo, Oba Ajibade Ogunoye; Deji of Akure and chairman of the Council of Obas, Oba Aladelusi Aladetoyinbo; Osemawe of Ondo, Oba Victor Kiladejo; Olugbo of Ugbo, Oba Fredrick Obateru; Olowa of Igbara-Oke, Oba Francis Adefarakanmi Agbede; among others.