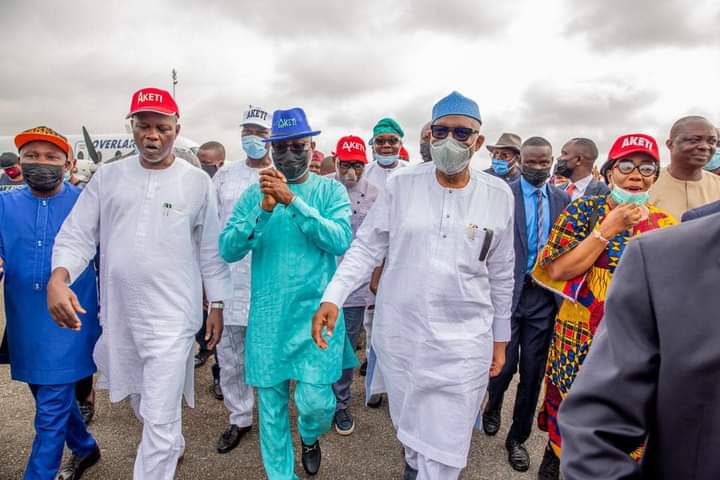 Mr. Ado Philip Adeboye, an Akure-based media practitioner of Akungba extraction has commended the laudable effort of the Ondo State Governor HE, Oluwarotimi Akeredolu SAN, for the Provision of road infrastructure and other social amenities which has transformed the one-time serene Akungba Community from a village setting to a varsity city.

The official statement of appreciation of Mr Ado Philip Adeboye to the governor and the Royal Father of Akungba made available to newsmen.

He said, “After several years of forlorn yearning for sustainable development hinged upon the able leadership of our indefatigable governor Oluwarotimi Akeredolu SAN añd the paramount ruler of Akungba Community in the last five years since his installation as the substantive Oba of Akungba by the Ondo State Government in 2016, our Community has continued to wear a new look of positive development; despite decades of desperate yearnings for a hub of peace.”

The statement continued: “In time past, animals most especially goats used to sleep on the main road that crisscrosses the Community. But now, the hitherto semi village is fast urbanizing and shaping up as a bubbling city.”

“Today, the Varsity town of Akungba has practically enlarged in leaps and bounds, both in population and commerce. No wonder the advent of nightlife in town.”

Meanwhile, he observed that urbanization no doubt comes with it’s own natural social menaces: insecurity, drug abuse, cultism, road accidents and other malaise.

He added that these aforestated man-made afflictions have often kept both the government and the town administrators wide awake at night. Not even the Palace is spared of such constant pressure for conflict prevention and resolutions.

However, Mr Adeboye explained that despite the odds, HRM Oba Adeyeye has brought youthful vitality and administrative sagacity to the Throne of his forebears. He’s been deploying proficiency and efficiency to build and expand the coasts of unity and development in the land.

He stressed in the statement: “The courageous- but-compassionate Royal Father is continuously bridging relationship gaps amongst Akungba indigenes, at home and abroad. And his open-door policy is yielding bountiful fruits.”

Speaking further, he remarked: “The positive role that Akungba people in Diaspora are playing in alleviating poverty and uplifting the community, is a pointer to the humble but influential leadership provided by the Alale.”

Meanwhile, he said: “This is not to paper over certain cracks in our communal wall. There’s still room for cementing strained relationships. With the creation of further understanding, hopefully, the remaining areas of conflict in our society shall be rectified with all hands on the deck of peace-making.”

He maintained that Commendably, the accord between Adekunle Ajasin University, AAUA, and the host community has been cordial and mutually rewarding. All thanks to the efforts of critical stakeholders.”

While Speaking on the social front he said: “Socially, Akungba has witnessed many high-class events. Some of them were the installation of chiefs, a celebration of traditional art exhibitions and l participation in communal religious prayer sessions.

“All these have beamed global attention on the hitherto obscure town, which is now a darling of the media.

Currently, Akungba is believed to be the most branded town in Ondo State, with her 30-minute documentary shown 15 times on NTA Internationally (search YouTube Akun Day Festival 2019). Ondo State radio and television have also done eloquent promotion of the town. Not even the print media are left out.”

Mr Adeboye emphasized that Under the charitable umbrella of Oba in Council, the controversial Feast of Yam Festival (Odun Ijesu) in Akungba has been repackaged, repositioned and re-focused as a certified NGO with verifiable and accountable banking identity. The maiden edition of Akun Day Festival (ADF) in 2019, he posited is still a talk in the park.

He pointed out that For the first time, Akungba joined the calendar of the National Council for Arts and Culture, NCAC.

ADF he disclosed is a cultural tool for building peace and unity for community development..

According to him, Constitutionally, ADF also has the mandate for people’s welfare and their wellbeing. This was auctioned in 2020, when ADF collaborated with kind-hearted Akungba Leaders Forum members, to distribute food and healthcare materials worth nearly N3m. The COVID-19 palliative, supervised by the Palace, covered the nooks and crannies of our town.

Adeboye acknowledged in his appreciation statement: “Apart from the Covid pandemic agony, our town was also driven down the deadly lane of sorrow – no thanks to series of fatal road mishaps that killed and maimed many in the year past.”

He commended the Royal Father of Akungba saying: “As part of the ameliorating strategies, Kabiyesi sought the assistance of the State Government to enlarge the highway that sliced the town in halves (now in the works). A barricade was promptly erected to prevent heavy-duty trucks from wrecking further havocs in the varsity Community”

He stressed: “It is vital at this juncture to call upon all stakeholders to work in concert with our young-and-dynamic Oba Adeyeye, to push up the bar of unity in diversity for the equitable development of Akungba community.

“Humanity will hardly make progress without people’s ability to share understanding and grow progress. Our past is preservable, the present adjustable and the future predictably profitable,” he concluded.