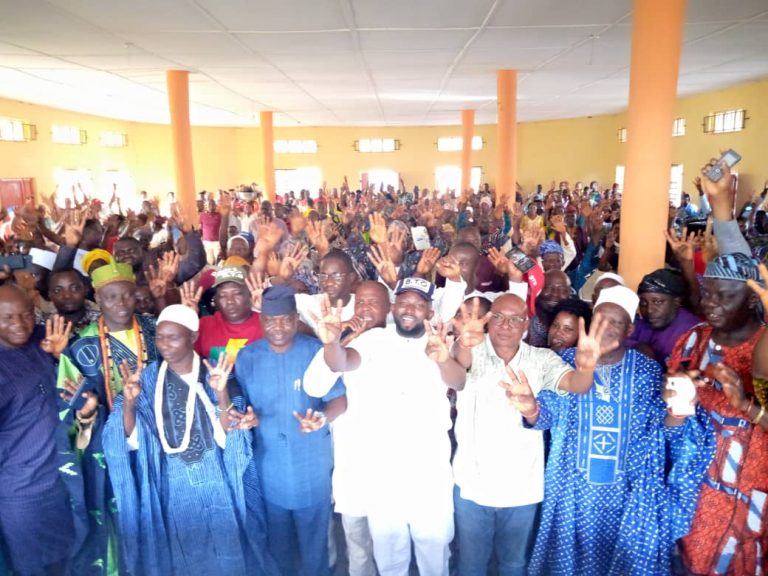 …Extols His Developmental Strides In The Constituency

The Leaders stressed that Tunji-Ojo has performed beyond their expectations and they felt the only way to repay him is to reelect him as their representative again in 2023.

The Chairman of Akoko North West Local Government, Elder Samson Akande noted that “there is no need to change a winning team”.

According to him, “Tunji-Ojo has shown the need for us to support him to continue his good works. Anyone who sees what he’s done under 2 years will be shocked. There is nothing we can say to quantify what he has done.

“What Ogbagi community has done today particularly impressed me. I would urge other towns to do the same considering what he has done. I am happy that Ogbagi as a very large community has endorsed Tunji-Ojo.

“There is nothing like rotation. Like the king (Owa of Ogbagi) just said, in all the representatives we’ve had, he is absolutely the best, so the issue of rotation does not arise.

“How do we change the winning team? I implore our people to choose good work over a non existing zoning. He has only spent 2 years, I am sure that his second term will help turn our Federal constituency around.”

While speaking on behalf of the Traditional Institution in the community, the Owa of Ogbagi, Oba Victor Adetona (Odagbaragada III) said the reward for good performance is reelection and that Tunji-Ojo has earned the trust of the community.

He said, “For a person to have influenced 9.6km road project for us is huge and the road will be very important for the economic growth of our community.”

“He also proposed to build a multipurpose Hall for the community and also get a befitting building for the (NSCDC) in the community. He secured employment and scholarships for our children”

“He has done what the past house of representatives members in our constituency have not been able to do.”

“We are going to support him for second term and in few years time, he is a potential Governor of Ondo State”

The Convener of the event and an aide to Rep. Bunmi Tunji-Ojo, Hon. Thalis Apalowo appreciated the community for the immense supports and highlighted the projects going on in the community and the proposed projects.

According to him, Tunji-Ojo is a citizen of Ogbagi Akoko as citizens are those who contribute to the development of the land.