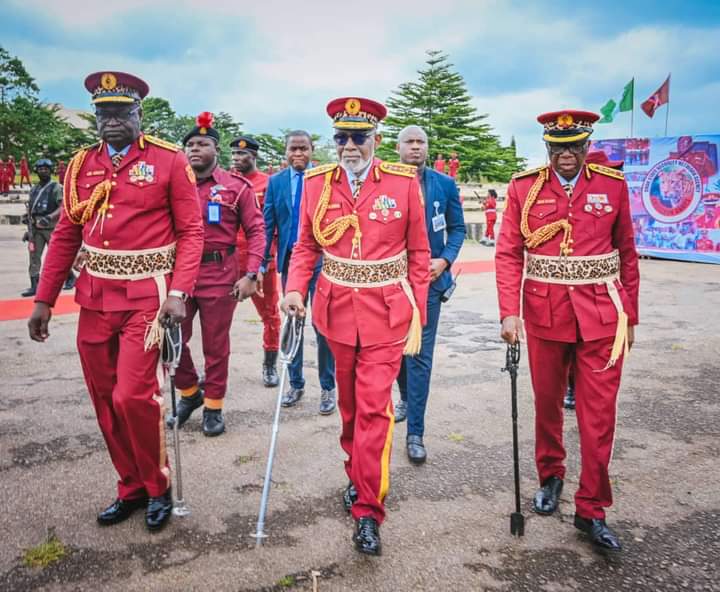 The Governor of Ondo State, Arakunrin Oluwarotimi Odunayo Akeredolu SAN has said that the Ondo State security Network Agency, Code named Amotekun Corps, will be armed as backed by law, otherwise, the training will be inadequate and the lives of great patriots will be placed in danger.

The Governor made this known today during the passing Out Parade of Course 3 and 4 of Amotekun Corps.

He stressed that his administration will continue to support the operational capacity of all security agencies in the State both in terms of equipment and the welfare of their personnel, adding that the passing out ceremony is a reminder of the need to strategize and tackle the current security situation, which he said has been left to snowball into existential crises across Nigeria.

Akeredolu said, “The Western Nigeria Security Network, AMOTEKUN CORPS, as a response, is now not just the first line of defence, but the ultimate bulwark in the protection of a way of life and civilization”.

“The efforts of our determined and valiant Amotekun personnel since inception must be underscored, encouraged and highly commended. We must all rise at this time to acknowledge their efforts.

“On our part, we will continue to support the operational capacity of all security agencies in the State both in terms of equipment and the welfare of their personnel.

“The recent donation of 50-fitted patrol vehicles is a testament to our resolve to be up-to-date in fighting crime and criminality because, without a secured environment, there can never be visible and sustained development”.

“It is not only absurd but also a dereliction of duty and a cause of disaffection. Dissatisfaction is induced by a feeling of unfairness. The crisis in conventional wisdom is life-threatening and nationwide. Therefore, it is unacceptable if the state sanctions differing rules of engagement for different sub-national governments.

“Those passing out today have undergone rigorous training at great expense to the state. The training will not end here it will be continuous. However, no amount of training will mask the debilitation of fighting with one arm tied against implacable foes”.

While congratulating the celebrants, the Governor urged them to take their work serious, do well and have zero tolerance for bribery,ensure prompt response to distress call, avoid abuse of power as all eyes are on them and no form of misconduct shall be tolerated.

In an address, the Ondo State Commander of the Amotekun Corps who also doubles as the Special Adviser to the Governor on security matter, Akogun Adetunji Adeleye, noted that “this year’s POP is one of a kind, first, because of the large number of officers that have turned out and secondly, because it’s the first time since the Corps came on board that they will be having a working arrangement in the third tier of government to ensure that no community is left behind as far as security cover in Ondo State is concerned.”

Adeleye said, “This arrangement is no doubt a novel initiative spare headed by Mr Governor himself, the strategic measures to combat the terrorist dimension which insecurity has ensued.

“The event of Sunday, June 5 this year at St. Francis Catholic Church, Owo is still one that we hope and pray doesn’t happen again. We hope to use this recruitment exercise to strengthen our intelligence gathering capacity so that hands nipped at the board before it is carried out”.

“We will continue to explore areas of mutual benefit with sister security agencies in our quest to raise the bar of safety in the land. Mr Governor, very eminent personalities present here, I wish to take this medium to highlight some of the milestones we have attained between last year and now,” the Commander said.

Adeleye opined further that “The essence of this is to present to you and members of the public as scorecard and to enlist the support of all and sundry towards improving on our performances”.

“We are not yet there until we have a completely safe and secured society where each one can realize their dreams and aspirations. One key achievement in the last one year is in the view of our principal law to accommodate emerging crime realities in the latest amendments, we are now fully empowered to prosecute suspects without legal battlements”.

Adeleye appreciated the legislature for the support as well as the judiciary on the sister institutions for fast tracking the dispensation of cases brought before them that are legal team. “Your promptness in the delivery of judgment is worthy of commendation.

“This is so as one of the reasons for the rise in criminality is the delay in criminal prosecution processes and we are happy that the Ondo State Judiciary is giving Amotekun Corps the needed support to reduce such propensity. I say a very big thank you to the honorable Judge and his team for creating the enabling environment for this to happen”.

He also appreciated the support of the state government through the provision of operational equipments and logistics to enhance not only the effectiveness of Amotekun corps but the entire security architecture of the state, adding that the corps have enjoyed the support of heads of security agencies in the State and the donation of a fully fitted patrol vehicles as no small measure boosted their morale”,

While lauding Mr Governor for his gesture and laudable initiative, Adeleye appealed to the Governor to consider those agencies who are yet to be captured in the next batch.

The passing out parade which took place at the Gani Fawwhinmi freedom Arcade had in attendance, the speaker of the Ondo State House of Assembly, Rt. Hon. Bamidele Oleyelogun, House of Assembly members, local government chairmen, commissioners, royal fathers, head of security agencies among many others.