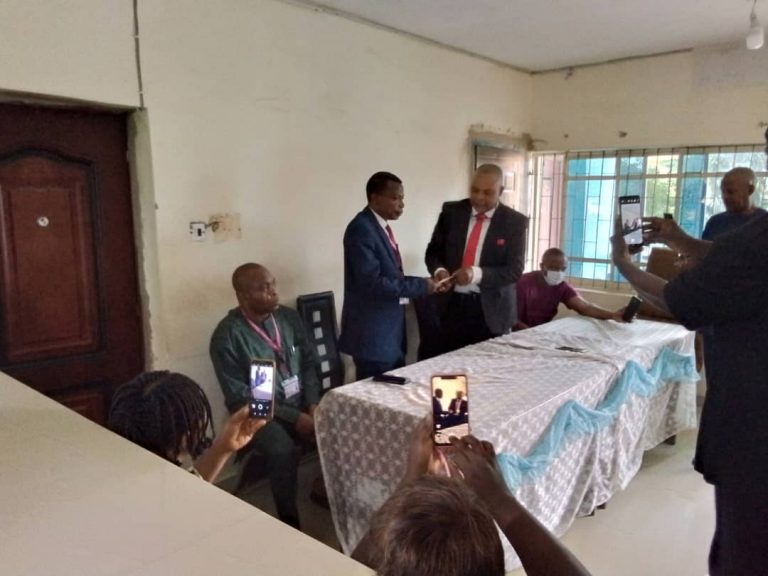 Ondo State government has awarded scholarships to the children of the deceased Official driver of the Government House and Protocol, Mr. Adeleke Ajiboye who died in a fatal accident that involved the then Chief of Protocols to the State governor on Ilesha/Akure express way early this year.

The Scholarship awards to cover the children’s tuition fees, accommodation and other needed items throughout their school periods in University is to assist and support the children of the late official driver, Mr. Ajiboye, in their academic endeavours.

Earlier, the first child of the late official driver, Master Adeniyi Ajiboye, a graduate of Mechanical Engineering had since been offered automatic employment by the Ondo State government on the approval of the State Governor, Oluwarotimi Akeredolu, SAN.

Presenting the cheque for the Scholarships of the Children of the deceased driver to the Management of the Adekunle Ajasin University, Akungba, Akoko on behalf of Ondo State Governor, Arakunrin Oluwarotimi Akeredolu, SAN, at the Office of the Ondo State Scholarship Board Complex, Alagbaka, Akure , the Permanent Secretary, Ondo State Scholarship Board, Mr. Joshua Folayemi said the Scholarship Awards which was graciously approved by the governor, Oluwarotimi Akeredolu, SAN, was to show a special consideration to the Children of the late official driver throughout their studying at school. He charged the Children to reciprocate the good gesture with better academic performance so as to attain the best for their good living.

Receiving the cheque for the Scholarship Awards for the children of the deceased driver; Miss Oluwatosin Ajiboye, 24, studying Integrated Science / Education and Miss Opeyemi Ajiboye, 21, studying law at the Adekunle Ajasin University, Akungba, Akoko respectively, the Registrar of the University, Mr Olugbenga Arajulu and the School Bursar, Mr. Orina Tobi on behalf of the Management of Adekunle Ajasin University, Akungba, Akoko appreciated the State government for the kind gesture adding that the University Community would ensure that the two children received the desired attention throughout their study periods in the academic Community.

The late Official driver of the Government House and protocol department, Mr. Adeleke Ajiboye was survived by three children and a wife, Mrs Hellen Ajiboye, a petty trader.

Present at the occasion were the representative of the Ondo State Head of Service, Pastor John Adeyemo and Mr. Richard Aina representing the office of the Government House and protocol, Governor’s office, Alagbaka, Akure.

Others were the Director Accounts, Ondo State Scholarship Board, Mr Ibrahim Adebayo Olabanji, the Deputy Director, Scholarship, Mrs Ikubuwaye Mosunmola, all members of staff of the Board and the immediate family of the deceased, Mr Adeleke Ajiboye.