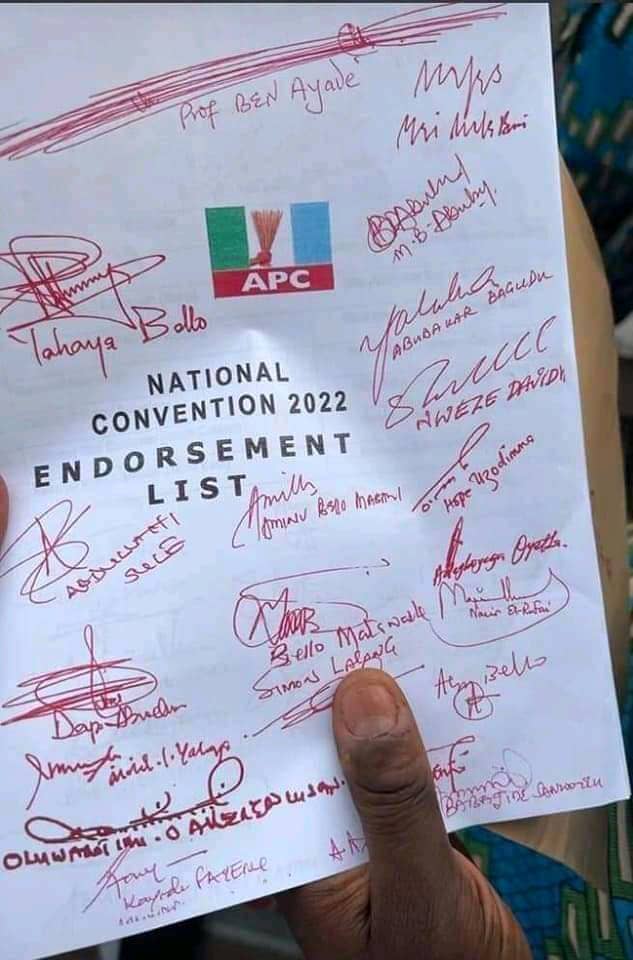 The list has the names of those who will form the next National Working Committee (NEC) of the ruling party.

There are a total of 76 names on the list which has been reproduced below:

APC Must Approach 2023 General Election with a united Front

I am delighted with your esteemed presence at this epoch-making occasion in the life of our party, the All Progressives Congress (APC), as we assemble here for the National Convention, climaxing the transition process which started with the conduct of ward, local, and state congresses. Today, we are going for the zonal and national offices as well as, the ratification of the amended constitution of Africa’s largest political party, the APC.

As you are aware, the Caretaker Extraordinary Convention Planning Committee which l am opportune to chair, is a child of circumstance constituted by the National Executive Committee (NEC), to restructure and reposition the party.

To the glory of God, and with your generous support, we collectively rescued the party and enriched its fortunes. l want to seize this unique opportunity to specially and gratefully appreciate our able and great leader,  His Excellency, President Muhammadu Buhari, GCFR, for his uncommon commitment and leadership style that has guided the committee to record some modest achievements for the party.

I would also like to appreciate the Vice President Prof. Yemi Osibanjo (GCON), the NEC, and members of the Progressives Governors Forum for their untiring support and cooperation to ensure that the Caretaker Extraordinary Convention Planning Committee succeeds in resuscitating the party.

Similarly, the Committee enjoyed generous and tremendous support from the National Assembly APC caucus, other critical stakeholders, committed party men, and women who believed in our mission and ability to deliver the mandate and move the party forward.

Your Excellencies, distinguished personalities, ladies and gentlemen, permit me to quickly reflect on some of the modest achievements recorded by the party under the Caretaker Extraordinary Convention Planning Committee whose tenure is ending today, for us to appreciate how far we have gone in revamping and improving our beloved party.

Upon assumption of office, the committee embarked on a genuine and all-inclusive reconciliation process to give everyone a true sense of belonging, confidence, and reassurance in the collective ownership of the party. We, first of all, visited some critical stakeholders to engage them in resolving the disputes and other hanging disagreements in the party. While some of these visits were made public, others were done out of the public glare and without media publicity. Similarly, we visited some aggrieved chieftains who sincerely shared their ill feelings with the committee. We spoke to each other frankly, placing party interests above personal interests.

I am glad to state that those frank discussions built a new hope in the hearts of the aggrieved persons such that, those who earlier left the party returned back, while those contemplating to forsake the party, never left.

However, when we commenced the assignment, we realized that the problems on the ground had far outweighed our estimation of the time required to resolve the huge problems bedeviling the party. This made the initial Six months dateline grossly inadequate, unrealistic, and not practicable and therefore, the need for extension of more time. Happily, for every extension, we brought in additional values with positive developments into the party.

Having reconciled substantial stakeholders, members and groups, the committee commenced membership registration and revalidation exercise, being one of the mandates of the CECPC, to establish the party’s numerical strength for proper planning and mobilization. The exercise provided our new members the opportunity to register as legitimate members of APC with equal rights, privileges, and opportunities, as well as, to give back the ownership of the party to the members, using the bottom-top approach. I am glad to state with all sense of fulfillment that the membership registration and revalidation exercise, recorded over 41 million members who registered with the details of their Permanent Voter Cards (PVC) and passport size photographs. This unprecedented increase in membership from the previous 11 million registered members to over 41 million registered members, provides the party with an added advantage of winning elections in Nigeria with landslide victories.

Mr. President, distinguished members, ladies and gentlemen, APC under the Caretaker Committee, made history with an unparalleled record of high-powered defections into the party. Three serving governors of Ebonyi State, His Excellency Engr. Dave Umahi, Cross River State, His Excellency Dr. Ben Ayade, and Zamfara State, Alhaji Bello Mutawalle, defected along with Millions of their supporters from PDP into the APC.

I am glad to add that the fortunes of the party were further enriched with the defection of former Speakers of the House of Representatives, former PDP national chairman, member PDP Board of Trustees, several Distinguished Senators and Honourable members of the House of Representatives and state assemblies, and several other heavyweights cutting across all the geo-political zones of the country.

Let me reassure those of you whose defections are being challenged in the courts that you have nothing to fear because your defections did not contravene any law. You will by the grace of God emerge successful and victorious in the superior courts at the end of these litigations. Your wise decision to join APC along with Millions of your supporters shall never be in vain.

I am gratified to inform this gathering that the Caretaker Committee under my watch has finally and fully settled the balance of payment for the National Headquarters. We have taken full ownership of the property. It is named after His Excellency, President Muhammadu Buhari GCFR. The National Secretariat will henceforth be known and addressed as ‘BUHARI HOUSE’.

I am pleased to say that the CECPC conducted peaceful and successful Congresses at the ward, local, and state levels and reviewed the party’s constitution to clear ambiguities and to provide for the missing lines. The reviewed constitution is ready to be presented to you for ratification.

To promote party governance, teamwork, and inclusiveness, the caretaker committee introduced wide-scale consultations and engaged many stakeholders outside the committee as chairmen and members of various sub-committees on reconciliation, membership registration, Congresses, and Appeal committees among others

In addition, the Caretaker Committee in conjunction with the Presidency, introduced a tripartite consultation forum between the party, the National Assembly APC caucus, and the executive arm of government to build a conducive and healthy working relationship for speedy execution of government policies and programs for the benefit of Nigerians. I am glad to say that, this initiative with support from the leadership and members of the National Assembly and the Executive, has positively redirected the relationship between the three organs from that of mutual suspicion to that of trust, understanding, and teamwork.

As a matter of deliberate policy, the party organized a National Youth summit attracting youth from all the political wards across the country to mobilize the youth and to give them a sense of belonging and to enhance their commitment to the party.  Similarly, women party faithful from across the country were assembled in Abuja and sensitized on active participation and generating support for the party. The party also took deliberate measures to give special recognition to People Living with Disabilities and now represented in every function of the party.This is in recognition of the great roles they play in the mobilization of the electorate, and participation in election processes.

Your Excellencies, distinguished guests, ladies and gentlemen, it is pertinent to point out that we are conscious of the anxiety among our members for the conduct of the Convention to elect substantive national leaders. We are also aware of the rising interests among individuals and groups especially those with the ambition to aspire in the 2023 general election.

This anxiety has however translated into some internal wrangling and squabbles recently recorded in the party. Such internal disputes are both normal and common, especially in a growing democracy like ours. The beauty of such disagreements is the ability and resilience to resolve them and emerge out of them stronger.

Once again, l wish to commend Mr. President for the excellent leadership exhibited in resolving the seeming contention with ease, and without adverse effects on the party and the Convention.

As we elect the new national officials, l call on every member of the party to please support and cooperate with the leaders from ward to the national levels. We should please bury our differences and collectively work for the interest and success of our party. This is very necessary for us to approach the 2023 General election with a united front. We can only achieve much in unity, just like the broom which is our party symbol. Our support to the new leadership would no doubt promote internal democracy and the emergence of popular, credible, and generally acceptable candidates to fly the party’s flag in the 2023 election for the party to succeed.

Let me once again express my profound gratitude and appreciation to His Excellency President Muhammadu Buhari GCFR, His Excellency the Vice President Prof. Yemi Osibanjo (GCON), His Excellency President of the Senate, Ahmad Ibrahim Lawan, the Honourable Speaker House of Representatives Femi Gbajiabiamila, the founding fathers of the party, former National Chairmen, their Excellencies Chief Bisi Akande, John Oyegun and Comrade Adams Oshiomhole, their Excellencies members of the Progressives Governors Forum and the Distinguished Members of the National Assembly for the amazing support that l personally enjoyed from you all.

The teamwork, cooperation, and unity exhibited by my colleagues, members of the Caretaker Extraordinary Convention Planning Committee in the course of this assignment, have been exceptionally marvelous. This has truly made us extraordinary. We are indeed a family. I sincerely appreciate you all.

Let me also register our profound gratitude to all other stakeholders, our distinguished delegates, staff of the National Secretariat, the Youth, Women groups, and our supporters nationwide for the fantastic support you have extended to the Caretaker Extraordinary Convention Planning Committee.

I am now more confident than ever, that with a population of over 41 million registered members and still counting, APC has the potential and capacity to remain Nigeria’s ruling party and indeed, Africa’s largest political party.

I welcome you all.