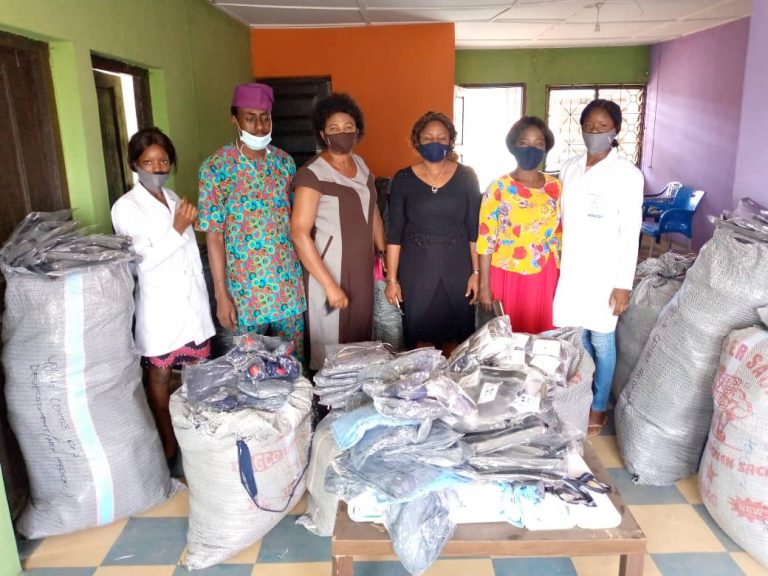 The donation, according to the Executive Director of the organisation, Alo Martins, was necessitated to support the government and health workers in the fight against the ravaging coronavirus.

He further revealed that his organisation was in partnership with an Ibadan based luxury and handbag manufacturing company, My World of Bags, supported by MasterCard Foundation, on a project called “SafeUp”.

While delivering the items to officials of Local Action Committee on Aids (LACA) from the various LGAs in the state, Mr Martins called on organisations and individuals to support government in the fight against the novel virus, saying government cannot do it all alone.

“The SafeUp project is all about our understanding of what came upon the world – Covid-19. Health workers are facing a lot of challenges combating this virus and we believe we should support the government of Ondo State in times of given the PPEs to the state health workers.

“We know that is not something the government alone can do due to the negative impacts of the pandemic on global, national and state economy

“As an organization based here in Ondo state, we collarborated with our partner in ibadan, that is My World of Bags, to see how we can support our people in Ondo State and we can support majorly the government so that the health official will be able to face any challenges by giving them the PPEs”, he explained.

Mr Martins also implored government to be transparent and accountable in it’s dealings, saying these were the only ways the citizens could trust and support government in its various initiatives.

“What I really know about it is that government has challenges it is facing and then citizen have their challenges but what we can do now is that when there is sincerity from the government and then when you are close to government too, we know some of the things that are happening.

“Government should be proactive and do more with what they are doing and then in times of information, people need information so that when the government is given the right information, it will be difficult for opposition or who so ever outside there to be using wrong information to change the minds of people against government”, he said

Reacting, the LACA officials from Akure South and North LGAs, Mrs Cecilia Faleye and Mrs Olapade Alo and from Ifedore LGA, Mrs Adewole Olabisi commended the donors and joined in advocating for citizens support for government, especially in the health sector.

According to Mrs Faleye said, “If we have been having people supporting us like this, this thing would have be a thing of the past or even to suppress it. We really thank the hands that produce this ,the NGO that produce this God will continue to help them. it is a good thing we really appreciate them”