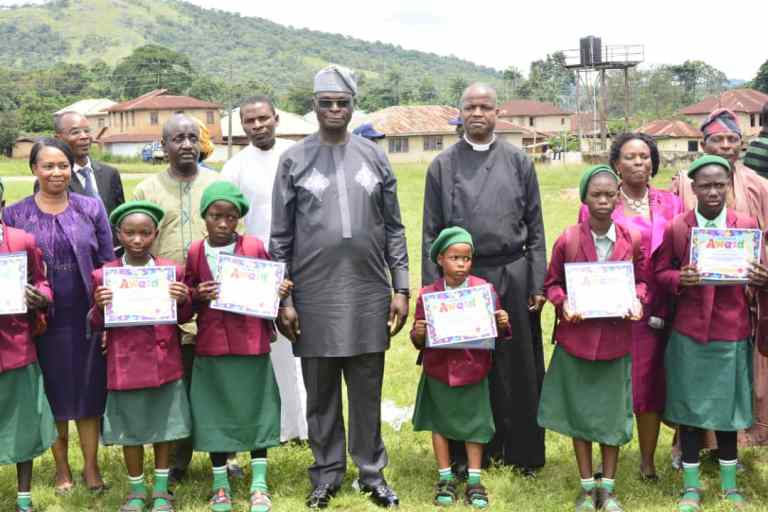 In a bid to empower the future generation so as to live a decent, productive life and be self reliant compare to the present generation, Deaconess Beatrice Oyinwande Educational JP Foundation of Idogun community has presented Bursary and Scholarship awards to 46 female outstanding students of Idogun High School, instituted in honour of the late wife of a former Secretary to the State Government and ex-Head of Service, Attorney Omolorun Modupe, in Ose Local Government of Ondo State.

The event held at St Paul’s Anglican Primary School, Idogun, was attended by parents of the beneficiaries, school managers, educationists, top bureaucrats in the state and several others.

The Chairman of the event and Chief of Staff to Ondo State Governor, Chief Olugbenga Ale described education as a veritable instrument that unlocks the innate imagination and intellectual capacity in every individual, through which we contribute to the overall development of our society or State.

According to him, he said the significant of education to a Girl-Child cannot be over-emphaisied; a fundamental mean through which our children and young ones could improve their personal endowments and to build up capacities towards creating enormous opportunities for their overall well-being.

Chief Ale established that for any society, State or nation to develop beyond its socio-political economic limitations, sound education is key to all its citizens to unlock opportunities inherent within his/her environment.

The Chief of Staff to Ondo State Governor congratulated and appreciated our revered Elder, Chief Omolorun Modupe whom he said he had utmost respect for overtime, and hold him in high esteem on the establishment of this Educational Foundation.

Saying it is a good legacy for the memorial for his late wife, Late Deaconess Beatrice Oyinwande Modupe and to train minds, characters and abilities of our Girl-Child in Ondo State.

Ale warned that time has come for us all to do away with the notion that woman’s place is in her husband’s kitchen, however they should occupy their place of pride at the top echelon of political and public offices were decisions are made.

He therefore obligated all and sundry in their various capacities to contribute greater effort towards removing all seemingly primodial barriers and archaic philosophy that could hinders our women to reach their peak in life.

The Chief of Staff to Mr. Governor highlighted various gaint strides of this present administration of Arakunrin Oluwarotimi Odunayo Akeredolu SAN, the Governor of Ondo State has accomplished in education sector geared to towards growth and development of the good people of our Sunshine State, despite the economic meltdown across the globe which has affected Nigeria economic fortunes negatively.

Gbenga Ale disclosed busary and scholarship awards has been given to deserving indigent students of the State within the available financial resources of government.

According to him he reported that the present administration in the State has committed huge financial outlay to the upliftment of the education standard, through recruiting 1,200 primary school teachers and several primary school renovated across 18 Local Governments of Ondo State.

The Chairman of the event, encouraged all others well-to-do in the State and other similar Foundations to embrace this Noble cause of Deaconess Beatrice OYINWANDE Modupe Educational Foundation for Girl-Child. And to contribute their own quota towards the growth and development of education in our dear State.

Earlier, the initaitor of the Foundation Chief Omolorun Modupe ably represented by Mr. Bayosile Oloruntoba a Director of Agric Extension Service at the Ondo State Ministry of Agriculture and Rural Development chroniclled the emergence of the Educational Foundation as a product of his firm belief in English Maxim which acknowledges that ” Knowledge is Power”.

According to him, he said if we the present generation defaulted or refused to educate our young ones today. It shows that we have failed as worthy and good parents and we have committed an unforgivable crime to humanity which is higher that moral offense.

He said the thrust of the Foundation is to empower our future generations, especially our Girl-Child so as to be able to live a decent and more productive life after us. More so, it would inturn bequeaths an enviable legacies of achievements for the next generations after the present one of ours.

As it is known in Nigeria today, many people cannot achieve their life desires, apart from playing politics, and this is as result of poor educational background that is affecting every individual seeking to achieve any form of success in life.

The initiator of the education Foundation appreciated all Amazons present, saying “I am sure and the awardees of today are being practically influenced by the today’s environment and as young up-coming innocent souks, they can personally hear and demonstrably see older women and ladies who are already acomplishers in highly respectable positions in different fields of life”.