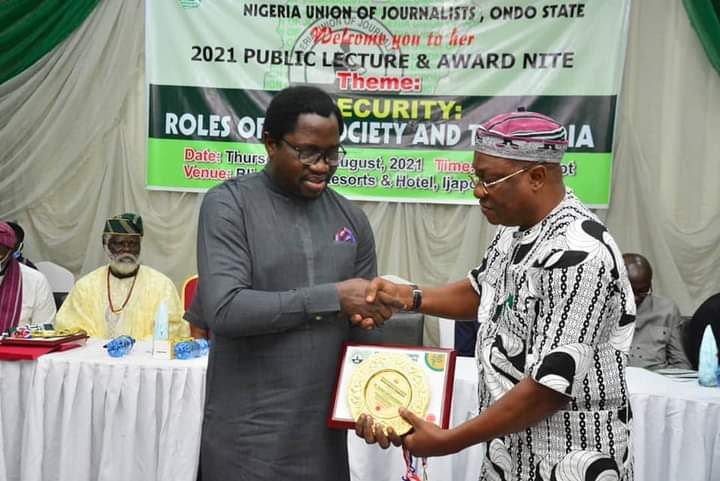 The Chief Executive officer (CEO) of SCKYÈ HOSPITALS LTD, Akure, and former Presidential Hopeful, Dr Thomas-Wilson Ikubese, has again been honoured with award of Distinguished Personality In Humanitarian Services conferred on him by the Correspondents’ Chapel of the Nigeria Union of Journalists (NUJ) in Ondo State.

At the colourful ceremony held at Ijapo in Akure and attended by top people in the society including Governor Oluwarotimi Akeredolu represented by his Deputy, Hon Lucky Aiyedatiwa, the Director General, Sunshine Stars FC and former Chairman, Ondo State Football Agency, Otunba Akin Akinbobola presented the award to Dr. Thomas-wilson Ikubese to the delight of guests at the event who applauded the honour as well-deserved considering the unprecedented humanitarian and philanthropic gestures of the Senior Medical Practitioner to the less privileged in Ondo state in particular and the country in general.

This submission was confirmed thus, “We are caught by the rare humanitarian gesture daily displayed by Dr. Thomas,” the Chairman of the Correspondents Chapel of NUJ, Mr Tope Fayehun said, while thanking Ikubese for making himself available for humanity service.

Only on Thursday, 5th August, 2021, Dr Ikubese also received an “Icon of Hope, Embodiment of Truth And Inspiration To Nigerian Youth” Award from the Heritage Ambassadors Network(HAN).

In his response, the Philanthropist and Convener of the #YesWeFit Revolutionary Movement, appreciated the honour done him.

Dr Ikubese said, “I thank this body of distinguished journalists for this honour and dedicate the award to my patients and the less privileged in society for whom I’ve dedicated the rest of my life.”

The occasion, which had several other dignitaries was also witnessed by the former Provost of Adeyemi College of Education, Ondo, Prof Olukoya Ogen who was the Chairman of the occasion and Hon. (Dr.) Joseph Akinlaja who is a former two term National Assembly Member and guest speaker at the Public Lecture & Award Nite