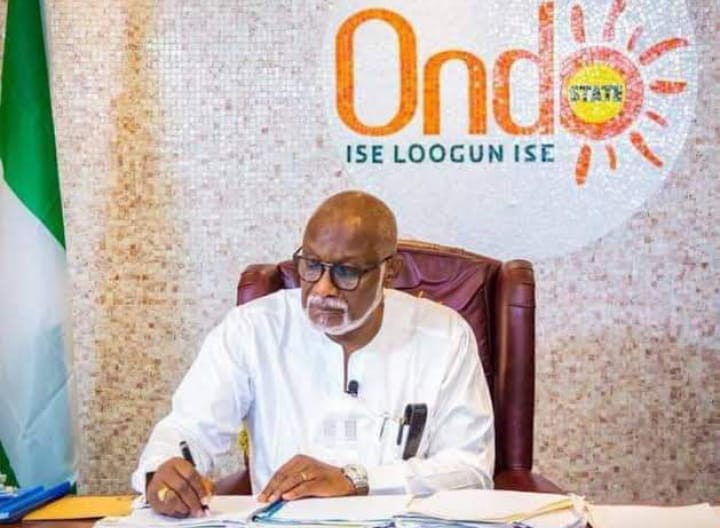 …. Congratulates Gov on award as ‘Governor of the year on Security’

Edema who emphasised that with the bureau which oversees and publishes statistics for Nigeria coming out with the verified data on Ondo State, said it is an attestation that Akeredolu is doing everything right as governor.

The Statistician General/CEO, NBS, Mr Adeyemi Adeniran, had on Friday while featuring on Sunrise Daily, a breakfast programme on Channels Television, while commenting on the report of the NBS multidimensional Poverty Index which was unveiled by Prof. Ibrahim Gambari, the Chief of Staff to the President on behalf of President Muhammadu Buhari on Thursday, disclosed that Ondo State has the least poverty rate, pegged at 27 percent, while Sokoto ranked highest at 91 percent.

The NBS chief, revealed that in the assessment of the states in the Multidimensional Poverty Index, the issue of education, access to health facility, food security were used during the collation of the data.

While commending Akeredolu on his efforts at uplifting the economy of the state in all sectors, Edema, stressed that the midastouch of the governor has been glaring enough for all to see.

“For those that has been saying that Arakunrin Odunayo Akeredolu has not being doing anything in the area of the economy, the record is now there for them to see. This is no doubt an incontrovertible fact by the NBS.

“With this, I am congratulating Arakunrin Odunayo Akeredolu on this spetacular feat. The passion with which the governor has been thriving for the development of the state within and outside the country is an indication of his commitment towards placing the state at the zenith.

“He has touched all the sectors, from infrastructural development across the states, to education, as well as agriculture. He has just been wonderful.”

The ex-OSOPADEC boss also congratulated the governor on his recognition as Governor of the Year on Security in Nigeria by New Telegraph Newspaper.

According to Edema, Akeredolu is certainly a trailblazer, particularly with his idea in the formation of the Amotekun Corps, which he said had brought succour to not only the people of Ondo State but the entire Southwest.

Edema, maintained that Akeredolu has continued to demostrate that the people must always come first for anyone in governance.