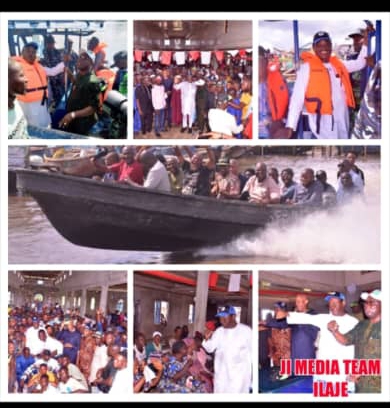 Billionaire business mogul and candidate of All Progressives Congress (APC) for Ondo South in the 2023 general elections, Dr. Jimoh Ibrahim has commended Independent National Electoral Commission(INEC) for conducting elections in the riverine communities in Ondo State despite the terrain.

He gave the commendation on Thursday while on familiarization tour of ward to ward at Igbobini, Apoi in Ese-Odo Local Government Area of the state.

Ibrahim noted that considering the terrain of the riverine communities in Ondo South senatorial district, the INEC officials who travel on the sea to perform their duties in the communities were really patriotic.

He noted that INEC could have raised different excuses to avoid going to most of the island communities in the district during election period.

According to him, “Today, I must commend INEC officials for coming to the communities in Ese-Odo Local Government to conduct electoral exercise.

” It’s not easy to travel on water for two hours in the name of performing official duties as electoral officers during the election period.

“I marvelled at the rate of waves and the way speed boats manoeuvre on the sea while sailing and the level at which the are prone to common mishap in the terrain.

“It is worthy of commendation and definitely all officers sent to our riverine communities by INEC are truly patriotic.

” We must all join hands to support INEC before, during and after the election to make the exercise worthwhile.”

The people of Arogbo wards 1, 2, 3 and Ukprama wards 1 and 2 came out en mass to welcome Dr. Jimoh Ibrahim CFR and their illustrious son, Hon Donald Ojogo in a grandstyle with overwhelming crowd in company of Arogbo Ibe songs.

The Red and Green Chambers candidates aroused jubilations from the creeks to the riverside and upland.