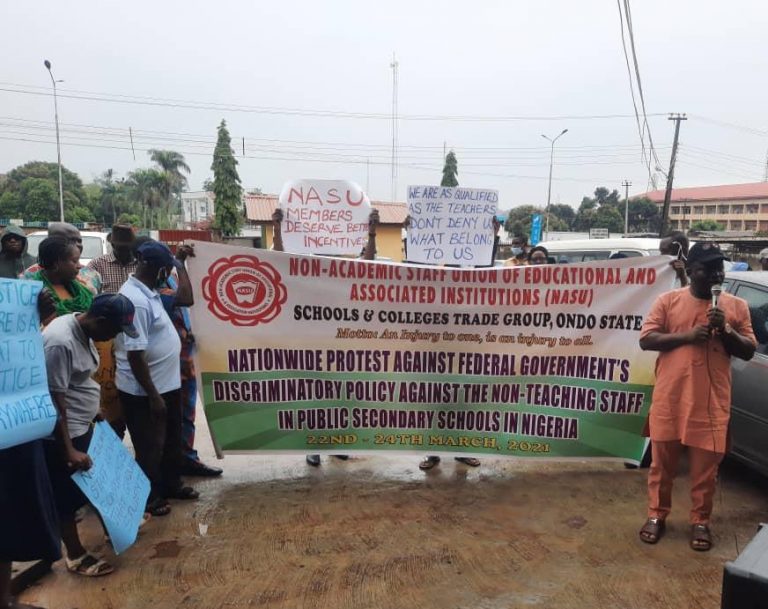 Members of the Non-Academic Staff Union (NASU) in Ondo state from basic and secondary schools today staged a peaceful protest to seek their inclusion in the extension of the retirement age at teachers from 60 to 65 years and the years of service from current 35 to 40 years.

The NASU members who were armed placards with different inscriptions, are from Public Basic and Secondary Schools across the 18 local government areas of the state defied early morning rain and converged on the headquarters of Ondo state Teaching Service Commission (TESCOM), the Governor’s office and the State Assembly complex at Alagbaka Akure to seek the state government’s support for their agitation.

Adeleye-Oluwole noted that extending retirement age of Non-Teaching staff like teachers would bring high productivity and efficiency into the secondary school education, urging President Muhammadu Buhari and the National Assembly to grant the NASU demands for its members.

Also speaking, the Ondo state Chairman of NASU, Comrade Adebayo Obayoriade and the State Secretary of the Union, Alhaji Adewale Sanusi, said their members are well qualified to be included in the extension of Retirement age and benefitting from a Special Salary Scale and enhanced allowances.

Speaking on behalf of Government, the Head of Service, Pastor Adeniran Adeyemo said the NASU demands would be submitted to the appropriate quarters for necessary actions at the federal and state levels.

On 5th October, 2020, His Excellency, the President of the Federal Republic of Nigeria, Muhammadu Buhari, GCFR, through the Honourable Minister of Education, Malam Adamu Adamu at the 2020 World Teachers’ Day Celebration held at the Eagle Square, Abuja announced incentives for Teachers in Public Basic and Secondary Schools in Nigeria which include extension of the retirement age at Teachers to 65 years and the years of service to 40 years from the current 35 years as well as Special Salary Scale and enhanced allowances.

The Federal Executive Council at its meeting on Wednesday 20th January 2021 gave approval to the incentives, while the Honourable Mtnister of Education announced at a Press Conference that a Bill titled: Harmonised Retirement Age for Teachers in Nigeria Bill (2021) would soon be transmitted to the National Assembly in order to be enacted into law.

Unfortunately the Non-Teaching staff in the Schools system were excluded from this gesture of Government. While we, members of the Non-Academic Staff Union of Educational and Associated lnstitutions (NASU) in the Schools and Colleges in Nigeria applaud this good gesture of Government, we wish to remind the Govemment that Teachers are not the only workers in Schools Teachers work with diverse range at Non-Teachnng Professionals and support personnel in order to achieve the set goals.

The Federal and State Governments should put an end to all discriminatory industrial relations practices against the Non-Teaching staff in the Primary and Post Primary Schools system.

The Federal Government should include the Non-Teaching staff in the approved Special Teacher Pension Scheme to guarantee better welfare ior them in retirement and also extend their retirement age to 65 years and length of service to 40 years.

The Federal and State Governments should as a matter of deliberate policy do everything possible to motivate all workers in the education sector irrespective of their profession and job description.

The Government should put in place training programmes for Non-Teaching professional staff with a view to enhancing their productivity.

The Federal Government should make provision for loan facilities. such as agriculture, housing, cars, motorcycles, etc. to support Non-Teaching staff earnings to enhance their welfare.