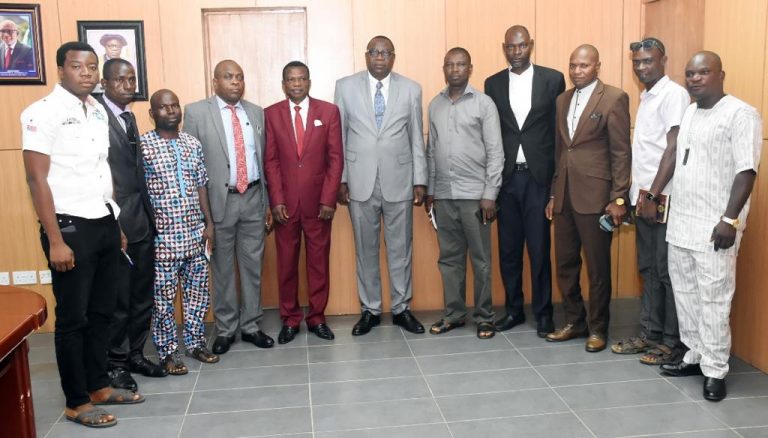 Implications of Akungba Youths’ Visit to me —AAUA VC

Youths of the host community of Adekunle Ajasin University, Akungba Akoko, have pledged to cooperate and support the newly-appointed Vice Chancellor of the Institution, Prof. Olugbenga Ige, to ensure his success in office.

They also told the Vice Chancellor to regard Akungba as a second home where he is welcomed and assured of safety at all times.

The youth, under the aegis of Akungba Youth Forum (AYF), made these declarations on Tuesday, July 13, 2021, during a Congratulatory Visit to the Vice Chancellor in his office.

While welcoming the AYF executives, Prof. Ige said it was heartwarming that youths from the University’s primary host community were among the first to visit him.

In his words, “I sincerely want to appreciate your coming. You are among the first callers to congratulate me since I assumed office. To me, this shows that Akungba people desire the progress of this University. It also shows that Akungba is a land that yearns for development and progress, and the people are lovers of peace.

Responding to some of the issues raised by the youth, Prof. Ige said, I want to assure you that this administration would do everything within its power to maintain the peace between the University and its host community. I promise you that people from our host community would not be left out in the scheme of things.”

The Vice Chancellor also promised to revamp the Town-Gown relationship towards making the impact of the Institution felt more by people of its host community.

Speaking earlier, the President of the Forum, Mr. Timothy Rotoye, had said that the visit, which was unannounced, was not only meant to congratulate the new Vice Chancellor but also to test his disposition to the youth and people of the town who had clamoured for the appointment of an indigene as Vice Chancellor.

He said they were pleasantly surprised that Prof. Ige warmly welcomed them despite the impromptu nature of the visit. He added that the gesture testified to the excellent human relations and the good heart of the Vice Chancellor.

He said, “We have come to felicitate with you and the entire University on your appointment. Truly, we supported our son who also vied for this post, but since it has pleased the Almighty to grant you this grace at this time, we will cooperate with you in order for the University to continue to grow in all ramifications.

“We deliberately came unannounced because we wanted to test whether you will welcome us or not. We can now go back and tell our youths that the VC harbors no ill feelings against our people.

“While we would cooperate with you to have a successful tenure, we will want you to consider our youths and people whenever it is time for admission, employment and other opportunities,” he pleaded.

He also called for a more robust relationship between the University and the host community and that the University should re-energise its Corporate Social Responsibility by embarking on projects that will benefit the town, particularly the students who live among them.

The Vice Chancellor of Adekunle Ajasin University, Akungba Akoko, Prof. Olugbenga Ige, has said that his focus was to build a better and greater Institution that would be nationally and globally relevant and recognized.

He stated this on Monday, July 12, 2021, while receiving the leadership of Akoko Diocese of the Anglican Communion led by the Bishop, Rt. Rev Jacob Olajide Bada, who came to congratulate and pray for his success on his appointment as the 6th substantive Vice Chancellor of the Institution.

Noting that the Anglican Communion was the first group to pay him a congratulatory visit, the Vice Chancellor reiterated his belief that positions and appointments were the prerogative of the Almighty God to bestow on whomever He wishes.

The Vice Chancellor, a Christian of the Anglican fold, said he was honoured to have the Bishop of Akoko Diocese leading the team, adding that it was noteworthy that the Anglican Communion thought it fit to congratulate and pray for him on the tasks ahead of him as the University’s Chief Executive Officer.

He said, “I want to say that I am the happiest man today, not because I am the Vice Chancellor but because the first official visit I will receive after my appointment is from the Church.

“The implication is that God has ordained this assignment before me, my tenure has started with God and prayers and I believe it would end successfully.

Also speaking, the Bishop of the Diocese, Rt. Rev Jacob Olajide Bada, noted that the humble, humane and compassionate traits of the Vice Chancellor have endeared him to many in Akoko land and beyond.

He congratulated the new Vice Chancellor and assured him that the clergy of the Diocese would continually pray for him to have a successful and trouble-free tenure.

“We have come to rejoice with you and the entire University Community. We appreciate Gods glory over you and we are happy that the Almighty God has accomplished what He said He would do.

“We will do everything possible, not only to support you throughout your stay in office, but also be with you in prayers at all times, he assured.
Other clergymen, including the Bishops wife, Esther, Venerablesl Frederick Ayenigbara, Peter Fadare, Peter Oladepo, Abiodun Olusakin, and Isaac Awowole, as well as Rev Emmanuel Ogundele and Samuel Iwasokun accompanied the Bishop.
Principal and senior University officers, including the Registrar, Mr. Gbenga Arajulu; and Bursar, Mr. Tobi Orina, were also present at the event.