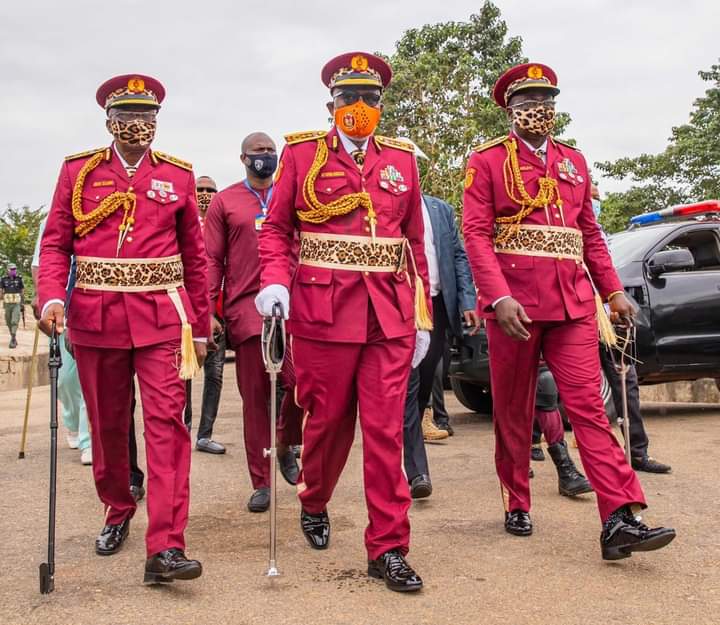 Insecurity: Akeredolu as a Shining Template for way forward

THE CHALLENGES OF INSECURITY IN NIGERIA, AKETI AS A SHINING EXAMPLE ON HOW TO TACKLE INSECURITY…. Dr. Akeredolu O.N

Aketi and Ondo state as a case study, why other governors should emulate him

The primary responsible of any government is to secure the lives and properties of her citizens. The recent happenings in Nigeria have shown the failure of the present security architecture of the nation. From kidnappings, rapings , banditry of the north and to seccesion agitations of the south, the truth now is that Nigeria has security challenges. Our leaders must come to the reality of this and take drastic steps before it gets out of hands.

The killing in Benue state, in which the sitting governor of the state said he survived several assassination attempts and lost his security advisor to the unscrupulous assailants, terrorising the state. After several open pleadings for federal government’s intervention to the senseless killings in the state by Fulani herdsmen, the recent video of Gov. Ortom in which he expressed his frustrations over senseless killings of the citizens of his state.

Also, several senators have been crying their hearts out over the killings in their various states. Some of them on several occasions said it on the floor of red chamber, their inabilities to visit their constituencies due to insecurity. The last one was Senator Smart Adeyemi from Kogi West, who nearly cried on the floor of the house ( red chamber), lamenting the spate of insecurity in Nigeria.

It is the fact that something urgent must be done or we become a failed country like Chad where the terrorists recently killed their president or Somalia. There are some states today you can’t visit without writing your legal will first because travelling to these states is like succide mission.

*NIGERIA FAILED TO YIELD TO WARNINGS OF A SAGE*

Chief Jeremiah Obafemi Awolowo, undoubtedly remains one of the ever lived sages in Nigeria. He was a premier of western Nigeria between 1951 to 1960. He was the federal commissioner for finance and vice chairman of ruling military council of Gen. Gowon led military government.

Chief Lai Muhammed, the present minister of information, also corroborated Chief Awolowo’s early warnings, blaming the high rate of criminalities among the Fulanis to the 1975 coup in which the proposed compulsory primary education to all nigerians of the deposed Gen. Gowon administration was jettisoned by another northerner, late Gen. Muritala who took over from him. The neglect of subtle warnings of Chief Awo, almost 50 years now has turned Nigeria to den of insecurity or state of anarchy.

*AKETI AS A SHINING EXAMPLE FOR OTHER GOVERNORS*

It is not yet uhuru about the security situations in Ondo state but Akeredolu led government has tried in all ramifications. The Fulani herdsmen wanted to turn Ondo state to theater of war if not for the drastic actions of Arakunrin, the state today would have been turned to Zamfara , Borno or Southern Kaduna , thanks to the timely intervention of our Mr. governor.

Arakunrin led government ensured the dream of Western Nigeria Security Network ( Amotekun) became a reality. The whole idea of Amotekun is to secure the state and ensure the spate of kidnappings is drastically reduced which has been significantly achieved in Ondo state. There are still some security challenges in the state but you will agree with me that this security organization in the state has tried in taming the miscreants and kidnappers.

Instead of governors like Gov. Ortom and co. to continue to cry over spilled milk, they should take a cue from Gov. Akeredolu of Ondo state and reciprocate this gesture in their various states.

Nigeria security challenges have become so embarrassing to the extent that we are now a laughingstock among the committee of nations. There is a fact that these governors and leaders should know, there is a time bomb of insecurity in Nigeria, there is a need for them to come to Ondo state and learn modus operandi of Amotekun security outfit and replicate it in their various states.

This achievement of Aketi in area of security has further lent credence to the agitations for restruturing of Nigeria, this will help the state governments to secure their people better.