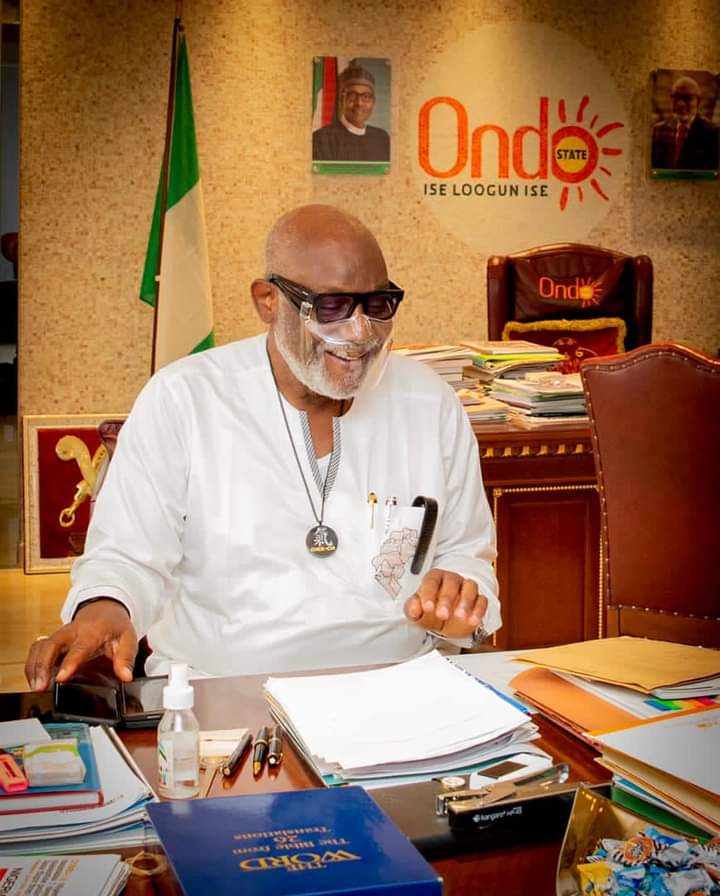 My dear good people of Ondo State, it is with every sense of responsibility that I address you this evening on the prevailing security challenges being experienced in our State, we cannot shy away from the fact that we have had a fair share of unpleasant instances of breach of peace.

No doubt, these are trying times in our national life and even at the level of our dear State, Ondo. The different shades of insecurity have not only taken an appreciable toll on governance; our focuses as a people for our individual endeavours have been brazenly compromised and distastefully distracted.

It is obvious that our Armed Forces and other security agencies, in spite of their patriotism and displayed zeal, appear to be overstretched if not overwhelmed by these enormous security challenges.

Understandably too, our dear State like others, is encumbered for obvious reasons, in its avowed efforts to stem this ugly tide.

My dear people, we want to assure you that our administration will not shy away from its responsibility of providing adequate security for all peaceful residents in Ondo State irrespective of tribe or religion.
In recent weeks, our State has witnessed relative peace.

However, we have noticed some serious matters that we need to address before they degenerate into an unmanageable proportion. These include but not limited to the following areas:
i. Influx of strange faces into our State;

iii. Irresponsible use of the social media;

It will be recalled that about 42 persons whose suspicious presence had caused a security scare around the Army Barracks, Okitipupa some days ago, obviously created some level of curiosity and anxiety. These persons who were allegedly transported from the North for a non-existent security training have since been profiled by Amotekun Corps before repatriation to their respective States.

I have instructed our security agencies to confront with renewed vigour, all criminal elements in our State. Any individual found carrying illegal weapons should be arrested and prosecuted.

Any herder who is not properly registered in our forest reserves should vacate the place, I reiterate.

One emerging security concern that our State is facing is the unfortunate activities of cultists. The State Government has observed lately, the upsurge in their violent activities in the State. Our administration frowns on this development. A situation where our State has been turned to battleground for rival cult groups shall no longer be tolerated. Let me sound a note of warning to all cult groups and their sponsors that we will not spare any efforts in dealing with anyone caught engaging in dastardly acts.

Towards this end, I have instructed our security agencies to clampdown on all cultists in Ondo State and deal decisively with any persons found engaging in cult-related activities and ensure that they are arrested and prosecuted in line with extant laws. The flash points of these cult activities are Ikare-Akoko, Owo, Okitipupa and Igbokoda. We have noted with deep concern that their activities are more prevalent in Owo than any other towns in Ondo State.

This is unacceptable. I assure them all that they shall have the security agencies and the will of the State to contend with.

The third major concern that we need to address is the abuse of the social media to propagate false and fake news.

This unfortunate phenomenon is capable of stoking the embers of disunity and serious security breaches. The social media is almost becoming an unavoidable part of our society as its advent has democratised, deregulated and liberalised the means of news production and dissemination. Unfortunately however, it has also become a breeding ground for spreading fake news.

Before we must accept to post or report any news item or information on the social media, we must evaluate the process and discern the motives behind it and learn to distinguish between false content and real information.

False information can come in form of disinformation or misinformation. Our people should be careful of what they post on social media most especially matters that have to do with security.

Accordingly, any security matter henceforth should be referred to the relevant security agencies rather than posting unsubstantiated claims. The recent issue which dominated the social media and the media space of some Fulani men being trained at the Army Barracks, Okitipupa has been investigated by the security agencies and found to be false.

We can confirm to our good people that there are no 3,000 Fulani men resident in Army Barracks in Okitipupa.

It is, therefore, preposterous for anyone to pressume that the
information was true.
I wish to report to you that Amotekun Corps has also evacuated 137 persons who recently invaded the Elegbeka Forest Reserve along Owo-Ifon Road.

Those evicted were unable to give any satisfactory explanation as to why they were occupying the forest reserve in spite of the State Government directive. They have since been escorted outside the State to their states of origin.

Our people would recall that it was on the corridors of that same forest that the Olufon of Ifon, the late Oba Isreal Adegoke Adeusi, a first class traditional ruler was brutally murdered by suspected kidnappers, last November.

We are also concerned with various chieftaincy and land tussles in some communities in the State. Chieftaincy tussles are ill-winds that have never blown anyone any good. It is a known fact that bitter tussles are capable of derailing society, stability and development programmes of government.

These tussles, if not carefully managed, could lead to conflagrations, especially when they assume ethnic or political colourations in view of the current tense situation in the country.

The instant case of Ikare-Akoko where the perennial crisis between Olukare and Owa Ale has dominated the length and breadth of the community in the last 72 hours is a cause for concern.

Lives have been lost and properties destroyed over a minor chieftaincy in the community. As a way of stemming further crisis, government has imposed 24-hour curfew on the entire Ikare-Akoko till further notice.

The immediate cause of the current crisis is the contention as to who is the rightful Olokoja. Thus, government has also suspended the chieftaincy till further notice. Nobody should henceforth parade himself as the Olokoja.

The security agencies have been given instruction as to how to treat anybody who flouts this order.

Therefore, in furtherance of the efforts of our administration to address frontally these emergent and aforementioned security matters in our State, the following measures have been put in place:

i. All traditional rulers in the State should henceforth revert
to the government before allowing any group to settle in their domains, any departure from this will be
sanctioned;

ii. All residents should be vigilant and report any untoward
movement in their areas to relevant security agencies;

iii. Any traditional ruler that is found unable to contain the
activities of cultists in his domain shall be sanctioned by
the government according to the law;

iv. The State Government will not hesitate to impose 24-
hour curfew on any community where there are crises
and any culpable traditional rulers shall be sanctioned;

vi. Parents are advised to control their wards on the use of
drugs and other enablers as security agencies have been
mandated to be on guard with a view to apprehending users of such drugs.

Ladies and gentlemen, the issue of security is a collective business which should not be left in the hands of government alone. We must all appropriate, own and personalise it. It is my belief that with God on our side, with the required political will and your support, we will be able to put these security challenges behind us.

Thank you all and God bless.