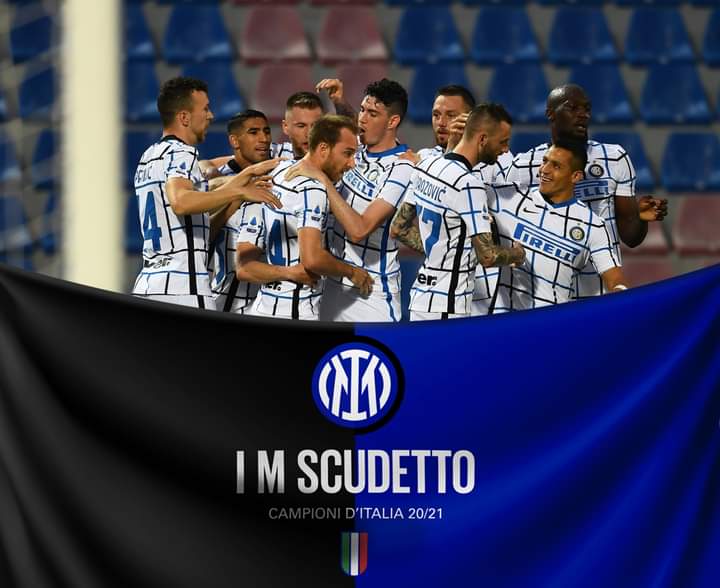 Antonio Conte’s side put one hand on the trophy with a 2-0 win against Crotone on Saturday, but Atalanta’s 1-1 draw at Sassuolo on Sunday ensured the Serie A leaders retained an unassailable 13-point cushion with four matches to spare.

Inter have only twice tasted defeat this season – two 2-1 losses in the Milan derby in October and at Sampdoria in January, the latter followed by an ongoing 18-game unbeaten run which saw them collect 14 wins, 11 of them in a row.

Conte’s side snatched top spot from AC Milan on February 14 and have held it ever since, with a 3-0 triumph over their cross-city rivals in February making them the runaway leaders during the business end of the season.

Juventus were expected to compete for the title yet again but endured a torrid season under Andrea Pirlo, with their spot in next season’s Champions League still hanging in the balance.

Stefano Pioli’s AC Milan looked like the closest contenders and were top of the table at Christmas, but they failed to keep up with their spectacular early-season form and have now also slipped into a top four dog-fight.

The much-coveted Scudetto ends the Nerazzurri’s decade-long trophy drought and represents their first league title since 2010 when Jose Mourinho led a side including Samuel Eto’o, Wesley Sneijder and Patrick Vieira to a Serie A, Coppa Italia and Champions League treble.

Twelve different managers including Claudio Ranieri, Walter Mazzarri and Roberto Mancini took the reigns at San Siro in the following nine years but the club languished in Serie A, finishing as low as ninth, failing to reach a major final and enduring a six-year absence from the Champions League.

The three points, courtesy of Christian Eriksen and Achraf Hakimi goals, already brought an end to Juventus’ nine-year winning cycle which was kick-started by Conte himself in 2012 and continued by Max Allegri and Maurizio Sarri last term