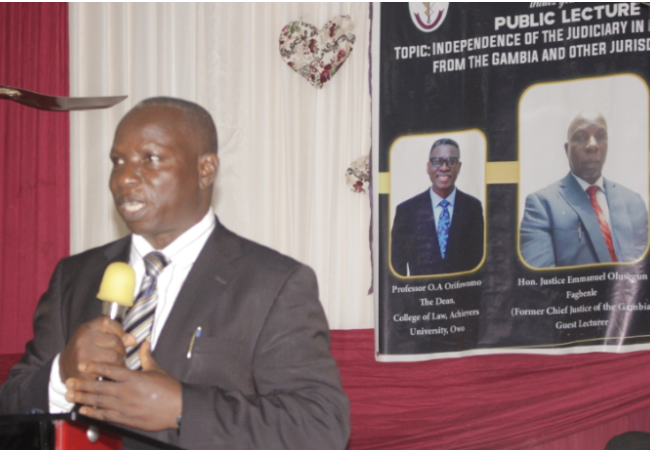 The immediate past Chief Justice of The Gambia, Justice Emmanuel Fagbenle has declared no nation’s democracy can succeed without Independence of the Judiciary.

Justice blamed the wrong removal of the former Chief Justice of Nigeria, Walter Onnoghen on lack of judicial in.

Justice Fagbenle, a Nigerian-born legal icon stated this during the Public Lecture to usher-in the 2021 Law Week by Students of Achievers University Owo (AUO), Ondo State.

Speaking under the topic,  “Independence of the Judiciary in Nigeria: Lessons from The Gambia and Other Jurisdictions”, Justice Fagbenle who spent about two years as CJ in the Gambia, said the removal of Justice Onnoghen should have gone through a process backed by Law.

He said Onnoghen’s removal should have been recommended by the National Judiciary Council (NJC) if he had been found wanting, which would then be ratified by two-third of the National Assembly.

Justice Fagbenle explained that the Nigerian Judicial system to be independent, the power to appoint Chief Judges and members of the NJC shouldn’t rest on an individual like President of the country.

He frowned at the delay of justice in Nigeria, noting that the society would be better for it when there’s Justice for the poor and the rich.

“Violation of the Independence of the Judiciary must not only be seen as a breach of the Constitution where same is enshrined, but also,  as offending ordinary human values of the society wherever such violation take place.

“It would appear that there is no unified meaning assigned to the concept of independence of the judiciary. It tends to be viewed from different perspectives such as judicial, constitutional, political or economic perspectives.

“This absence of common meaning could be the reason why the concept is misunderstood and regularly undermined, even sometimes by those who should be its vanguard,” said Justice Fagbenle

On the Law Week initiative, Justice Fagbenle hailed the decision of the Students of Achievers University, describing it as a milestone in the history of the Institution.

Earlier, the Dean of College of Law, AUO, Prof. Odunola Orifowomo, also a former Justice of the Court of Appeal of The Gambia, said the College is grateful to the Pro-Chancellor of the Institution, Dr Bode Ayorinde, for the support it had enjoyed since it was established.

He enjoined the Students to take the presence of Justice Fagbenle in the University as a rare privilege which should be maximized.

Also, the Vice Chancellor of AUO, Prof. Samuel Aje charged the Students to be wary of their actions as their Profession demands. He said they should be determined to be the best.

The Pro-Chancellor and Founder of Achievers University Owo, Hon. Dr Bode Ayorinde tasked the Students to participate in all the activities during the Law Week.

Dr Ayorinde who also contributed to the topic of the Independence of the Judiciary, said the Constitution is the albatross of the Nigerian State.

He said the quality of the 1999 constitution as amended is inadequate and would continue to be a cog in the wheel of the progress of the country if not amended.

The Law Week continues on Tuesday as Hon. Justice Oluwafeyisayo Kuteyi of the Ondo State High Court will preside at a Court Trial in the University between the Equity Chambers and Liberty Chambers of the College of Law.