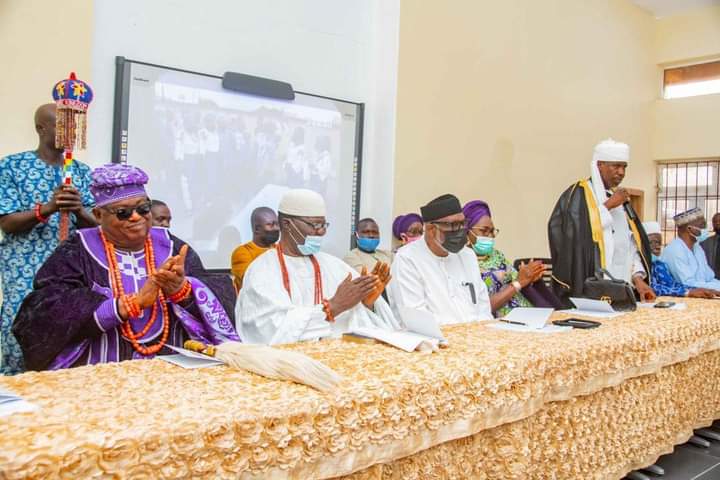 ….. Says ADEGBENRO WAS A GREAT GENERAL WHO DIED WORKING FOR THE STATE

Ondo State Governor, Oluwarotimi Akeredolu, SAN, has described the late Dr Wahab Adegbenro as a lucky man and great general who died fighting against the Covid-19 pandemic in the state.

Governor Akeredolu said the late medical doctor was busy saving lives at the forefront of the battle against the coronavirus pandemic without taking cognizance of his personal well-being.

The Governor spoke at the 1st year remembrance Public Lecture in honour of the memory of the late Former commissioner for Health,held at the Faculty of Law Auditorium, Elizade University, Ilara-Mokin,

The event was put together by the Adegbenro Dynasty.

While pointing out the rewards of good character as exemplified by the late Adegbenro, Governor Akeredolu urged the people to dedicate their lives to serving God and humanity.

The Governor prayed that God will continue to protect and care for the family the deceased left behind, assuring them of the government support.

He said: “Death is a debt that we all will surely pay. That is the reason we must all be of good character. Adegbenro was a lucky man. He was twice commissioner in this state. He held those positions to help the people. He was a philanthropist.”

Narrating the event before the death of the former commissioner, Governor Akeredolu said: “I remember I was in my sitting room where he came to see me. And the way he was talking, I was worried. I immediately called another doctor. I told him to follow the late Adegbenro and take his sample.

“I felt he was not feeling well considering the way he was talking. His sample was taken. The second day, he was rushed to the hospital. He was ill. He was taking care of others, he forgot to take care of himself. He died serving this state.”

The Minister of State for Niger Delta Affairs, Senator Tayo Alasoadura, was also on the entourage of the Governor at the event.