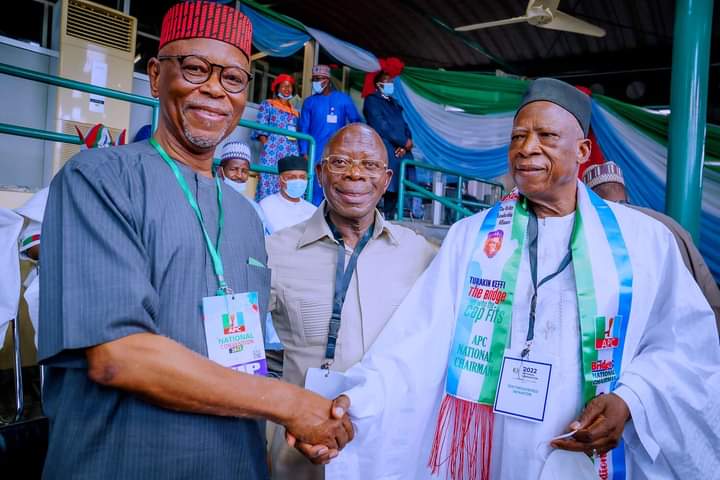 …..Charge them to make APC stronger

A chieftain of the All Progressive Congress (APC) in Ondo State and Convener of Ibi Giga Ambassadors, Chief (Dr) Alex AJIPE has congratulated the new National Chairman of the party Senator Abdullahi Adamu and members of the newly-elected National Working Committee (NWC) of the party.

Ajipe, in a statement issued by his media Aide, Solomon Adewoye in Akure the state capital also congratulates all APC members for a successful national convention.

AJIPE who is also an APC Senatorial Aspirant gor Ondo North, said that the emergence of Adamu as National Chairman and Senator Iyiola Omisore as the National Secretary as well as all other NWC members had proven that the APC was not only the party to beat in 2023 but also a party that could unite Nigeria more.

According to him, the success of “the national convention of the party is a good omen for Nigeria saying he was confident the new party chairman and the members of NWC will lead the party to victory again in the coming general election.

He described the process of the national convention as a victory for democracy and a signal that the party will continue to deliver on its promises to the people.

He also congratulates the former Secretary to the State Government in Ondo State, Dr Isaac Kekemeke saying his emergence as APC Vice Chairman in South West is the best to happen to the Ondo state chapter of the party being a notable political strategist all along over the years.

“This victory is for all APC members and I am delighted to have witnessed it.

“The emergence of Adamu as well as all other NWC members have proven that APC is now the party to beat in 2023 and the party that can unite Nigeria,”

” I must also congratulates our former party chairman in the state, Dr Isaac Kekemeke who was also elected as the party vice chairman in south west, I believe that with your political experience, you are qualified to lead us to victory again come next year general election” Ajipe said

He called on the NWC and members from the Southwest to unite the party and reach out to aggrieved persons for victory in 2023.

Ajipe however said that the APC had by the successful convention, proven itself as an organised political machine.