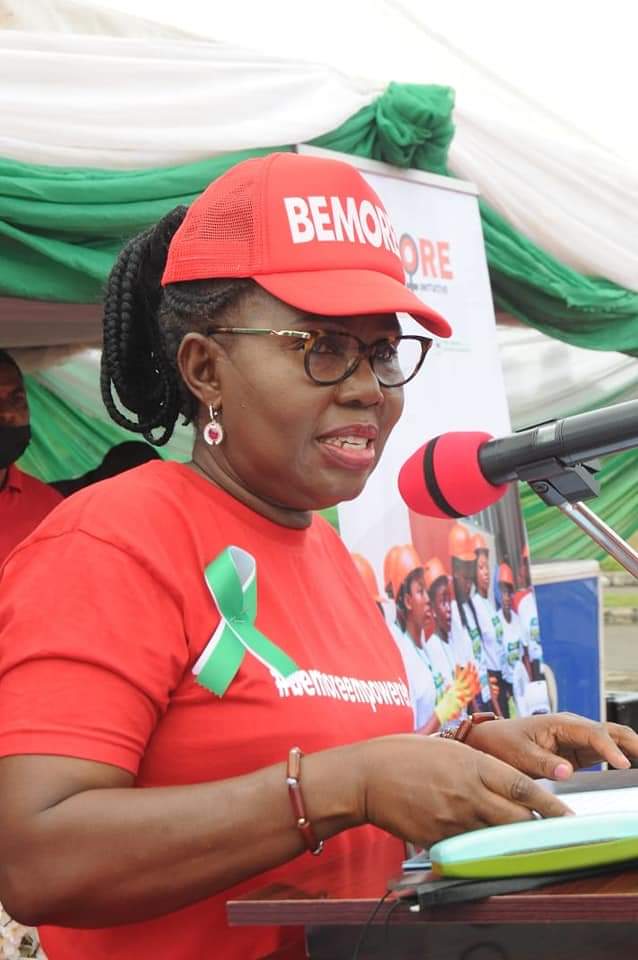 The first lady of Ondo State, Arabinrin Betty Anyanwu-Akeredolu, in a welcome address at the opening ceremony of the 2021 BEMORE Summer Boot Camp held at Ondo State Public Service Training Institute, Ilara-Mokin, has declared that BEMORE has come to stay.

She said thousands of school girls have been benefitting from the BEMORE initiative,explaining that the girls will be taught to become selfless change agents by making SERVICE their watchword and that with these girls, she foresee a future where females lead. She stressed that she has a hunger in her to change the gender narration of our nation.

“Here we are, four years down the line, we are close to training 2000 young secondary girls in ICT, SOLAR Technology and other life enhancing skills. I make bold to say; BEMORE has come to stay! Yes, we are committed to building an army of female technology leaders. Given that their minds have been rewired to have a different orientation, the BEMORE girls will become a generation I had named “A BREED WITHOUT GREED”.

While congratulating the new digital girls and solar girls, the first lady encouraged them to know that everyone of them is special and were born to do exploit.

“Alhough the society might not give you all you want or need, this summer boot camp is giving you the opportunity to be part of a few young girls who will lead and inspire generations of girl children. Do your best to listen and learn all you can during this summer boot camp. Now your future is in your hands. Only you can determine how far you will go in life. The journey to greatness begins now, make every step count”, she said.

“Indeed our ability to hold this years BEMORE Summer Boot Camp was threatened by lack of resources. With the disastrous impact of covid-19 on economies of both developed and developing nations, it became practically impossible to seek support from government institutions.

“This challenged us to think outside the box and come up with innovative ideas of raising funds to support the development of girl children through the BEMORE Empowered Initiative. We have demonstrated that we can successfully raise our funds locally without stress through an innovative approach tagged ‘throw pillow challenge’ which many of you participated in”.

She thanked the BEMORE team for believing in this cause and appreciated their unalloyed commitment to organising a world class boot camp, she equally thank everyone who joined the throw pillow challenge.

“You made 2021 BEMORE Summer Boot Camp possible. The thought of seeing BEMORE “go with the winds” after the tenure of Arakunrin as Governor of Ondo State is concerning because that’s what happens to initiatives or pet projects of First Ladies except very few. I don’t want that to happen to BEMORE”.

In line with the Ondo State first lady’s vision, while speaking at the 4th Edition of Ondo State Summer Tennis Clinic in the Sunshine State, Mrs Akeredolu stated that Tennis is a very good choice for children.

According to her, Dr Jack L Gropple curated research from reknowned scientist to prove the validity of the old adage, “tennis is the sport of a lifetime” and also gave reasons why everyone should play tennis, says it is played anywhere, it is a great work out, it is a health and safe sports specifically for children because a lifetime has to start from somewhere.

“We should not limit the ability and the capacity of these young kids in this game. I can  see future Djokavics, Alexanders, Federers, Serena Williams’ Arsheigh Bartys”.

The BEMORE Welfare Cordinator, Mrs Temitope Daniyan welcomed everyone to the program, adding that the program was initiated by Arabinrin Betty Anyanwu-Akeredolu, where young girls are being trained on Information and communication technology, solar power energy and other energy enhancing skills, the girls are also exposed to Tekwando for self defence against abuse, music, dance, artistic drawings, medical examinations and the program is scheduled to hold for two weeks. The innitiatve started in 2017 and has graduated Over 1,000 young girls.

“We have attained enviable heights as we have beautiful testimonies about our girls bridging the gap”.

While congratulating the first lady for the success recorded, adding that her name is engraved in hold, She assured the parents that their daughters are in safe hands.

The Chairman, House of Representatives on NDDC, Hon Bunmi Tunji-Ojo, who chaired, the opening ceremony, in his address pointed out that BEMORE should be replicated across Ondo State.

Tunji-Ojo said “I see  the future in BEMORE, when you educate a girl child, you educate a nation, BEMORE is a good news, I congratulate the first lady and the BEMORE family. I’ll continue to give my maximum support”, he said.

Speaking on Covid-19, Dr Chucks Abejegha, encouraged everyone to be a champion of covid19 vaccine. His words “We are loosing many people to covid19, urgent steps are need, ensure you get vaccinated and you must continue with the vaccine you started with. Each vaccines have their different mode of preservation and the intervals between the first and second doze are different, the vaccine is safe and effective”.

The Deputy Governor of Ondo State, Hon. Lucky Orimisan Aiyedatiwa while expressing his happiness being a part of the cause said that BEMORE is growing day in, day out, stressing that it is life transforming.

The opening ceremony had in attendance the Ondo state APC Acting Chairman, Engr Ade Adetimehin; Hon. Jimmy Odimayo, Prof. Olugbenga Ige who is the the Vice Chancellor, Adekunle Ajasin University, Akungba Akoko and a Reps member, Hon. Mayowa Akinfolarin and a host of  others.