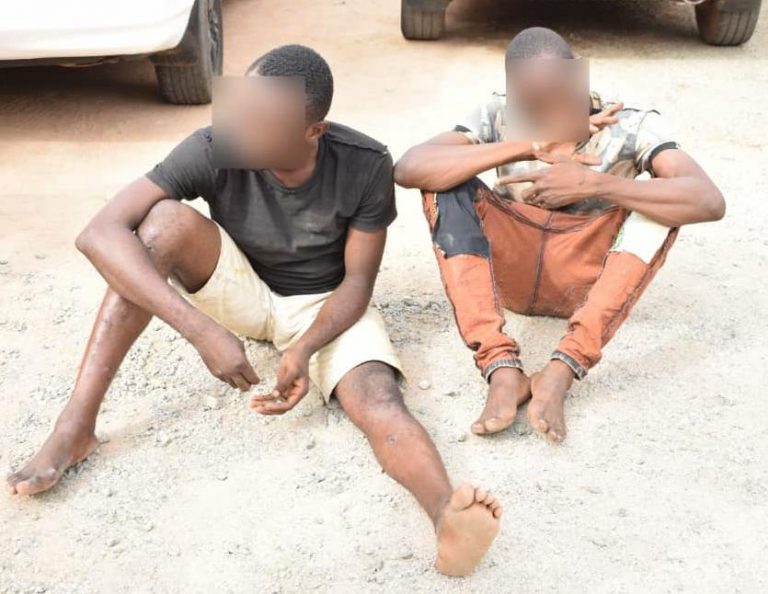 Two suspected fraudsters have met their Waterloo in ondo state for allegedly duping a 70- year old woman in Akure, the Ondo State Capital, of a sum of N500,000.

The two suspects, Dapo Akinwumi and Sunday Famaiye, were accused of hypnotizing their victims and, in the process, swindle them of fortunes until they were apprehended by operatives of the Nigeria Security and Civil Defence Corps, NSCDC.

They were also accused of threatening their victims not to open up about their predicament or else die.

While parading the suspects before journalists in Akure, the state Commandant of NSCDC, Eweka Edenabu Okoro, said the suspects were nabbed by the Counter Terrorist Unit of the command based on sustained Intelligence and credible Information.

He noted that the confessional statement made by the two suspects showed that the syndicate operated across Arakale, Irowo, Odopetu, Ijomu and Isolo area in Akure.

According to him, they operate through a codename ”Apadabo Alaaje”

He however said his men are on the trail of the third member of the syndicate.

Okoro added, “Investigation revealed that the suspects do hypnotize their victims, swindle them of fortunes and threaten their victims not to confess their predicament or else they die.

“On Wednesday 10th March, 2021; Dapo Akinwumi, Sunday Famaiye and Omona Akerele, being the third member of the syndicate currently at large, did intercept the victim at Arakale area, got his ATM Card and mobile phone.

“They later went to a Point of sales (POS) and withdrew the sum of Five Hundred and Seventeen Thousand Naira (#517,000) in an account belonging to an old woman.

“Investigation is still ongoing and all suspects arrested would definitely be prosecuted in the law Court”.

The State Commandant reiterated the command’s committement to eradicating crime in Ondo State.

He advised all criminally minded persons to relocate outside the state or face the full wrath of the law.