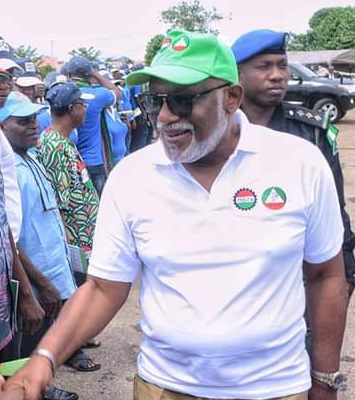 The Nigeria Union of Pensioners, NUP, Ondo State Chapter has denied a media report that it is threatening to drag the state Governor, Arakunrin Oluwarotimi Akeredolu to court over N68billion accumulated gratuities for local government and State Pensioners.

In a Press Statement, the State Secretary of the Union, Comrade Akin Sunday explains that the State Chairman of NUP, Hon Johnson Osunyemi, was quoted out of context in the report.

“To set the record straight, Ondo State NUP never said it will sue Mr Governor (Oluwarotimi Akeredolu), but it is the joint decision of the Southwest NUP that the Union at Zonal level may opt for the option of dragging all the State Governors in the zone to court over unpaid pensions and gratuities.

“Ondo NUP will continue to use dialogue and lobbying to press for the payment of its members’ entitlements.

“We can confirm that Governor Akeredolu has been trying his best since he assumed office in 2017 for our members but it is our hope that the State government will look into our retirees’ monthly pensions which are being paid in instalments and that they were yet to collect that of last October till date. Also, local government pensioners were yet to get that of last November till date.

The Union said: “We have issues with our pension to the extent that pension is not paid as and when due. Irrespective of the fact that the payments are not made as and when due, the issue of percentage payment does not make things to work well for us. We are not being paid fully. Sometimes, state government pay 80 per cent or less.

“On gratuity, we have huge backlog. We are owed N68 billion. Although the state releases N200 million monthly to state and N50 million to local government, yet it is not enough. What normally happens is that a pensioner who is supposed to collect N10 million as gratuity is being paid N500,000 in the State. For local government, the highest pay is about N200,000.

“Despite that gratuity payment is supposed to be a one-off payment, it is being paid instalmentally.

“At present, we have 2011 pensioners who have not collected gratuities at the local government level. The last time they made payment at the state level was in 2013,” NUP said.