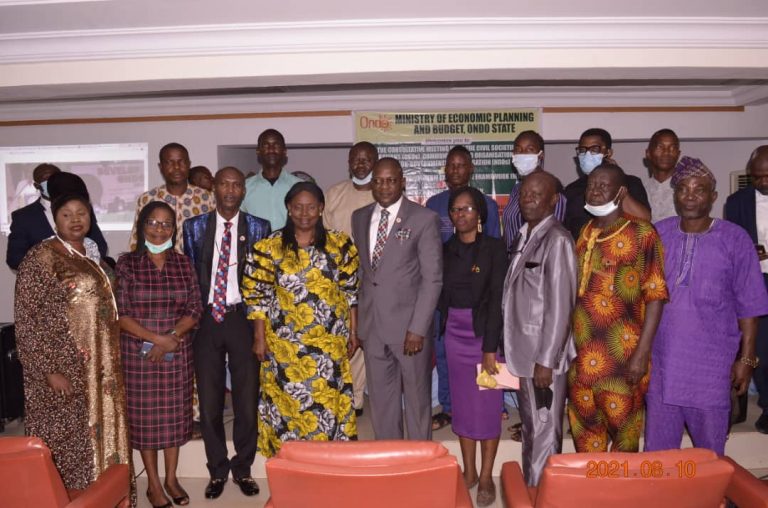 Ondo State has again reassured its commitment to harness her abundant  human and natural resources with a view to transforming  the state to one of the most developed states  in the country through strategic implemention of projects and programs.

The Permanent Secretary, Ministry of Economic Planning and Budget, Chief Bunmi Alade, stated this during the fourth edition of the ministry’s consultative meeting with the representatives of Civil Societies Organizations (CSOs), Non- Govermental Organizations (NGOs) Community Based Organizations (CBOs) Trade Unions, Organised Private Sectors and Professional Bodies in the State  on the  preparation of the 2022 -2024 Medium Term Expenditure Framework  (MTEF) and 2022 budget.

Chief Alade explained that it was in  continuation of the lofty idea of inclusive governance of the Arakunrin Oluwarotimi  Akeredolu SAN, led administration in the State,  that necceciated strategic consultative engagement process with relevant organizations for the preparation state budgets.

According to the Permanent Secretary, the meeting with this group signifies the beginning of series of further discussions with various groups   on the 2022 – 2024 Medium-Term Expenditure Framework  (MTEF) and year 2022 budget of the State.

The Permanent Secretary explained that budget is not just arbitrary figures but a key policy instrument for allocating public resources among competing socio-economic needs, adding that the stakeholders’ engagement on budget preparation is part of the budget reform process to engender inclusiveness and effective participation of people in the Budget processes

He noted that the State budget processes have been undergoing improvement under the present administration in terms of preparation, implementation, monitoring and appraisal, which according to him has consecutively qualified the State in accessing the State Fiscal Transparency Accountability and Sustainability (SFTAS) Program for Result (PfR) grants since 2018.

He added that through the effective collaboration and cooperation of different groups and other stakeholders on budget preparation, Ondo State was ranked the second best position on Budget processes in this year.

Alade noted that most of the issues raised at the last year consultative meeting with different groups and other stakeholders have  been attended to by Mr.  Governor.

The Permanent Secretary stated that the State Governor has signed the Violence Against Persons (Prohibition) (VAPP) bill into law while government also collaborated with NDDC to procure 2 amphibious excavator to enhance proper erosion channelization and control in the State.

According to him, government has signed numerous  agreements with Development Partners such as AFD and AFDB to provide water to Akure and its environs, government has also made  provision for Cocoa, Cashew and palm seedling to farmers as well as employed over one thousand two hundred 1200 primary school teachers across the state.

He, therefore, reiterated the unalloyed commitment of the Arakunrin Oluwarotimi Akeredolu SAN, led administration to always make the well beign of people the central focus of government activities.

Earlier in his opening remarks, the Director of Development Planning in the Ministry, Mr Bamidele Daisi , said the forum was meant to enhance  transparency and accountability in the budget preparation process of the State.

While presenting the 2022-2024 Medium-Term Expenditure Framework (MTEF) and the 2022 Budget projections, the Director of Budget, Mr. Stephen Aworere, stated  that the year 2022-2024 MTEF is aimed at addressing the second term REDEEMED agenda of the present administration for the benefit of the people of the State.

Mr Aworere remarked that the rationale behind the adoption of MTEF was to ensure accurate estimation of resources available to the state within the medium term planning horizon.

He emphasized the need for all hands to be on deck towards increasing the Internally Generated Revenue of government so as to be able to meet critical needs of the people.

At the meeting, different professional bodies and other groups gave useful contributions on how to increase the Internally generated revenue of the state to finance the budget as well as meet the yearnings and aspirations of the people in terms of needed interventions in the society.