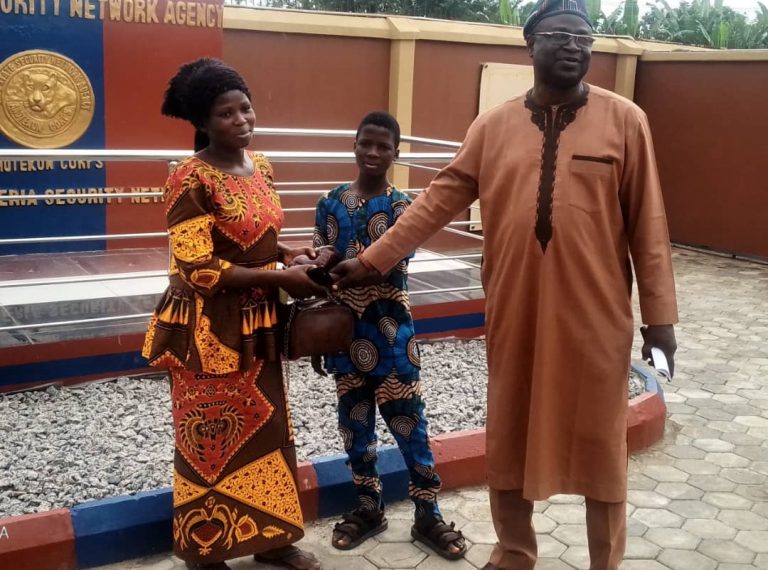 Men of the Intelligence Unit of the Ondo state security Network Agency codenamed Amotekun Corps have rescued a 14-year old Felix Adekunle hawker from the hands of kidnappers in Owo local government area of Ondo State.

SUNSHINETRUTH gathered that Adekunle, a 14-year-old JSS 2A student of Furaben International College, Owo, who was hawking slippers along an isolated area of Oke-mapo in Owo when he was abducted by three suspected kidnappers.

Adeleye said, “We got a distress call that some vehicles drove recklessly along  Benin/Owo road. While tracing the vehicle we later ran into the young boy who said he was running away from three kidnappers from Owo.

“The victim also explained that the only thing he could remember was a Camrry car without a plate number and having tinted glasses. He added that he became unconscious immediately he was pushed into the car.

“He explained to us that the area was isolated as he could not call on anyone.

“We took him away from the danger zone to our office where he narrated his experience that three men tricked him as a slippers seller that one of his goods has fallen off and dragged him into their vehicle and zoomed off to an unknown place as he excaped from the place.

“We would want to warn parents not to send their ward to dangerous places and every individuals should be careful of places they visit,” Adeleye said.

Narrating his ordeals, the Kidnaped victim, Felix Adekunle, said “It happened on Monday while he was selling slippers after school.

“I decided to come back to the market  for my sales. I took through Okemoko road which is a shorter root to the market were I saw three men that told me one of my goods have fallen down.

“I quickly dropped my goods from my head and went after the other one. I got there and couldn’t find anything,after which the men immediately dragged me into the vehicle and I became  unconscious.

“I later found myself in a dilapidated blue bungarlow in a forest. I saw a woman crying with her hands tied backwards sitting by a headless body of a young person.

“I asked her who was the person and she responded that it’s her child. At this period, I was hearing the men’s voices inside the house. The woman told me to remove the rope she was tied up with and we fled together.

“While fleeing, the woman fell. She called me back and gave me 500 naira and said I should keep running and never look back. I heard gun shots from the house where I was running which made me run as faster as I could.

“When I burst out of the bush, i saw some people selling bread by the roadside and narrated my ordeals to them. They called the police who did not respond and later got the Amotekun who responded swiftly and took me to their office.

He stated, “It happened on Monday while I was selling slippers after school hours. I decided to go to the market area to sell. I passed through Okemapo Road, which is a shorter route to the market. As I was going, I saw three men in a Toyota Camry car and they told me that one of my wares had fallen down.

“I quickly dropped the tray on my head to check, but I couldn’t find anything. Suddenly, the men disembarked from the car and dragged me into the vehicle and I became unconscious.

“I later found myself in a dilapidated blue bungalow in a forest. I don’t know the name of that area. Inside the building, I saw a woman crying with her hands tied to her back and I also saw the headless body of a young person.

“I asked the woman, who the headless person was and she responded that it was her child. At that moment, I was hearing the men’s voices in another section of the house. The woman later told me to untie the rope from her hands and we fled together.

“While fleeing, the woman fell. She called me back and gave me N500 and said I should keep running and never look back. I heard gunshots from the house while I was escaping; I had to run faster.

The Amotekun Commander had handed over the boy to his mother, Mrs Abosede Adekunle, who said she had been searching for her son, thinking that he must have misplaced the money from his sales and that might have made him stay away from home.

She thanked men of Amotekun for prompt rescue of her son.

“We were suppried to get a call from Amotekun that i should come and carry my son that was rescued from the kidnapers.

“I thank the Ondo State Government for setting up such agency to take care of situations like this.

“When i got to their office, I met my son in good condition as the officers have fed him even before my arrival. May the almighty God continue to protect them as they continue to judiciously discharge their duties,the highly elated woman prayed.”