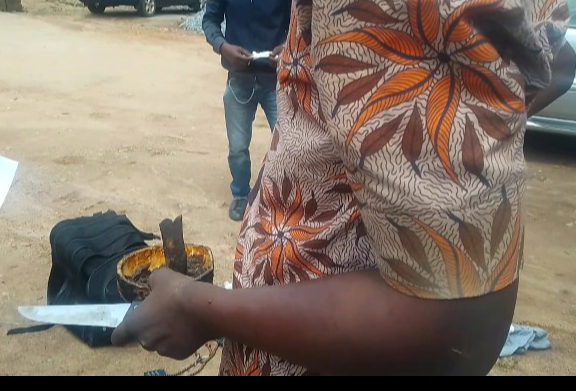 An 18year-old teenager, Segun Thomas who lived in Mushin area of Lagos State has been rescued by men of the Amotekun Corps from  the captivity of one 65-year-old Akorede Lawal who is a suspected ritualist and kidnapper in Ore, Odigbo Local Government Area of Ondo state; SUNSHINETRUTH can report.

It was learnt at the weekend that the boy who is undergoing training as an Automobile mechanic, left home for the mechanic shop on that faithful day and found himself at Ore in Ondo state.

According to report, it was said that the suspected ritualist requested for help  from Thomas who was on his way to his training workshop in Mushin and immediately obliged to help Lawal and took the bag from him, he started following him.

It was further gathered that while the boy was with the bag, he was interrogated by the man and he gave out information that his father lives in abroad.

The boy was asked to call his father immediately to request for money while they were on their way. On getting to Ore, the bag was taken from him by the driver as he was asked to pay his transport fare and that was when he regained his senses and this resulted to commotion between them.

It was said that men of the Intelligent Unit of Ondo Amotekun Corps who were on duty got tips of the situation and rescued the teenager from the man and arrested the suspect and whisked him to the Corps Headquarters in Akure.

Speaking with victim, Thomas who said he left home for the mechanic shop where he is an apprentice, a workshop very close to his house, met the man who asked him for a helping hand.

“On my way to the shop, I met this man that said I should help him to carry his bag that it was too heavy for him since he was carrying another bag.

“I took he bag from him, hoping he will soon get a vehicle that would take him to his destination. But helplessly, I found myself following him. He asked me about my parents and I realized I was answering him and was responding complying to all what he was saying.

“He asked me to place a call to my father who is living abroad to request for money. I agreed to that and we got to Ojota.

“We entered vehicle going to Ore.
When we got to Ore, the driver asked me to pay my money and took the load from me. That was when I regained my memory and realized that I’m already in Ondo state.

“An argument broke out which attracted the attention of the Amotekun men who eventually rescued me from the man.

Responding, the suspect, Lawal who said he was an ex- herbalist, and that he innocently asked the boy to help him carry his bag, added that he willingly embarked on the journey with him.

He explained that he is on his way to Akure to meet with his family.

Confirming the arrest, the State Amotekun Corps Commander, Chief Adetunji Adeleye, said “Men of our Intelligent unit posted around motor parks in Ore noticed some funny behaviour between the young boy and the suspect.

“On questioning, they found out that the boy did not know how he get to Ore. As far as the boy is concerned, he thought he was in Lagos.

“On interrogation, we realized he has debriefed the boy and found out his father lives abroad and asked the boy to call his father to send money while being hypnotised.

“He was brought to the headquarter and we got a clue that his mother lives in Lagos and placed a call to her.

The Amotekun boss advised parents to teach their wards to abstain totally from strangers.

“Yes, we were thought to render helps to the elderly, but nowadays it has become the other way round in our society today.

“Somebody respectfully assisted an elderly person not knowing he is a spiritualist. I think our children should be wary of visitors and be mindful of who they assist.

“lt is bad enough that Yoruba tradition is more of it. That means we have to be more careful in any situation”, he said.

Adeleye added that the suspect will soon be charged to court.

Also reacting, mother of the victim, a 42-year-old food vendor, Mrs Rashidat Babatunde who lives with her four children in Mushin,  Lagos State said, “I got a call at about past three from somebody that said he was calling from Amotekun.

“I told the person that I don’t know what they call Amotekun and that and I have not been to Akure before.

He said my son who left home at about 9am for where he was receiving training as a mechanic was found in Ondo state.

“Honestly, I got confused. I was directed to go to Ojota and board a vehicle to Akure and that when I get to Akure, I should ask of Amotekun headquarters.

“I want to thank the Corps for such such unbelievable gesture which rescued my son from his captor.

“I was not charged in any way, my son was handed over to me peacefully. I say kudos to the Ondo state government for setting up such an agency that is reliable and dependable”,she said.

Items found in the bag of the suspect included; two daggers, a Calabash with black soap, an animal horn, charns, six Mobile phones, a diary with telephone numbers and a radio.