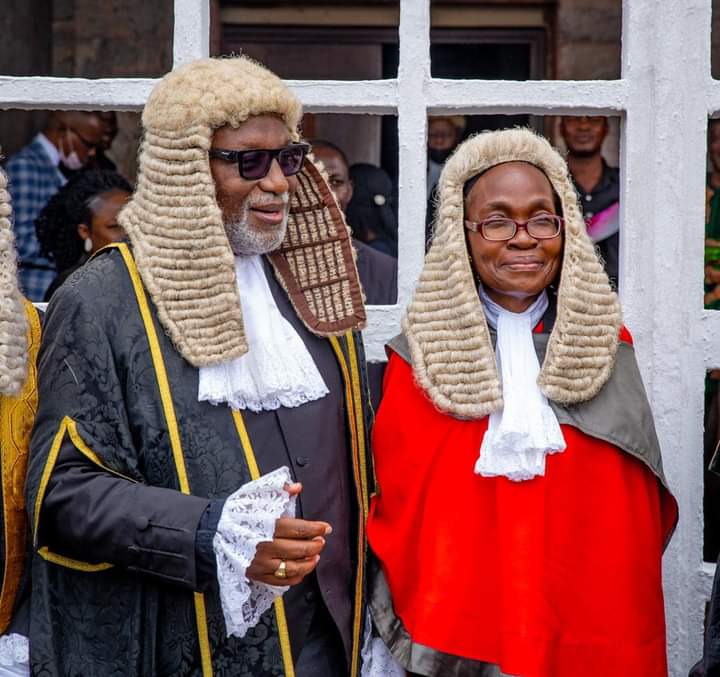 Ondo State Governor, Arakunrin Oluwarotimi Akeredolu has said that the people can only be better served if the three arms of government are allowed to act separately and independently as the constitution permits.

The Governor who said true liberty lies in the independence of the judiciary in all ramifications, stressed that the people will be the direct beneficiaries.

According the Governor, the Judiciary as the last arm, is the gatekeeper checkmating the proclivity of the other two towards excessive preferences.

Justice Akeredolu will retire on Sunday August 15, 2021, upon attainment of 65 years of age.

The Governor while congratulating the retiring CJ, said the state is proud of her meritorious services, just as he congratulated members of the Bench in the State Judiciary for the cooperation extended to the CJ all through her tenure.

He described Justice Akeredolu as a fair and incorruptible Judge who rendered quintessential services to the state.

“We continue to insist that the people can be best served if these institutions of State are allowed to act separately and independently as the Constitution permits. We have never, at any moment, sought to undermine this principle upon which modern societies, which embrace democracy, act.

“We stand here, with our heads erect in the knowledge that we have been able to shield all members of our State from wanton disregard to decency. It is our pride to have a very vibrant third arm of government in the State.

“Even a casual observer of events since we mounted the saddle cannot miss the remarkable feat. True liberty lies in the independence of the judiciary in all ramifications. The people will be the direct beneficiaries as this last arm is the gatekeeper checkmating the proclivity of the other two towards excessive preferences. our State judiciary has availed itself, creditably, in recent times”, the Governor emphasised.

Akeredolu who disclosed that judiciary has a major role to play in the development of the country, also noted that any judicial reform, which fails to recognise the present state of alienation of the institution of rectitude from the mass of the people, is a waste of time.

According to him, this system is distant, oppressive and retrogressive, adding that conscious steps must be taken to take justice to the grassroots in the interest of the generality of the people.

Akeredolu also said the current constitutional structure is a sure recipe for continual crises with the attendant underdevelopment, noting both the Federal and State judicial structures are too artificial and withdrawn from the current realities in a country as divergent as Nigeria.

” There have been tenuous attempts to redefine the functions of this very important arm of modern government to reflect the issues arising from the facts of divergence in our country.

“The inherited colonial structure is sustained, largely, a situation which renders any attempt at reforms cosmetic, ineffectual and, consequently, nugatory. There can be no remarkable progress if this system is maintained as it is at present.

“It is imperative that the current constitutional reforms proposed by the National Assembly must take into account certain fundamental principles which define a country with a federal system of government.

“The over-centralisation of all institutions of state in a country which prides herself as a Federal Republic underscores lack of readiness to advance. There has to be a fundamental shift from the present arrangement which best suits a colonial or military regime.

“The country must embrace the principles of devolution of powers and implement all useful recommendations in the interest of the generality of the people. The current system cannot engender development”, Akeredolu stressed.

In her Valedictory speech, the outgoing CJ, Justice Olanrewaju Akeredolu, specially appreciated God for making her retire in good health with many outstanding achievements under her leadership as Chief Judge of the state.

According to her, numerous achievements were attained in improving the administration of justice in the state, adding that she is leaving behind a legacy of meritocracy and called on her successor to sustain it.

Justice Akeredolu particularly lauded Governor Akeredolu for his total support for the state judiciary, adding his support has greatly contributed to her huge success at CJ.

There were goodwill messages from Akure branch of the Nigerian Bar Association (NBA); the body of Senior Advocates of Nigeria, represented by Akin Olujimi, SAN, and the Ondo state Attorney General and Commissioner for Justice, Sir Charles Titiloye.

Also present at the Valedictory Court session are members of the family of the celebrant; the SSG, Princess Oladunni Odu; Attorney General and Commissioner for justice, Sir Charles Titiloye; justices of the Supreme Court; justices of the Appeal Court within and outside the state, justices of Ondo state judiciary; both serving and retired justices; members of the Inner and Outer Bar, Senior Advocates of Nigeria,
Traditional rulers including Olowo of Owo, Oba Gbadegesin Ogunoye; the Osemawe of Ondo, Oba Victor Kiladejo; the Deji of Akure, Oba Aladelusi Aladetoyinbo, Bishop of Owo Anglican Diocese, Bishop Fagbemi, among several dignitaries within and outside the state