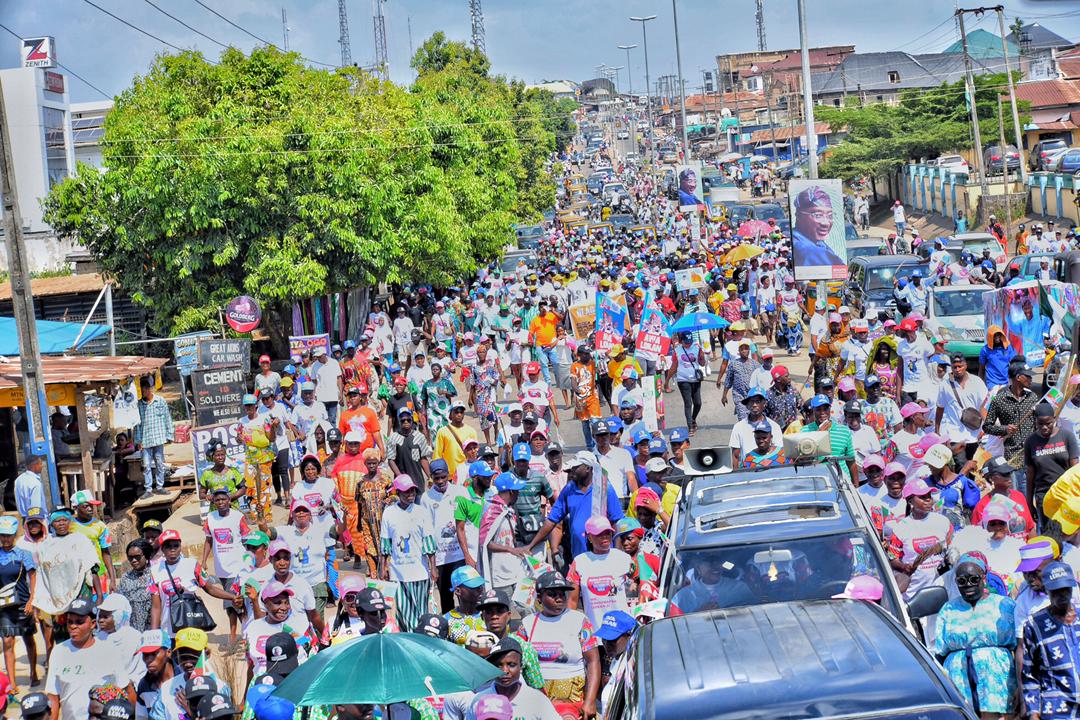 The ancient city of Ondo was thrown into a carnival like mood on Tuesday as some leaders of the All Progressives Congress (APC) in the city held a mega “Awalokan solidarity walk” to drum more support for the presidential candidate of the party, Asiwaju Bola Ahmed Tinubu and other candidates of the party in the state.

The well attended solidarity walk was led by some APC leaders in Ondo City including the Special Adviser to Governor Oluwarotimi Akeredolu on Political and Legislative Matters, Dr. Jibayo Adeyeye; Commissioner for Culture and Tourism, Mr. Wale Akinlosotu and his counterpart in Commerce, Industry and Cooperative Services, Deaconess Lola Fagbemi.

Others at the rally are Abiola Makinde (Member of the House of Reps); Otunba Moyinolorun Ogunwumiju; Biola Oladapo; Oladiji Landmark and Adeniyi Adegbonmire (SAN), Chief Olawale Fasakin, among several other leaders and supporters.

The mega rally which was organized as part of the campaign for all APC candidates both at the federal and state levels in the forthcoming 2023 general elections was also attended by mammoth crowd of Ondo sons and daughters.

The rally kicked off at the popular Akure Motor Park in Ondo with party supporters and loyalists coming out in large numbers wearing the party’s T-shirts, caps and brandishing their brooms with enthusiasm while singing and dancing to the delight of everyone who expressed nothing but joy and hope for the emergence of the party at all levels come 2023.

The enthusiastic supporters sang and danced across the nook and cranny of the city as they presented their candidates to the good people of Ondo kingdom to be voted in come 2023 general elections.

Speaking at the event, Dr. Jibayo Adeyeye declared that the people of Ondo city have decided to throw their weight behind the APC presidential candidate, Asiwaju Bola Tinubu and all their candidates for the 2023 general elections in the state, saying that is the essence of the solidarity walk across the city.

The Special Adviser emphasised that Tinubu would bring the desired change and redefine governance in the country with his weath of experience as former Governor of Lagos State.

On his part, Mr. Wale Akinlosotu said all the APC candidates including the Senatorial, the House of Representatives and the State House of Assembly are credible and reliable.

“They have been tested and we know that they are all credible. The state Governor, Arakunrin Oluwarotimi Akeredolu (SAN) is performing. If we look at the report that just came out from the federal government, Ondo state is the least poor state in the whole of Nigeria. That is something to celebrate. Akeredolu is working for us in Ondo state”, the Commissioner added.

Also, the House of Assembly candidate for Ondo West Constituency 1, Moyinolorun Ogunwumiju declared that Ondo East and West Local Government Areas are solidly behind the ambition of the APC and will deliver for the party at the 2023 polls.

“This is a statement from the people of Ondo that we have all come together as one to deliver for the APC. As we can all see, our leaders believe in the youths and that is why we have youths candidates like Ogunwumiju for Ondo West Constituency 1, and Abiola Oladapo for Constituency 2. It shows that the APC is committed towards ensuring that young people are at the helms of affairs”, he stressed.