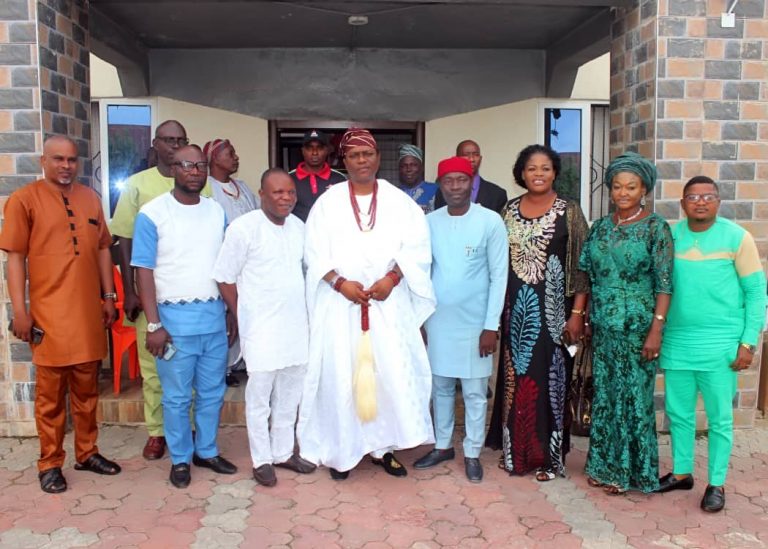 Oba Ogunoye passed this vote of confidence when the Association’s newly elected Executive Chairman, Chief Kemini Doubra led other members of the executive on a courtesy visit to the monarch in his palace on Wednesday 21st July 2021.

In his address, Chief Kemini Doubra revealed that the visit is the first of such after the members of the Association gave the present executive members the mandate to pilot the Association’s affairs.

The visit according to the Chairman was to congratulate the monarch on his ascension to the throne of his fathers, to familiarise with him and celebrate him as an alumnus of the prestigious university.

Chief Doubra equally used the opportunity to intimate the revered monarch on the immediate and future plans of the Association under his leadership.

According to him, ”the welfare of all our members across the state is a topmost priority. Consequently, the Association is set to have a database for our members.

Chief Doubra said “Efforts are equally being made to have a functional Secretariat which will be our rallying point.

“We are equally determined to make positive contributions to the development of our alma mater and the society at large”.

Chief Doubra assured that the executive, under his leadership will not disappoint the royal father and that the Association will always consult him for support and advice when situations demand.

He reiterated that his administration will always be guided by its ”TAC” mantra of Transparency, Accountability and Commitment.

In his response, Oba Ajibade Gbadegesin Ogunoye III who thanked the Chairman and his team for the visit, also congratulated them on their victory at the poll.

This he said is an indication of being found worthy by their members.
The frontline monarch affirmed that products of the institution are doing well in every sphere of life; having been trained to be responsible and courageously surmount life’s challenges.

The Olowo revealed that a good number of them are occupying strategic leadership positions in the Ondo state public service and across the country.