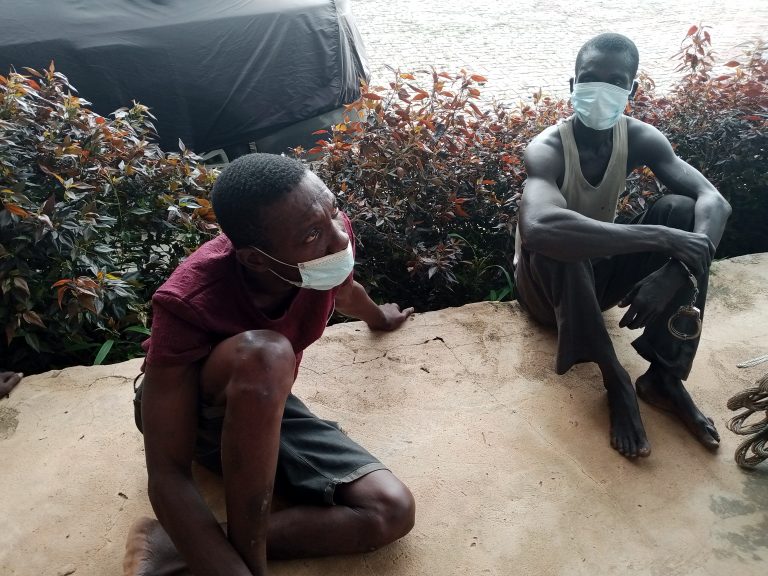 Luck has run out of four robbers as the Ondo state Police Command paraded four man gang arrested for allegedly specialised in robbing and killing of POS Operators and Filling Station attendants in Akure metropolis; SUNSHINETRUTH can report.

It was learnt that the notorious armed robbers are Deji Ajayi, 22year-old; Babajide Adewole also 22years; Dare Adeoye 24years and Banjo Adu 27year-old, were alleged to have stormed Oke Aro area of Akure in January this year rob a POS shop and killed the owner, Solomon Ehingbe.

Parading the twelve suspects in Akure, the state Commissioner of Police, Mr Bolaji Salami said a serial rapist that ambushed and raped women in their farms within Ore axis.

Mr Salami said out of the twelve suspects, five arrested for armed  robbery, two persons for rape, four suspects for Shop breaking and one for Vandalizing and stealing of Government Property.

The Police commissioner disclosed that the suspects would be charged to court on the conclusion of investigation.

“It is my pleasure to welcome you to this Press Briefing as a means to keep you and the good people of Ondo State abreast of the recent feats achieved by the Command; especially the arrest of a four (4) man gang whose specialty is robbing and killing of POS Operators and Filling Station attendants in Akure metropolis, a serial rapist that ambushed and raped women in their farms within Ore axis and other Crime Suspects that were arrested in other parts in the State as outlined below:-

“ARMED ROBBERY/MURDER: On the 26th of January, 2021, at about 2100hrs, a four man armed brigands stormed Owe-Akala area of Oke-Aro, Akure and robbed a POS shop belonging to late Solomon Ehingbe ‘m’, in the cause of the attack; he was shot on the chest which subsequently led to his death.

“The robbers all masked later escaped on a motorcycle. Immediately the case was reported, Policemen attached to the Anti-Robbery Section of the Criminal Investigation Department of the Command kept their heads on the swivel to monitor the activities of crime within Akure Metropolis and this led to a breakthrough in which the notorious gang was tracked down and apprehended in their hideouts

“These same young men on the 23rd of December, 2020, at about 0813hrs invaded Ifeoma Restaurant located around NEPA area of Akure, fired gunshots into the air and robbed the director of the Restaurant, Chief Joseph Okeke of the sum of One Million, Two Hundred Thousand Naira Only (1,200,000.00) cash, being proceeds from the sales of the day and also carted away handsets of customers who were at the scene.

“They confessed to the commission of the crimes and will soon have their day in court.

“On the 6th   July, 2021, at about 0645hrs, one Ibrahim Ademola ‘m’ of No. 18, Fasae Close, Canaan land Ijoka, Akure was attacked and dispossessed of Toyota Hummer bus 2010 model with registration number. AKR 11 XC at gunpoint by a gang of Armed Robbers in front of Chicken Republic at Roadblock, Akure.

“Following the robbery attack, patrol teams were immediately alerted and they gave a hot chase to the fleeing robbers and swooped on them at Akure-Ilesha expressway where they engaged the robbers in gun duel, neutralized one and arrested one Omoyajowo Gbenga ‘m’ aged 43 and recovered the robbed vehicle. He will soon be charged to court.

“Gang-Rape:- On the 26th July, 2021, at about 0700hrs, one Ernest Omodayo ‘f’ of Heavenly joy Akotogbo came to the Station and reported that on the same date, as she was coming from a party with her sister, one Igbekele Ajenode ‘m’ and four others accosted her, forcefully dragged her into a room and had carnal knowledge of her against her wish one after another.

“Two suspects, Olanrewaju and Igbekele had been arrested while effort is ongoing to arrest the fleeing ones.

“Arrest of Serial Rapist: On the 5th  August, 2021, at about 0830hrs, one Oluwakemi Isaac ‘f’ of Tajudeen Street in Ore, came to Ore Police Station and reported that on same date at about 0700hrs, she sent her daughter Fatima Yahaya on errand, on her way going, one Stephen John saw her, grabbed and dragged her into the bush and raped her.

“After the suspect was arrested to Ore Police Station, three women came and reported against him as the one who raped them at their different farmlands with the aid of a cutlass. He will soon be charged to Court,” Mr Salami said.