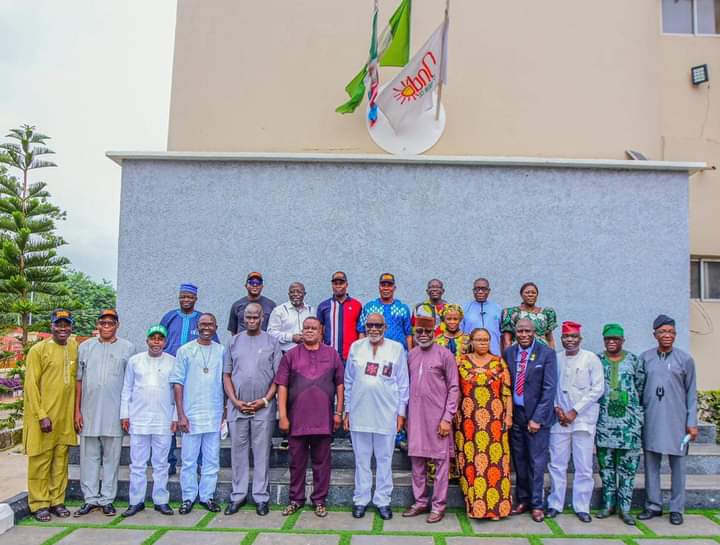 •Says He Is A Sincere Politician

Chairmen of local governments in Ondo State, under the umbrella of the Association of Local Governments of Nigeria (ALGON), have congratulated the Ondo State Governor, Arakunrin Oluwarotimi Akeredolu, SAN, over his victory at the Supreme Court last week.

The Supreme Court had last Wednesday upheld the victory of Governor Akeredolu at the October 10, 2020 governorship election and dismissed the appeal filed by Eyitayo Jegede, SAN, and the Peoples Democratic Party (PDP).

The council bosses led by the Chairman of ALGON in the state who doubles as the Chairman of Akoko Southwest Local Government, Hon. Augustine Oloruntogbe, described the Supreme Court’s verdict as a victory for the people of the state.

The chairmen lauded Governor Akeredolu’s style of politics and approach to governance, stressing that he has shown the world that politics can be played in truth and sincerity

They also thanked the Governor for purchasing for the councils brand new caterpillars after fifteen years since such intervention was last witnessed at the various local government areas.

“Your victory is our victory. The victory is for Ondo state in general. We are here to rejoice with you and thank you. This time last year, a lot of pressure was on you that you should not conduct our election.

“Even when people were saying it might affect your election, you said let it affect it. I know it was not easy to conduct election as at that period when you were seeking re-election. God looked at your heart and your intention for the good of Ondo state and God has vindicated you.

“Your voice was the loudest on the issue of insecurity. Many thought you wouldn’t survive it but you have survived it. You are speaking for the people. We want to tell you that we will continue to follow your footsteps.

“On behalf of the staff of local governments in Ondo state, majority of them speak well of you and say the Governor doesn’t touch local government money, we thank you. The level of salary payment we have been able to achieve is because you don’t touch our money. We are paying the local government 102 percent for July. With this, it is obvious that your government is entrenched in the grassroots.

“We thank you for the purchase of our brand new graders. People are witnessing unprecedented development in the state despite the paucity of funds,” Oloruntogbe said.

Responding, Governor Akeredolu said the victory and success recorded at the Supreme Court is dedicated to God, noting that only God deserves the praise and honour.

He charged the council chairs to be above board and continue to man their respective local governments with vigor and passion for the development of the people.

Governor Akeredolu, while speaking on the recently procured brand new caterpillars, admonished the chairmen to maintain them and refrain from deploying them for personal use.

He said: “Whatever victory, whatever success that we have recorded is laid at the doorestep of God alone.

“Specially for the victory at the Supreme Court, we need to thank God. It could have been otherwise. I must thank you for all you have said. As you said, we had pressure not to hold your election. We thank God that we had the courage to do it. You have done so well in your positions till now.

“Yes. I don’t participate in your Joint Allocation Account Committee (JAAC). When your money comes, it gets to you.

“On the Caterpillars, make sure you manage them so well. Don’t plough them for personal use. For over 15 years, no one ever bought these caterpillars. The new ones, maintain them. Use them in a good manner. To have this maintenance culture is rare. Put someone in-charge of that.

“We have financial challenges. The only thing for you is to get creative. Do something in your own local governments and let us know. Do something that is peculiar to you.”