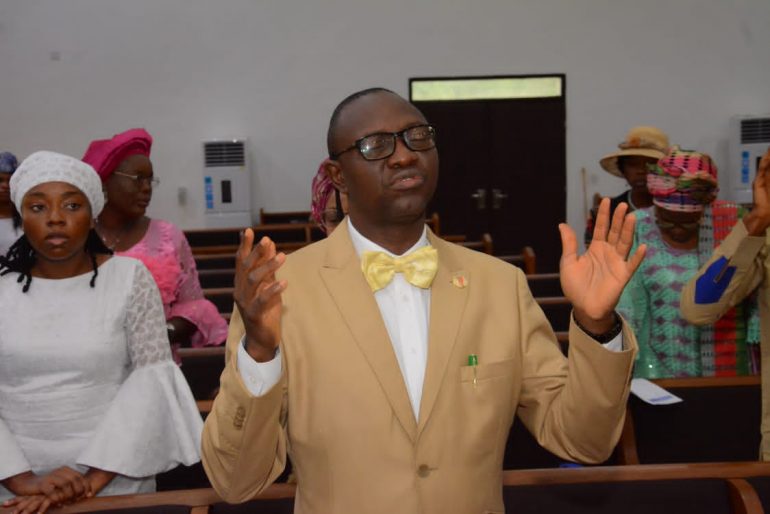 The 1979/1984 set of the Old Students Association of the Akure Muslim College has at the weekend held a reception to honour one of their members, Pastor Kayode Ogundele for his recent appointment as the Ondo State Head of Service.

Members, who could not hide their joy at the event, took turns to eulogise Pastor Ogundele and used the occasion to appreciate the state governor, Arakunrin Oluwarotimi Akeredolu, SAN for counting one of them worthy of the exalted position.

Speaking with newsmen, the Coordinator of the group, Engr. (Dr.) Felix Elerundu expressed optimism that the new Head of Service could not afford to disappoint the state given his track records coupled with the sound up bring during their days at the college.

He noted that it was a thing of joy that a product of the college emerged as the Head of Service at this time, which he said necessitated the organisation of the event in his honour.

‘Everybody is happy. We are excited that one of us has been appointed. It’s a good omen for us.’ Elerindu said.

Also in their separate interview with journalists, the first Senior Prefect of the college, Alhaji Suleman Gbadebo and his female counterpart, Mrs Idowu Adesida, thanked Governor Akeredolu for appointing a product of their alma mater.

They used the occasion to call on members to always remember the school which they described as their source.

In his reaction, the Head of Service, Pastor Ogundele while reminiscing the fond memories they shared way back in their school days, that them for the well-attended event.

He used the occasion to call on other such associations across the state to always find ways to give back to their alma mater which had given so much to them, saying the task of funding education should not be left solely to the government.

In his words, ‘That is what we need in our society. We must be ready to give back to our alma mater and our societies because we came from those societies or alma mater… It’s a way of complementing success ‘.

‘Mr. Governor is committed to working on developing all our educational institutions; primary, secondary and tertiary.’ He further said

‘A lot has been done in the primary and he has been emphasising he wants to focus on the secondary education too. The are some things in the pipeline. Arrangements are on some intervention programmes that will lift some of our secondary schools in Ondo State.’ He added.

The government and workers in Ondo State have begun weekly joint church service at the Chapel of Grace with the premise of the Government House, Alagbaka in Akure the state capital.

Speaking at the first edition of the joint service, the state Head of Service, Pastor Kayode Ogundele, who led a large number of civil servants to worship God at the service said the initiative was to further enhance the bond of unity between the government and workers in the state.

While describing the Chapel the first alter and the alter that stood for the whole state, the Head of Service thanked Governor Akeredolu for granting permission for willing civil servants to join him to worship at the government house chapel, saying it was the beginning of good things between the government and the workforce as a family.

In his words, ‘ as they say, a family that prays and worships together, stays together. So this will build greater bonds between the government and the people who are driving the machinery of the government’

‘It is a great privilege and honour to have civil servants coming to the Government House; the chapel that represents the whole state.’ He added.

While giving assurance that more civil servants would continue the weekly church service henceforth, Pastor Ogundele, on behalf of the entire workers in the state, commiserated with the governor over the recent departure of his mother, Evangelist Grace Akeredolu, praying for the repose of her soul.

Also addressing the congregation, the chaplain of the chapel, Venerable Kunle Babalola lauded civil servants for coming to worship at the Government House, saying that explained the robust relationship between government and the workers

In his sermon titled ‘Jehova Ebenezer’, Pastor Sam Neye urged the congregation to always look on to God for their help as no man could help but God.

Reading from the book of first Samuel Chapter 7 verses 1 to 12, Pastor said God was ever ready to help, defend and protect as many as cried unto him for help.

The service had in attendance many top government functionaries such as the Special Adviser to the governor on Education, Dr Wumi Ilawole, Permanent Secretary, Ministry of Education, and Mrs Lola Amuda among others.

Sina Adeyeye
Office of the H.o.S