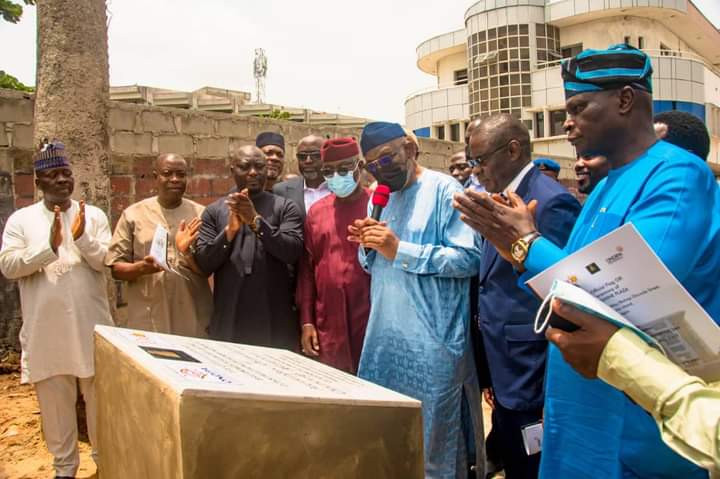 ONDO HOUSE in Lagos is an Eyesore, Akeredolu sets to redeem it 25yrs after

Ondo State Governor, Arakunrin Oluwarotimi Akeredolu, SAN, on Wednesday bemoaned the abandonment of the state’s property by previous administrations in the state for a period of 25 years.

He described it as an embarrassment to the people of the state.

Governor Akeredolu lamented that the palpable rot in the then abandoned building of the state in Lagos was symptomatic of what transpired in government in the years past.

Governor Akeredolu disclosed that the building was among the Oodua House which was shared among the member states in the Southwest.

He expressed disappointment that the one allocated to Ondo State has been an eyesore having been totally neglected.

Arakunrin Akeredolu noted that the abandoned building misrepresented the state and what it stands for, stressing that he is determined to change the narrative despite paucity of funds.

“Government plans to erect an edifice which the present and future generations will consider enviable. It is going to be the first development at this site in 25 years. It is also the first in the series of our most ambitious projects in the city of Lagos.

“It is our fervent hope that we shall all assemble here in the next 24 months to commission this important project. This investment of N3billion naira promises to yield bountiful dividends for the people of Ondo State. Investment in real estate is the current trend in global economy. Our State will avail herself of the immense benefits accruable from it.

“This very land, upon which we all stand, bears testimony to the courage and industry with which we have handled the affairs of the Sunshine State since we mounted the saddle of leadership. It is our wish to always approach issues of governance and development with uncommon courage and determination to succeed. We have come to showcase the exemplary act of industry for which our people are reputed.

“We made a solemn pledge to the people of Ondo State that their welfare and overriding interest shall be the directive principle of the state policy under our watch. As a corollary to this avowal, we proclaimed that there would be no abandoned project by the time we would be leaving office. Today’s ceremony punctuates, significantly, this linear progression in the last five years.

“We take a great measure of pride in this act of redemption. The abandoned building which once stood on this land misrepresented us as a people. Apart from the evidential waste of our commonwealth, it was an abuse of hospitality to the host State. The place constituted a serious security risk to the immediate community as undesirable elements had turned it to their den,” Governor Akeredolu said.

The Governor explained that the SUNSHINE PLAZA will be a Twin Seven-Story office structure with 21st century amenities.

He added that it will be a restorative project for the pride of the Yoruba race and represent the collective interest and identity of the people of Ondo State whom he described as the most sophisticated and indomitable.

The CEO, Prestigious Home Limited, the contractor handling the project, Akintola Oladejo, who commended Governor Akeredolu for his openness and exemplary leadership quality, promised to justify the confidence reposed in the company and deliver a quality project to time.

The CEO, ONDIPA, Mr. Boye Oyewumi, applauded Governor Akeredolu for not politicising the development of the state, saying the Governor has always put the best interest of the poeple of the state at heart in his quest for development.

Dignitaries at the event include: the Deputy Governor, Hon Lucky Aiyedatiwa; Chief of Staff to the State Governor, Chief Olugbenga Ale; and other members of the State executive council.

Other dignitaries include: the Chairman of ACCESS Bank PLC, Dr Dere Awosika, MFR; Dr Segun Olugboyegun, a Board Member of ONDIPA and Managing Director of Estate Links, Mr Gbenga Olaniyan; among others.