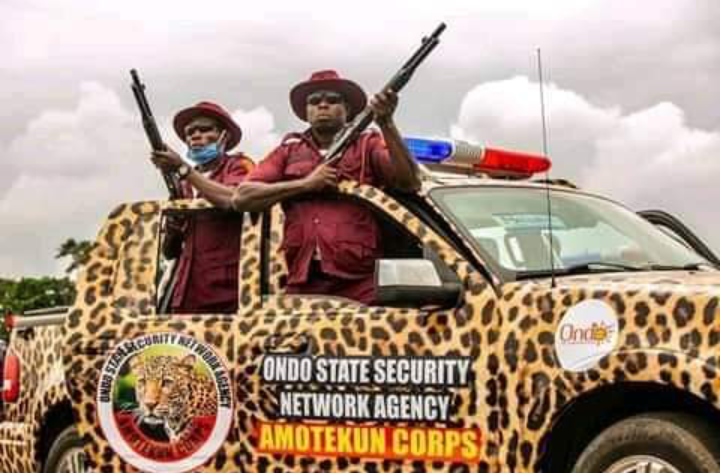 Ondo: How Ritualists kidnapped me at my Shop —Hairdresser, as Amotekun rescues her

An Ore-based Hairdresser, Morayo Ayeni has narrated how she was hypnotised at her shop before she was rescued by men of the Ondo State  Security Network Agency codenamed Amotekun Corps, at the weekend from kidnappers den by suspected ritualists along Ore/Akure highway in the State.

She said, “A lady whom I’ve never seen before, walked into my shop and she said she wanted to make her hair. But I told her I was going for our association’s meeting. She claimed she was going somewhere and just needed a little touch.

“I asked her to step aside to enable me clean up the shop, then she got a phone call, she picked it and started telling the person to stop disturbing her and hung up the call angrily.

She said the man called the lady again and she described her salon for him.

“As I was sweeping, I saw a black Camry car with tinted glass pulled up infront of my shop. Then, the man alighted and told lady, that, “This  is me that you said you can’t recognize.”

“The lady denied knowing him. So, as the man was approaching my shop, I kept staring at him, and suddenly he tapped me and said, , “What about you, hairdresser, don’t you recognize me?”

“I felt like I was electrocuted and I told him that I’ve never seen him before and he said, ”why am I even talking to you too? You see that car over there, go and enter into it.

“That was all I could remember. By the time I regained consciousness, I heard someone telling me to wake up. I heard him talking to someone on the phone that he had been able to pick the ladies and were at the Plaza,” she added.

“The victim narrated further that someone called the man and instructed him to ensure they do not escape.

“The lady was the first person they pushed inside the bush, and she fell down and sat. The guy behind me also pushed me down. When  I fell, I looked at his face, and saw that he was looking elsewhere. That was how I took to my heels. I didn’t look back.

“I was just running, the man that drove us mentioned the guy’s name which I have forgotten and told him that, ” if that lady escapes, you will be the one to be killed. When I heard that, I increased my speed.

“I was running and crying. Then, the Amotekun men saw me and asked me what happened? And I told  them to take me to where I can board a cab back to Ore where I was kidnapped.

“He asked me to enter and asked if I could follow him to Amotekun’s office, I said yes and he drove me to the Corps’ headquarters,” the Victim said.

Reacting to the development, Ondo State Commander of the Corps, Akogun Adetunji Adeleye, admonished citizens of the state to be more vigilant and careful with those they make contact with.

Adeleye who is also the Chairman of the Council of Amotekun Commanders in the South-West region, said that the victim had been rescued, while efforts were ongoing to arrest the perpetrators.