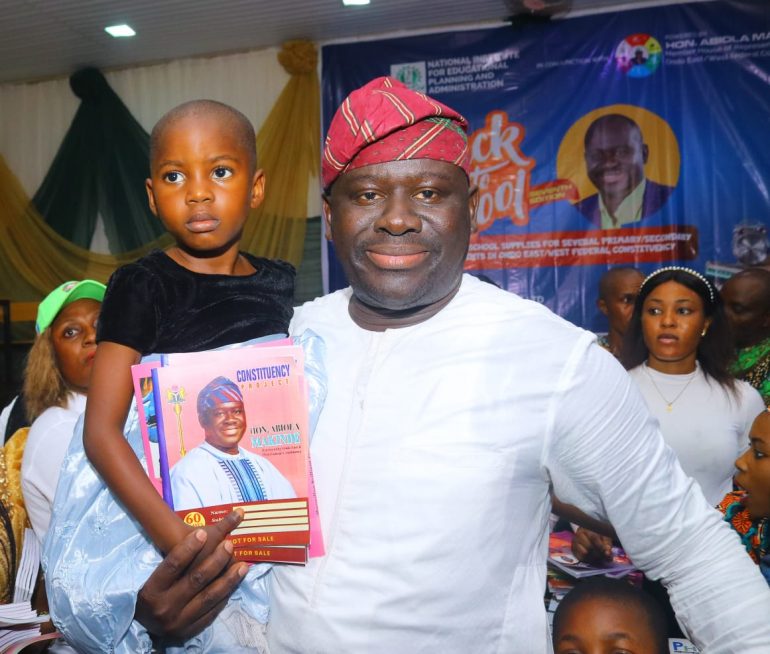 The project tagged, “Back to School” is among the several initiatives of the Lawmaker aimed at assisting parents, guardians, in acquiring the much needed items needed by their children and wards in the new academic session in their respective schools.

The event which took place at the Royal Event Hall, saw to the donation of text books on different subjects, notebooks, laptops, desktop computers, instructional charts, school bags, lockers and other learning aids to the students.

Also, the Federal Lawmaker who is also the Deputy-chairman House Committee on Federal Character, donated several teaching aids materials to the management of several schools both at the primary and secondary school level across the Federal Constituency.

While donating the items, Hon. Makinde said the event which is the 7th edition was not only designed to assist the parents and wards of the students and schools involved but also to encourage the students to seek academic excellence in the new session.

He also stated that his led representation is determined to ensure that students in the federal constituency receives the much needed support to thrive in their academics.

The event which was attended by political appointees, APC party leaders, supporters and loatlists across Ondo East and West, was hailed as a timely gesture to students of the constituency in the wake of their recent resumption across the state.

The Lawmaker also disclosed that he would be having the ground breaking of the construction of classrooms, office and storage in Epe Community on Monday, September 26th, 2022.

A parent of one of the beneficiaries of the “Back to School” project while speaking to newsmen after the event appreciated the lawmaker for his kind gesture.

According to the parent who identified herself as Mrs. Adeyemi stated that the gesture of the Lawmaker is one which must be emulated by other public officers in the Federal Constituency and State at large.

Another parent who only wanted to be known as Mr Ajibade appreciated the House of Rep member, citing the program as a huge relief at this economically overwhelming time.

In an ecstatic mood, he reiterated how Hon Makinde had made light, his parental obligation to his ward.