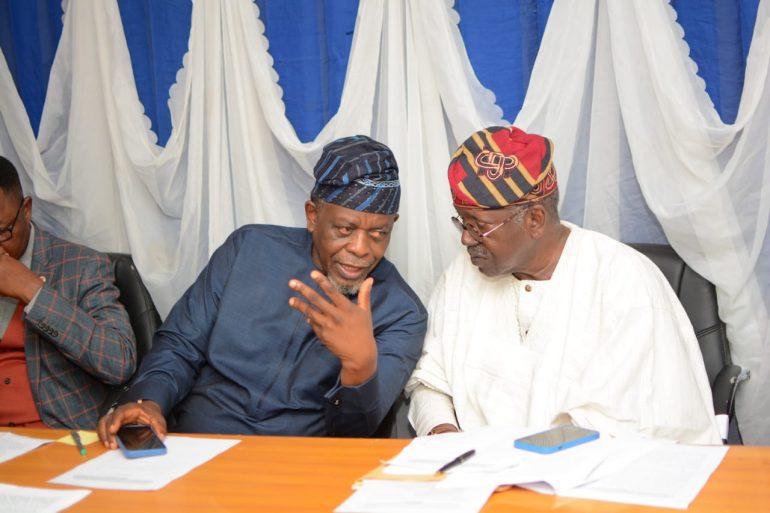 The Revenue Mobilisation Allocation and Fiscal Commission (RMAFC) says it is verifying and reconciling revenue collections in the Solid Minerals Sector of the Economy.

The Federal Commissioner, RMAFC, Chief Tokunbo Ajasin stated this at a strategic meeting on the Commission’s 2022 nationwide monitoring of revenue collections of the Nigerian mining sector in Ondo State, held at the Ministry of Finance Conference hall, Alagbaka, Akure.

Chief Ajasin, who led the team, said 25 enterprises exported minerals in 2019 with no record of royalty payment, while the total sum of #2.76bn outstanding liabilities have been established against 2,119 mining companies nationwide, which he said arises from failure to pay the Annual Service Fees for their respective mineral titles.

However, he did not provide the names of the companies.

According to the Federal Commissioner, the Commission was empowered to monitor all revenue accruals from the extractive industries to ensure prompt and accurate remittances to the Federation Accounts.

He added that the monitoring was a follow-up on the 2016 exercise to assess the challenges hindering optimum revenue collection from the sector.

Chief Ajasin said the monitoring comprises revenue collections and the activities of miners in the state and local government councils–phase II.

According to him, the major issues of concern to the Commission is the Nigeria Extractive Industries Transparent Initiative NEITI 2020 report.

He stressed that the revenue loss of the non-responsive companies was put at N54.25 million, and the number of defaulting companies will be determined after engagements.

“There is also the issue of underpayment of royalty by 25 enterprises that exported minerals in 2019 with no record of royalty payments,” he said.

“These companies owe the government about N482 million in overdue royalty.

“There is equally the issue of N2.76 billion outstanding liabilities against 2,119 mining companies nationwide, which arose from the failure to pay the annual service fees for their respective mineral titles.”

Ajasin also said the Commission’s mandate in the extractive sector was to recover the established liabilities owed to the Federation Account.

He therefore urged all participants to explore the opportunities in Ondo State to harness the revenue potential in the Solid Minerals sector to boost Internal Generated Revenue.

On his part, the State Commissioner  for Finance Mr Wale Akinterinwa, stated that the process of allocating the 13% derivation on crude oil paid to the States across the Nation is dependent on the effective monitoring of revenue and the collection of established liabilities from Minerals resources from the state.

Mr Akinterinwa noted that the cooperation and collaboration given by the Ministry of Finance, Ministry of Energy, Mines and Mineral Resources, Ministry of Local Government and Chieftancy Affairs and other relevant stakeholders in the state to enforce payment of the reported Liabilities would go a long way in fulfilling the objectives of the exercise and a means of engaging some Strategic Revenue Drive ( SRD) for the State.

The Commissioner, who assured that the present administration under the leadership Arakunrin Oluwarotimi Akeredolu SAN, would do everything at its disposal to facilitate the collection of revenue as listed in the NEITI Audit Report 2022. He therefore urged all stakeholders to accord full cooperation to the RMAFC team and be committed to achieving the desired goal.

Also the Permanent Secretary of the Ministry, Rev. Jide Ekpobomini said sourcing for a quick alternative to all income was necessary and could not be overemphasized.

He said government revenue inflows will surely be boosted if this sector if vigorously harnessed.

Also his counterpart from Ministry of Energy, Mines and Minerals Resources, Engr. Wemimo Ogunsanmi said that the state government had initiated a strategic mineral development plan to exploit the solid minerals sector hence the establishment of the Ministry.