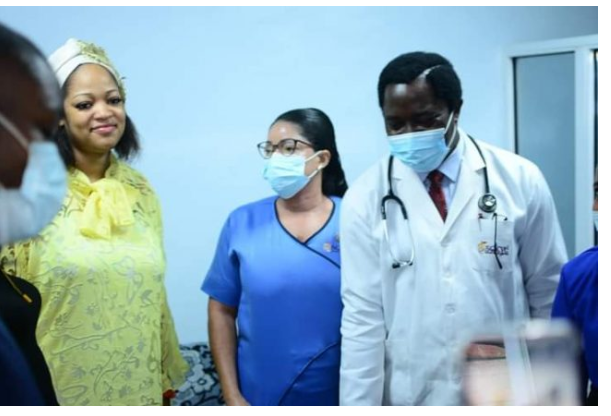 The recent down tools by medical doctors in government hospitals nationwide is now a source of concern to the wife of Ooni of Ife, Olori Silekunola Naomi Ogunwusi, even as the third wave of the deadly coronavirus pandemic continues to ravage Nigeria and other parts of the world.

The Ooni’s Queen has therefore passionately pleaded with striking members of the Nigerian Association of Resident Doctors (NARD), to “consider the situation in the country” and call off the indefinite strike embarked upon on August 2.

Olori Ogunwusi, who made the plea while presenting items to mothers and newborn babies at the Sckye Hospital, Akure, Ondo state capital, said it was imperative for doctors to consider the health standard of the citizenry and call off the strike because it could lead to loss of lives and any life lost would never be regained.

Recalled that NARD started a nationwide industrial action on August 2 over welfare and other conditions of service to members.

Olori Ogunwusi who was conducted round the hospital by the Founder of the Hospital, Dr Thomas-Wilson Ikubese, commended humanitarian services being rendered by the Senior Medical Practitioner through his Sckye Hospital and other initiative.

She said, “I will first of first say that duty comes first and the work of medical doctors are sacred, actually close to the work of God, its a passionate profession that is beyond money.

“It is about fulfilment and I will just encourage our resident doctors to call off their strike for the sake of common man in this country.”

Olori Ogunwusi while appealing to government at seeing the need to come into good terms with the striking doctors at ending the strike in the interest of the common man.

“Our government should also do something about the strike urgently, since in any sector of the government, the health sector is very important, it is how you treat doctors they will also treat patient. So our governments should do something so that these doctors can call off their strike immediately,” she said.

Olori Ogunwusi who also commented on the good infrastructure met at the Sckye hospitals said, “it is a very lovely place as we all know that health is wealth, Sckye hospitals is a healthy environment, you can see the neatness and it is a kudos that a place of such can be in the centre of Akure, Ondo capital city to serve humanity.”

Dr Thomas-Wilson Ikubese, described the gesture by the Ooni’s Queen as unprecedented and commendable.