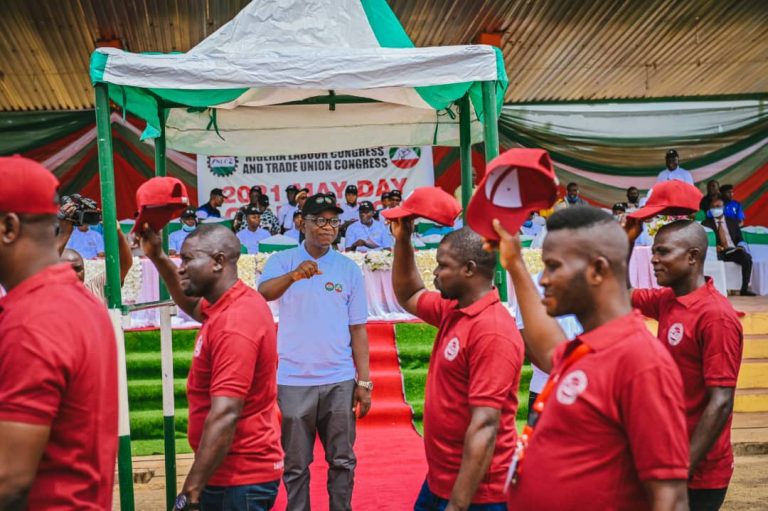 Percentage salaries in Ondo: When will this End?

STAGGERING SALARIES FOR ONDO CIVIL SERVANTS, WHEN WILL THIS END? …..Dr. Akeredolu O.N

Aketi has tried for the state despite the meagre resources at his disposal, we must all support and encourage him to financially liberate the state like what Tinubu did in Lagos state, otherwise, this perennial problem will persist, even if an angel becomes the Ondo state governor tomorrow

You need to be a devil for you not to feel concerned about the happenings in the state . The civil servants in Ondo state are wonderful , dutiful and productive. Recently, the tide has changed for the public servants in the state. The tensions and agony of these people are palpable everywhere in the state despite all efforts by Aketi to ameliorate this unpalatable situation.

The total number of these public employees in the state should be below fifty thousand(50,000) both for the state and 18 local governments which is < 2% of the state population of three million people. As small you may think they are, they control about 70% of the transactions in the Ondo state currently. Invariably, anything that happens to them affects more than 70% of the state.

This is different from state like Lagos state where the private sector dictates the runnings of the state and also employed bulk of the working population. This issue of staggering salaries has become perennial issue, from time of Evangelist Bamidele Olomilua to this present administration, people have been pointing accusing fingers to the government of the day and this ugly trend has not changed.The essence of this article is for us to rub minds together on way forward. This issue of salary payment in the state is an emergency, we all need to come together and find a lasting solution to this monster of staggering salaries.

Owing salary under any guess is anti-moral , anti-Biblical and anti- Islamic , but with the present economy of Ondo state, even a saint or an angel as the governor will have no option unless, he will do money ritual to pay the workforce , because all human efforts have failed the present caring government of Arakunrin in taming this ugly situation

The leadership of state labor unions has tried its best in assisting the state government and ensures no state worker loses his/her job. These labour leaders are always at the receiving ends, the state government believes they are not sincere with the realities on ground during negotiations. The civil servants also believe that their leaders have been compromised or bribed, this is their plight and price of leadership for them. Despite their sacrifices, I have this advice for them, they should work with state government on how to find lasting solution to this issue, instead of this present surface -dressing approach.

*PREVIOUS ADMINISTRATIONS IN THE STATE*

The experiences of the civil servants in the state were not palatable during the ignoble rules of military administrators in the state.The treatment meted out to them was nothing to write home about. The late Gen. Abacha led government of the country was the worst as many civil servants almost lost their lives to the famine of his reign.

During the little stint of Evang. Bamidele Olomilua as governor of old Ondo state ( now Ondo and Ekiti states), the era of Ikere Ekiti born diplomat was characterized by unending drama. I remember vividly though as child then, that he came on air i.e on television and he was working mathematics on the state monthly incomes i.e both IGR and federal monthly allocations.

He later concluded that the state then had no enough money to pay her teeming workforce and sacked some of them. This so called government was so confused to the extent that he re-absorbed some of the sacked workforce back because his government couldn’t pay their gratitude and pensions.

Late Chief Adebayo Adefarati and late Dr. Agagu led administrations were a bit lucky in this regard, the economy of the state was stable and they had no issue with regular payment of salaries.

Immediate past administration of Dr. Mimiko in the state, started on a good note, was paying 13th month as bonus and some incentives. Civil servants were even paid before month ending, this didn’t last long as he ended up impoverishing the state and left with unpaid seven months salary arrears.

Aketi’s government started well, paid six out of seven months salary arrears and he was paying as at when due until the onset of Covid- 19 pandemic that crippled state and federal economy. Mr. governor had to borrow five billion naira to augment the last month allocations and paid 170% for state civil servants that covered the rest of December 2020 and Jan. 2021.

Now, the latest allocations from federal accounts after statutory deductions and debts remain about 2.8billions naira and the state government will need up to #600 million to augment even if it must pay the proposed 60% of salaries to the civil servants. As usual, the state workforce rejected the offer through their unions.

The question is that , when are we going to overcome this staggering salaries? From Evang. Olomilua , Dr. Mimiko to Aketi, this story is the same. For how long are we going to continue this way? It is now obvious that issue of this unstable salaries goes beyond any governor of the day but depends on reality of present economy.

Despite the unusual performances of Mr. governor in all sectors, one thing Mr. governor must do to have his name indelible in the hearts of Ondo state, is to liberate the state from depending on monthly federal allocations. This will be the best legacy he can leave behind for the state after the completion of his 8 years of impactful governance .

He needs to take some drastic steps in the tax systems for the state and other means of revenue generation must be effectively explored irrespective of whose ox is gored, this perennial monster must stop.

Arakunrin should be encouraged to do the needful, the state can’t continue with the old story, he should crown his efforts of taking the state to the height of our dreams by financially liberating the state which I believe our Mr. governor can do. The state unions of civil servants should work with government on long term financial stability plans and not the present surface dressing approaches. I believe we can do it ,we will do it and Ondo civil servants will never forget Aketi’s drastic actions in the same vein Asiwaju Ahmed Tinubu is being celebrated in Lagos state today.

Happy workers day celebration to Ondo state civil servants. With Aketi, we have great days ahead.