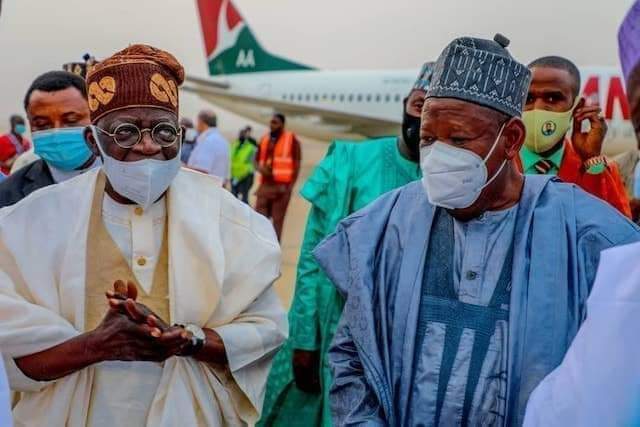 What Tinubu said at Arewa House in Kaduna…. (see full text of his Speech)

………as Tinubu stumbles at Arewa House lecture in Kaduna

All Progressives Congress chieftain, Bola Tinubu, tripped over his foot and stumbled on Saturday in Kaduna State.

A video footage posted by @daily_nigerian showed the former Lagos State governor crashing between two chairs on arrival at the 11th Arewa House Lecture in Kaduna.
Tinubu was quickly supported by his aides and nearby guests.

The 68-year-old politician was not the first politician to stumble in public. Just last week, 78-year-old US President, Joe Biden, lost his footing and tripped multiple times while walking up the steps to Air Force One.

…Sardauna, others laid the foundation of our nation – Tinubu

President Muhammadu Buhari and National leader of the APC, Asiwaju Bola Ahmed Tinubu have on Saturday at the Arewa House Kaduna, extolled the virtues of the late Premier of Northern Nigeria, Sir Ahmadu Bello who was described as a visionary and transformational leader.

President Buhari, represented by his Chief of Staff, Prof. Ibrahim Gambari during the Arewa House Annual Lecture, said late Ahmadu Bello was an institutional leader per excellence who worked across ethnic and religious lines to build bridges.

Asiwaju who was chairman of the occasion said in his remarks that contributions made by the Sardauna can never be overstated.

While commending the Arewa House for their effort in promoting informed discussion, the former governor of Lagos state recalled that Sardauna had worked with other shining light of histories such as the Sage, Chief Obafemi Awolowo and Dr Nnamdi Azikiwe who laid the foundation of the nation destined to be the leader in Africa and a model for black men.

Speech by HE Asiwaju Bola Ahmed Tinubu as chairman of the 2021 Sardauna Memorial Lecture held on Saturday, March 27, 2021 at the Arewa House, Kaduna.

It is an honour to chair an auspicious occasion like this.

It’s a rare opportunity to stand in this hallowed place where Sir Ahmadu Bello, the late Sardauna of Sokoto, lived. The Sardauna was more than just the premier of the Northern region, he stood among the founding fathers of our great country.

The nation-building contributions made by Sir Ahmadu Bello can never be overstated. More importantly, they should never be forgotten. He laboured tirelessly and with great tact and intelligence. Working together with other shining lights such as the late sage Papa Obafemi Awolowo and the esteemed Nnamdi Azikiwe, this great Sardauna of Sokoto helped establish Nigeria as one indivisible and independent nation. He was one of the chief architects and builders laying the foundation for the nation destined to be the leader of Africa and a model for the black race. It is upon the foundation laid by these extraordinary men that we must continue to build so that Nigeria may achieve its manifest destiny and realise the promise of a greatness too long deferred.

Let me at this point commend the organizers of this auspicious event for their consistency and perseverance in holding this lecture series which, over the years, has served as a platform to discuss issues of serious national importance. For a nation to know where it’s going, it must first know from where it comes.

The topic; Reduction of the Cost of Governance for Inclusive Growth and Youth Development in Northern Nigeria In a Post-COVID-19 era, is more than timely, particularly given the serious security challenges that have become one of the primary causes of despair and frustration among all Nigerians, young and old alike. That frustration and despair are, in large part, caused by chronic poverty and the breakdown in social institutions wrought by such longstanding suffering.

In the midst of our local challenges came the COVID-19 pandemic, with its debilitating impact on the global and domestic economies. Nigeria, like many other countries, has not been spared the impact of the pandemic.

Commendably, however, President Muhammadu Buhari has been carefully steering the country through the pandemic such that the negative impact on us and the economy has not been as harsh as it might have been. The economy’s relapse into recession has ended but we must admit the economy remains weak with too much unemployment and resources left idle.

Cost of governance is always a key factor in the socio-economic development of any nation. But it is also one side of an important coin. We must not look at the cost alone. We must weigh the cost against the benefits derived therefrom. For example, one can pay a high cost on a productive enterprise but reap a higher benefit. Such would be considered a good investment. However, one can pay a low cost but reap no benefit at all because the endeavour was inherently unproductive. This would be a waste. Thus, we must be careful in what we say and truly mean when we talk of the costs of governance.

The development of any populous nation has always been dependent on the ability of government to allocate sufficient funds to projects and programs that create and encourage enduring growth and employment. We must reject that mode of thinking that assumes government expenditure is inherently unproductive as well as harmful to the overall economy.

It is not the fact that government expenditure is intrinsically wrong any more than one can say all private sector activity is economically positive. Government can be wasteful or it can be the key component to growth just as a private sector business can function profitably or spend itself into bankruptcy. The issue is not whether government is spending money or not. The real issue is the economic utility and quality of the expenditure.

Fiscal wisdom but not necessarily austerity is required for an economy like ours in a time like this, to ensure equitable wealth redistribution and meaningful use of resources. The years have shown that the private sector is much too weak to spur the growth we need. If the private sector could manage this feat, it would have already done so. Where the private sector is too weak or unable, the government must fill the void. This means government must not be afraid to embark on an activist fiscal policy to create jobs, build infrastructure and develop our industrial sector as well as continue to improve agriculture. This means government must spend money but spend it on those things that bring the requisite economic returns for the nation.

Here, one must make the point about the urgency of the need to think outside of the box in finding solutions to the challenges posed by our unemployed youth. Because of the currency issuing power of the federal government, it is not bound to balance budgets like individuals and state governments are. Moreover, because of this currency power, federal expenditures are not constrained by federal tax or revenue intake. Just as importantly, what I advocate is something that can be applied to both the common and unique developmental challenges of the north and south so that the nation moves in unison without any group or region feeling left out or estranged from national progress.

Thus, while states and local government must shape their budgets to fit their revenues, the federal government can and should spend more to create more jobs for the youth in both the north and south which is key to eradicating restiveness and sundry criminality among the youth. Take a look at the world. Those nations that recovered most quickly from the 2009 economic crisis and now from COVID-19 are those nations that most engaged in government stimulus spending to revive their flagging economies. This was not by accident. It is due to purposeful policy and the deeper understanding of the nature of money and a the role of a national government in saving a flagging economy. Thus, America recently embarked on US$1.9 trillion stimulus to buoy the economy. It was not said that this government spending would erode jobs but that it would create them. Thus, we should not be so against government spending. If it is for the right purposes, it can do essential things that the private sector cannot. What we should be against is wasteful government spending.

Building vital infrastructure such as irrigation and water catchment systems will help agriculture, arrest desertification and provide jobs. Only government has the power and resources to call forth such a program. Another readily available area primed for investment is the agro allied industry which, for the northern region is particularly advantageous.

Urban populations are growing but urban jobs are not. Here, government must implement a national industrial policy to encourage key industries that begin to employ this growing urban work force.

Like I said in my recent statement on the pressing issue of the herder and farmer dispute, we must appreciate that martial security measures alone will not suffice. Problems that are essentially of an economic origin must also have an economic solution. Enhanced security may be the necessary first step, but it cannot be the only step. We cannot resolve this problem by holding on to one-dimensional answers.

We must all be dispassionate in our search for solutions. These challenges are multi-faceted and so shall the solutions must be.

The issue of insecurity, poverty, unemployment and extremism have many things to do with governance, over time. At bottom we must tackle our deep and widespread poverty. If we limit government’s role under the erroneous assumption that government spending is intrinsically unproductive then we tether ourselves to failure. We would do well to more critically study how other populous nations such as the UK, US, Germany and China charted their course during their formative years. You will see that they did not adhere to small government or the purportedly free market. Government engaged in massive spending on infrastructure and education while also engaging in policies that protected industrial development and key aspects of the agricultural sector. Only when they matured and held advantages over other nations, did the UK and US begin to champion free markets and small government. We would do well to understand this history and learn what it means for our own pursuit of development.

Permit me to close by thanking our chief host, Kaduna State Governor, Malam Nasiru el Rufa’i and commend his graciousness and his strong support for this event. Once again, I thank the organisers of this auspicious event. I too look forward to the contributions of the day’s speakers, led by the Keynote Speaker, His Excellency Governor Simon Bako Lalong, Governor of Plateau State.

I’m honoured and remain indebted to Ahmadu Bello University Zaria and Arewa House for permitting me the singular pleasure of chairing this occasion.
Thank you!