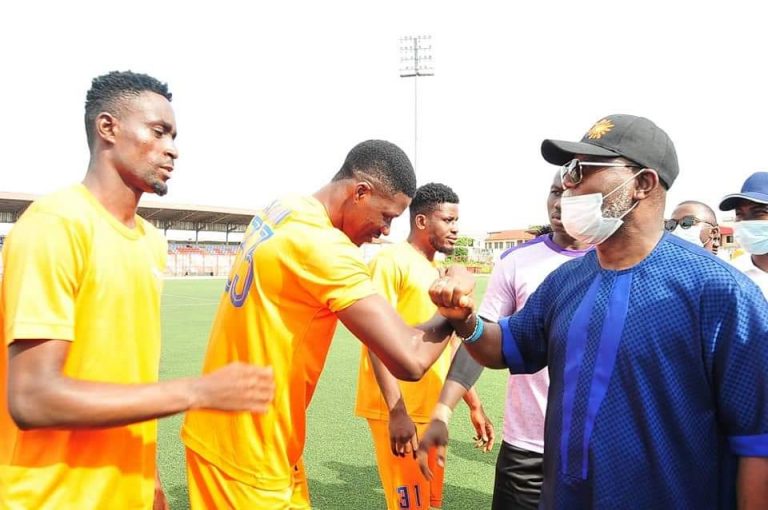 There was nothing to separate Sunshine Stars FC of Akure and Jigawa Golden Stars as they played out a barren draw in an NPFL matchday 21 game at the Ondo State Sports Complex.

Sunday’s match was Sunshine Stars’ first on home turf in about two months, following a two-game banishment to Lagos, where they ended the first stanza of the league, before resuming actions in Uyo on matchday 20.

On their return, the Deputy Governor of Ondo State and Chairman of the three-man Committee overseeing the club, Lucky Aiyedatiwa, was at the stadium to catch the actions alongside the Attorney General of the State, Charles Titiloye Esq who is also a member of the committee.

As proceedings kicked off, the Owena Whales dominate the affairs but Jigawa activated their resilience, intercepting whatever they could and blocking every attempt.

The closest Sunshine Stars was to breaking the deadlock was Sunday Emmanuel’s curling effort in the 38th minute.

Before halftime, right back, Ebuka Akobundu was stretchered off due to an injury and was replaced by Emmanuel James.

After the restart, coach Gbenga Ogunbote rang few changes on the team, but the team still found it difficult to break their opponents down.

Before the full time whistle, injury dealt another blow on Sunshine Stars, as centre back, Jamiu Alimi limped off and was replaced by Abisoye Olatunde.

It ended goalless at the end of the game with attention shifting to the next away trip against FC IfeayiUbah while the Ondo team is still in relegation zone.