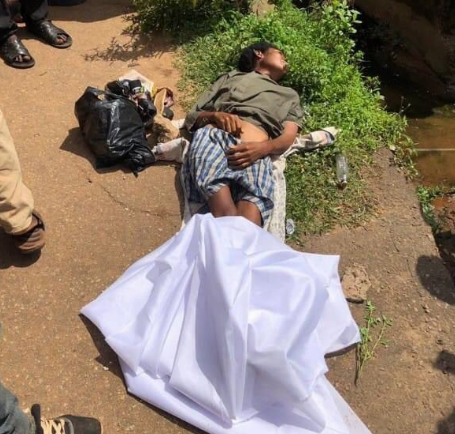 There was a confusion this morning in Akure, the Ondo state capital when  residents of Oke Ijebu Area of Akure, found a corpse of a middle-aged lady along the road in the area on Tuesday.

SUNSHINETRUTH had earlier reported that suspected ritualists alleged to be yahoo boys used the lady for ritual money and later dumped her corpse beside the roadside.

According to the some of the residents, the corpse was dumped infront of a church auditorium in the area by some unknown people suspected to be ritualists

They said some items such as cream, sponge, tablets, bra, and clothes packed inside a black nylon were placed beside the corpse. Also a telephone number was written on a small sheet of paper with a name Joy , was also inside the black nylon.

A commercial motorcyclist, who identified himself simply as Ojo said the residents of the area woke up on Tuesday morning to find the corpse of the lady beside the road.

“We just woke up this ( Tuesday) morning and saw the corpse of the lady . The way we saw the matter , it looked as if some people have used her for ritual purpose and when she died they dumped her corpse beside the road in the midnight and fled. But the matter has been reported to the police,” he narrated.

When contacted, the Police Public Relations Officer in the state , Mrs Funmilayo Odunlami confirmed the incident but said no foul play was suspected in the matter .

She said “a case of a dead lady found was reported but no mark or sign of violence found on her. We have commenced investigation into the matter”