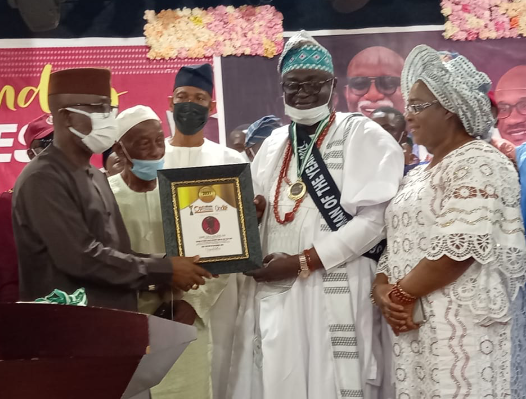 ….SAYS “WE WILL MAKE ONDO STATE UNCOMFORTABLE FOR CRIMINALS”

It was colourful evening and glitz at the weekend when who is who in the society gathered to celebrate the Corps Commander of the Ondo State Security Network Agency, codenamed, Amotekun Corps, Chief Adetunji Adeleye who bagged “A Security Man of the year”, even as he declared that the agency will make the State uncomfortable for criminals.

Adeleye was honoured on Sunday during the 14th anniversary of The Hero Magazine, during a colourful ceremony held at the International Event Center (The Dome), Akure, the state capital.

Governor Oluwarotimi Akeredolu was represented at the occasion by his Deputy, Hon Lucky Aiyedatiwa.

The Corps Commander dedicated the Award to Governor Oluwarotimi Akeredolu, all the officers of Amotekun Corps and the people of Ondo state for their uncommon support and determination to checkmate activities of criminals in the state.

Adeleye, while appreciating God and the executive Governor of Ondo State, Arakunrin Oluwarotimi Odunayo Akeredolu (SAN) who is also the Commander-in-Chief of Ondo State security network agency for creating a conducive atmosphere for him to perform, promised that the security network will continue to strive to make this society a crime free one.

The Commander said “I thank the good people of Ondo State for giving us the support we needed to achieve and all other security agencies for collaborating with us, because security is not a one man business, it is an issue of synergy and I want to say expressly that I enjoy this kind of support from all security agencies in Ondo State.

“Amotekun is a baby of necessity in the sense that globally, especially in Nigeria, security has been a major problem and this was what prompted the executive Governors of the six states in the South West to come together and brainstorm to bring a solution, since one of their primary assignments as chief executive is the provision of adequate security to lives and property of residents of their states”.

Adeleye further added that it is the result of their brainstorming that brought to bear Amotekun in the first place, it is an organization put in place to compliment the security architecture of the South West. “We will continue to do more, we are striving more”, he said.

The Chairman of the event, Prof. Akinbo Adesomoju, Pioneer Pro-Chancellor and Chairman Governing Council, Olusegun Agagu University of Science and Technology, Okitipupa, in his remark, congratulated the award recipients and Ondo State in diasporal, urging them to continue with whatever they have been doing. While commending Ondo State Amotekun Corps Commandant, Adesomoju stressed that he had read so much about what Amotekun Corps have been doing because people are now talking about Amotekun.

One of the award recipients, Prince Benson Babatope David, in his response, said that insecurity can be tackled by good governance.

He said that most of these things that are happening is because of poverty level of the people. His words “poverty can make someone do what he or she is not supposed to do. When good governance comes in place, I believe that a lot of things will change”.

The Vice Chancellor, Adekunle Ajasin University, Akungba Akoko, (AAUA), Prof. Olugbenga Ige stated that two years ago, the security of the state cannot be compared with what is happening right now with the advent of Amotekun.